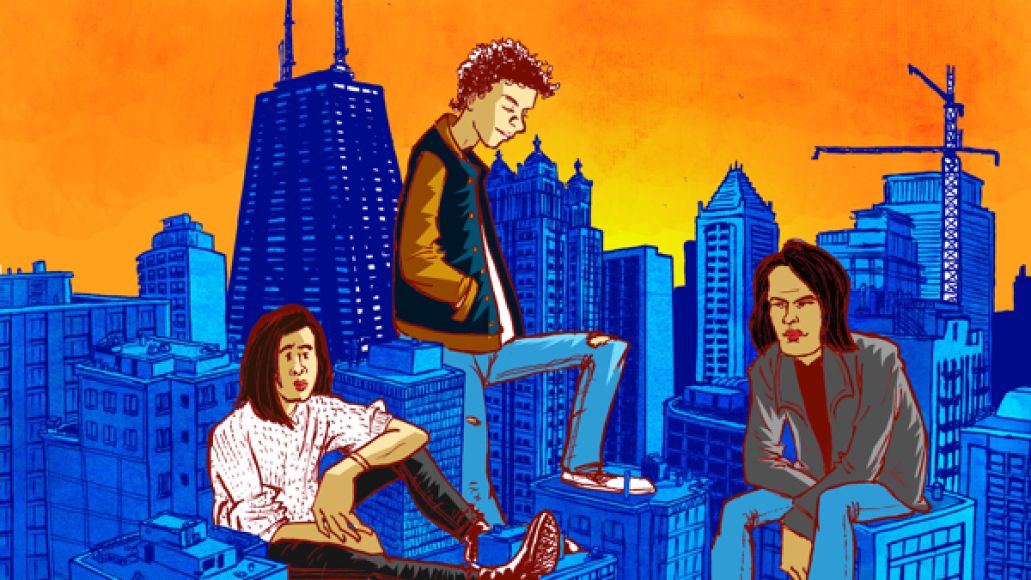 Around 2002 or so I saw a pre-Zooey Deschanel M. Ward open for Bright Eyes. Smushed against the front rail, I watched in wonder as the then-unknown guitarist’s nimble fingers surfed the fret board, creating a sound most musicians would need three instruments to make. On guitar, Smith Westerns’ Max Kacacek (whose mother, FYI, is an excellent Chicago playwright) is really nothing like Ward, but I’ll be damned if I didn’t find myself just as smitten. Cullen Omari’s a fine front man and his bass-playing brother, Cameron, is an arresting live presence, but the Westerns’ distinctiveness really lies with Kacacek’s shimmering riffs, which routinely build to cathartic solos that bridge the band’s glam, punk, and classic rock influences.

A pair of Dye It Blonde deep cuts (“End of the Night”, “Only One”) kicked off the set, giving way to two standouts from this year’s underrated Soft Will. The final minute of “Fool Proof” is already one of the best minutes I’ve heard this year—soaring, celebratory, melancholy—but Kacacek’s noodly flourishes gave it a toothy, satisfying live edge that helped usher in “Best Friend”, one of the many Westerns tracks that wouldn’t be out of place on the Dazed and Confused soundtrack. Dye It Blonde standouts “All Die Young”, “Weekend”, and “Smile” made late-set appearances, as did “My Heart”, unfortunately the only inclusion from the band’s self-titled debut.

The Omari brothers have come off as insufferable in interviews and early live performances (just see their AV Undercover contribution), but their early 20s find them gracious and pleasant onstage, if somewhat lackadaisical. Cullen’s lazy attempts to get a mosh pit going right before “Idol”—a decidedly non-moshy song—felt cheap and half-hearted, and his request to skip the traditional encore format and just dive into “3 AM” and “Varsity” was funnier when Blink 182 did it. But on the whole, the Smith Westerns prove themselves a reliable live band, one that knows how to craft a satisfying set and perform it with equal parts competence and spontaneity.

Chicago born and bred, the band saw plenty of hometown support last night at Lincoln Hall, where gaggles of old schoolmates populated the VIP section with supportive caterwauls and laments about their looming last years of college. Openers Wampire, on the other hand, saw a lighter crowd as they launched into songs from this year’s enjoyable Curiosity. Chintzy billows of fog occasionally washed over front man Rocky Tinder’s garishly sparkly shirt as the set progressed, but it was bombastic songs like “Magic Light” and a ghostly cover of Kraftwerk’s “Das Modell” that eventually won over the crowd. The band wisely saved its best two tracks (“Trains” and “The Hearse”) for last, by which point the audience was more than happy to bop along, suds splashing across their skinny jeans.

It’s easy to view the Westerns (and Wampire) as a group of unaffected, detached kids who make music compatible with most recreational drugs. But beneath all that ironic fog there’s an earnestness to both groups, a palpable yearning clouded in the insecurities of youth. If you can’t see it in the floppy-haired Omaris just yet, look to Kacacek, whose stunning guitar work deftly forges the band’s beating heart.