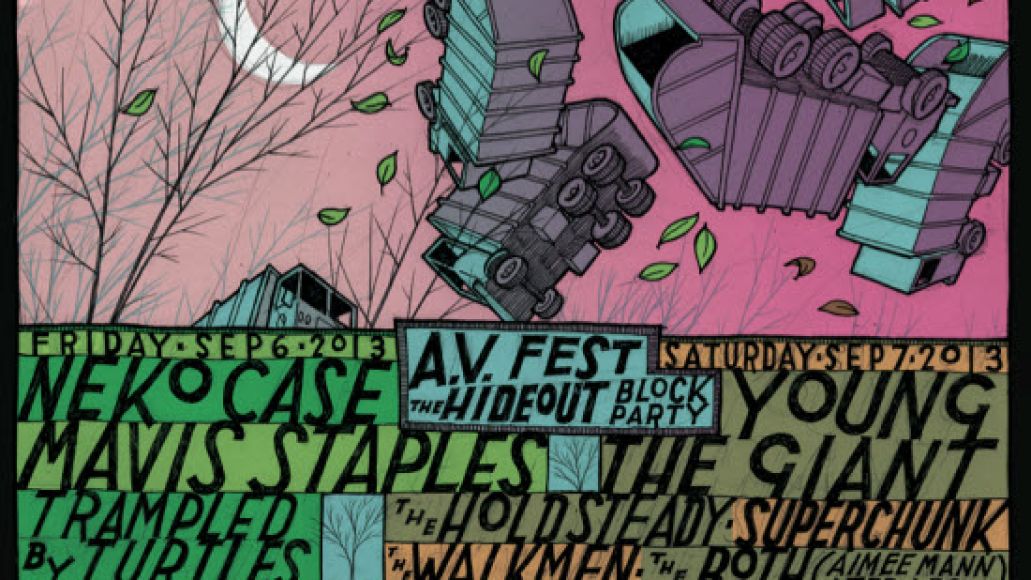 “Good. I’m glad. And that’s what makes me cool: not caring. Right?”

Omit the last word of that quote from The Simpsons, and it could have been said by The Hideout’s co-owners, Tim and Katie Tuten. Their annual Block Party—in conjunction with The A.V. Club (possibly our favorite pop culture site out there)—has never been about what’s buzz-worthy, but rather community, as well as bands the storied, ramshackle venue knows and loves. Funnily enough, the above quote is also from “Homerpalooza,” a Simpsons episode that skewers the commercialization and outlandishness of larger-scale music festivals.

Now don’t get us wrong. We love Lollapalooza and Bonnaroo as much as anybody. But it’s nice to end the summer in a more relaxed fashion, in a parking lot that still feels like someone’s backyard. Yes, it’s much smaller than pretty much any other festival in the city. Yes, there’s only one stage. Yes, it’s kid-friendly. Yes, there’s an emphasis on safety. And yes, those porta-potties stay jaw-droppingly pristine throughout most of the two days. 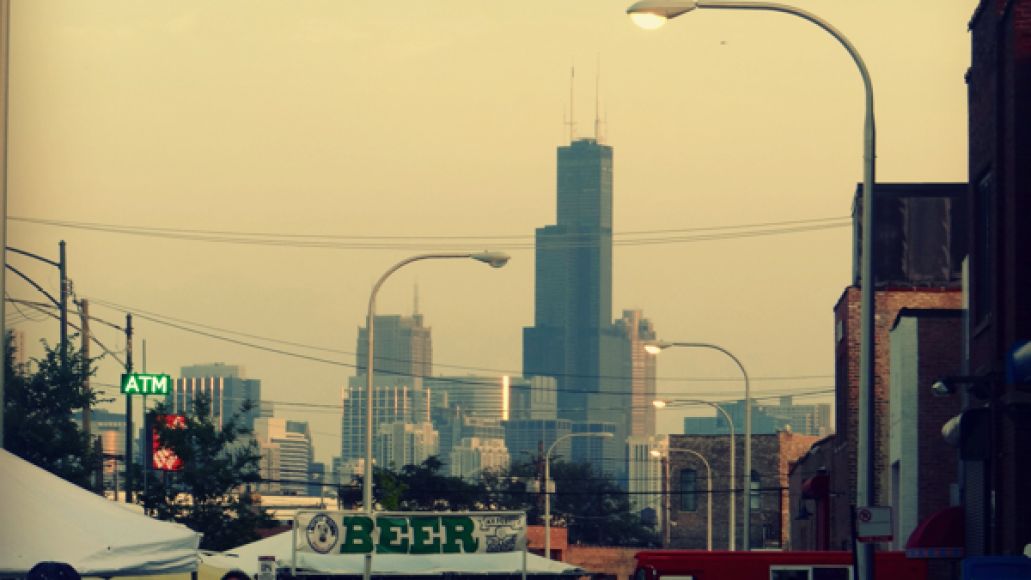 But hey, we’re not here to talk about sanitation, even if The Hideout is only a stone’s throw away from the garbage truck army of Fleet Management. We’re here to talk about the music. In honor of The A.V. Club‘s house style for their reviews, we’ve given each act’s set a letter grade, in addition to including a few choice Stray Observations. The only one we regrettably didn’t get to cover was Brooklyn punk trio Nude Beach, as our work schedules only allowed us to catch the second half of their set. However, we can attest to their crack musicianship, scrappy stage presence, and the big-chord catch of their tunes.

Besides being just plain good, most of the other bands at this year’s festival have exhibited considerable staying power, regardless of how much airplay they’ve gotten. As for Nude Beach and their fellow younger acts? Well, only time will tell. But The Hideout and The A.V. Club like them. And for now, that’s good enough for us. 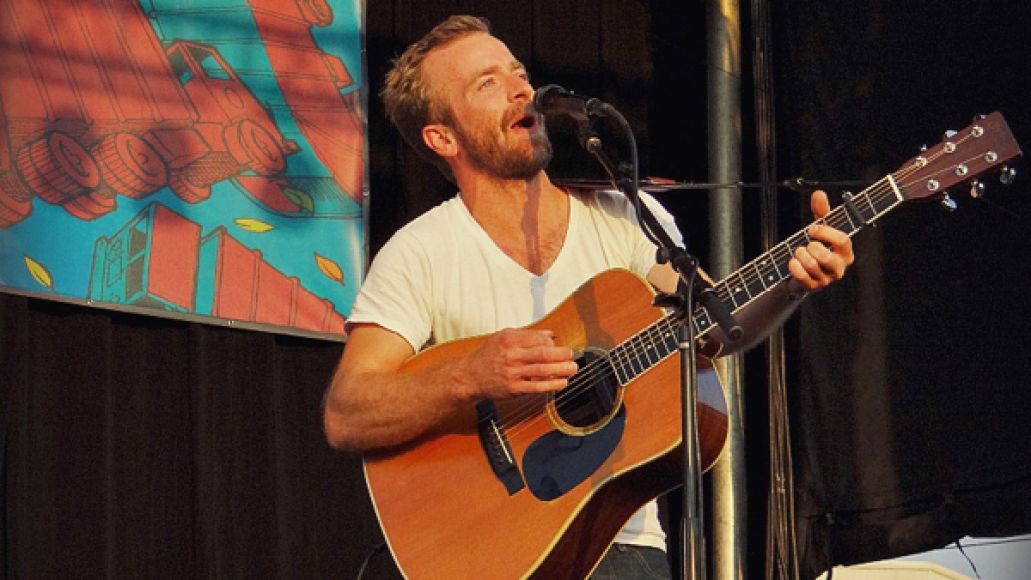 Something I never thought I’d say about a summer festival set: I wanted more slow songs. Maybe it’s my lack of appreciation for bluegrass-inspired indie rock, but the furious mandolin picking and fiddling starts to grate on me after a while, melting into an endless, samey-sounding hoedown. Although fun at first, I can’t do it all night.

So, true to their name, Trampled By Turtles’ swampier stuff stood out to me simply by breaking up the mood. The boggy dirge of “Gasoline” was like a sunset dipped in blood, and the galloping ending of closer “Alone” paid off thanks to the backwoods lullaby at its beginning. I also can’t name a song that isn’t made better by some strategically placed “whoa-oh-oh-oh-oh”s at the climax. It wasn’t quite enough to win me over, but it sure was purdy.

Stray Observations:
* Like many people, I’ve always found Trampled By Turtles’ band name to be strange, and their set got me thinking about it quite a bit. Can you imagine actually being trampled by turtles? For some reason, I keep picturing getting stampeded to death a la The Lion King by a battalion of aldabra giant tortoises, which can actually move quite fast. Frightening stuff.

* Despite some overloud bass mixing during the Turtles’ first song and a few hiccups during The BOTH, overall the sound was surprisingly crisp for an outdoor festival. It never started to drone and distort as it does by the end of Lolla or even Pitchfork. To be fair, it’s a much, much smaller space. But still.

* Props to the sound guy for playing Dire Straits’ Making Movies almost in its entirety in between the first few sets of the day. I get a lot of shit for owning every Dire Straits album, and hearing my favorite one blasted at The Hideout reaffirmed that maybe, just maybe, they’re a cool band. –Dan Caffrey 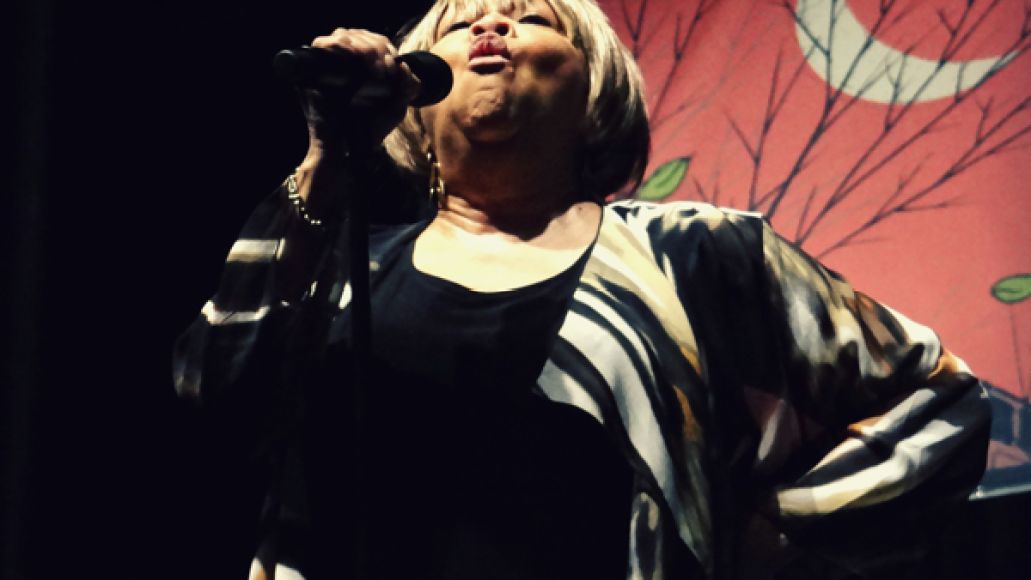 In the minutes before Mavis Staples played at dusk on Friday night, a throne was set up to the left of the stage. If that sounds like an overwrought gesture, it’s not. Not for a longstanding musical and sociopolitical icon like Staples, and certainly not in her hometown of Chicago, where her reputation is downright regal. At 74 years young, the soul legend is still intent on earning her keep.

Although needing to walk with a cane due to a recent knee-replacement surgery, Staples was nevertheless affable, charming, sassy and plenty invigorated. Coloring her lively set both with cuts from her latest release, One True Vine, and covers from The Band (“The Weight”) and Buffalo Springfield (“For What it’s Worth”), the singer captivated the Hideout crowd with a veteran’s touch. Even though she didn’t need to take a seat on the throne, no one would have blamed her if she had.

Stray Observations:
* The name of Mavis’ new knee? “The Hideout.”

* There’s a lovable, cool grandma quality to everything Staples does. Even the imperfections, such as having to briefly stop her set to confer wit her band, were met with warm laughter from the crowd. There’s something comforting in a singer that doesn’t try to hide her age.

* Most tender moment? When she tearfully remembered singing “The Weight” with Levon Helm. – Ryan Bray 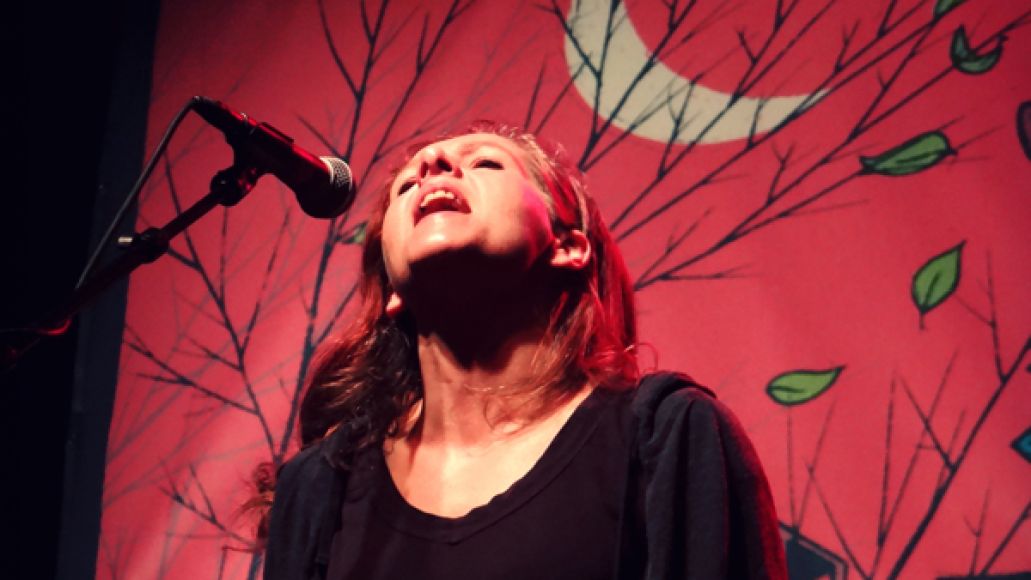 Proving that one good turn deserves another, Neko Case followed up Mavis Staples’ powerhouse performance with a strong showing of her own to close out the first night’s festivities. The set was the singer’s first in support of her solid (and verbosely-worded) new record, The Worse Things Get, The Harder I Fight, The Harder I Fight, The More I Love You. There was some slight anxiety over the monitors, but it seemed to go largely unnoticed by the eager crowd.

Case, backed by a stellar supporting cast that included a quiet Eric Bachmann on guitar and a chipper Kelly Hogan on backup vocals, split the difference between dusty Americana ballads and more spirited indie pop fare. The new record was well represented (“Calling Cards”, “Wild Creatures”, and “Night Still Comes”), but the undisputed highlight came when Case and Hogan went completely a cappella on everyone’s ass with “Nearly Midnight in Honolulu”.

Stray Observations:
* Before she sang a single note, Case dedicated every one of her songs to Mavis Staples. That’s pretty classy.

* Even with the presence of Bachmann on guitar, the number of Archers Of Loaf songs played was a disappointing 0. He and Neko could have at least done “Your Control”—their metallic duet on Crooked Fingers’ 2008 album, Forfeit/Fortune.

* What would a festival be without a little scrappy stage banter? “That breeze feels pretty nice, even if it smells like dumpster juice,” opined Hogan, referring to the garbage trucks next door. Oooooooh. In your eye, Chicago! In. Your. Eye. – Ryan Bray