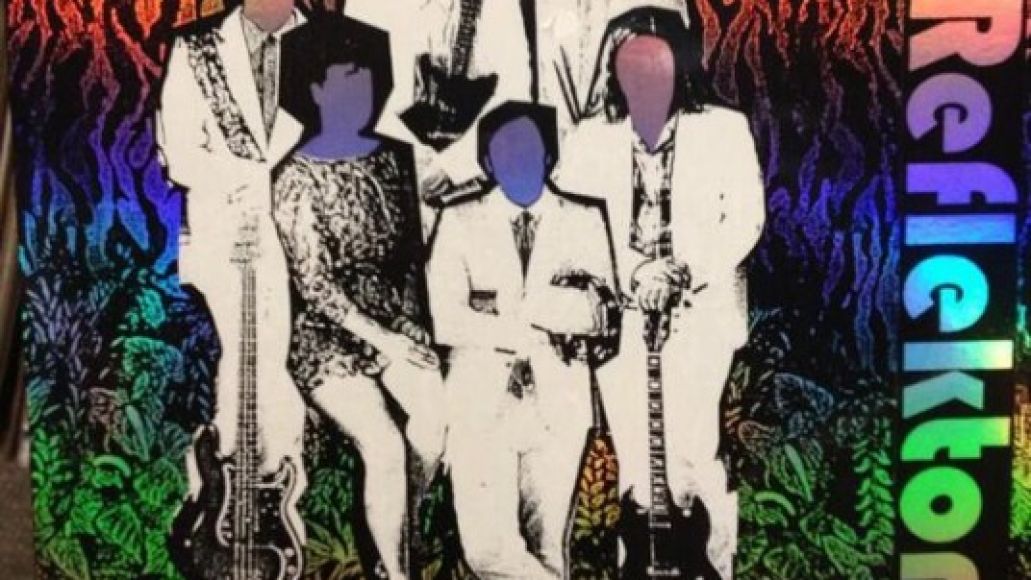 Arcade Fire’s new single “Reflektor” prematurely leaked onto the web Saturday ahead of its Monday night premiere. Though a representative for the band refused to comment on the song’s veracity, a reader who has heard the 12″ vinyl confirmed to Consequence of Sound that it is, in fact, the real McCoy.

Update: You can hear the song within an interactive short film. Also check out the band’s other video for “Reflektor”, directed by Anton Corbijn

As Pitchfork points out, the eight-minute song appears to feature vocals that sound similar to David Bowie, which gives credence to today’s report that the music legend recorded with Arcade Fire and producer James Murphy in New York City. You can certainly hear the influences of Murphy on the disco-inspired track, which comes across as a mix of LCD Soundsystem and The Suburbs track “Sprawl II”. It’s one of Arcade Fire’s most danceable tracks to date, with both Win Butler and Régine Chassagne taking a turn on lead vocals, backed by a funky disco beat that’s fueled with the weight of saxophones and horns.

“Reflektor” is officially set to premiere Monday night at 9 pm, accompanied by a video directed by Anton Corbijn. The song will also be available on 12″ vinyl at select record stores around the country. Meanwhile, Arcade Fire’s new album will be released on October 29th via Merge.

Watch a teaser trailer for “Reflektor” below.