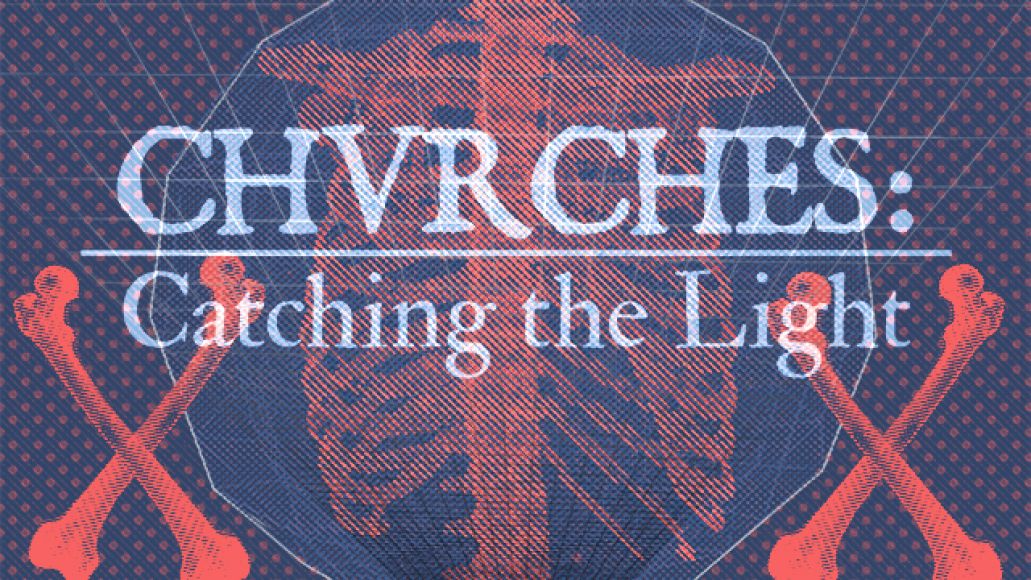 The Metro’s stage is emanating neon, but there’s not a glow stick in the house. No lime green tanks or hot pink sweatbands, either. Most people here are dancing to varying degrees of exertion, but all feet are staying confined to personal spaces, and all eyes are deadlocked on the three musicians in front of them. If anybody here has taken molly, they’re hiding it well, and maybe regretting it. This is electronic dance music, but apparently it’s not EDM.

Glasgow’s CHVRCHES is about to wrap up a two-night stop in Chicago, during which they’ve sold out consecutive weekday shows at two of the city’s premiere big-room venues. The previous night’s show at Lincoln Hall, tacked onto their tour due to high demand, drew a near identical swarm of middle-millennials, those in their teens or 30s representing extreme outliers. How each person discovered the band varies: I hear satellite radio, college radio, NPR, and at least one fan who claims to be from the UK, though I wonder exactly how relevant that is. There is one predictably clear winner, though. Most credit a blog or website.

Now the lead singer, Lauren Mayberry, is engaging one of her two synth-playing bandmates in a semi-coherent rant about Kevin Costner and his 1992 film The Bodyguard. Something about being paranoid that one of the red lights on the many video cameras in front of them, which are webcasting the concert live, is really a laser sight for a gun, like in the film. She also thanks a girl in the crowd for answering their Twitter plea to borrow a Maschine MK1, making the show possible, as their own died only a couple of hours earlier.

Minutes later, the final few chopped snippets of her voice at the end of “The Mother We Share” ring out, and with that, they’re off to Columbus. As usual, there’s no encore since they barely have 50 minutes of total material to perform, which Mayberry made sure to remind everyone in advance. Outside, the venue’s marquee advertises tomorrow’s headliner: Icona Pop, the Swedish duo whose megahit “I Love It” peaked at #7 on the U.S. charts last year, and #1 in the U.K. Tickets are still available, it says.

If you want to understand the science of hype in 2013, then good luck, but you might start by looking towards CHVRCHES. In less than two years together, the electro-pop group has ascended the ladder with curiously unbroken efficiency. In May of last year, they took their first step by anonymously releasing one song, “Lies”, online. Ten months later, they won South by Southwest’s Grulke Prize for Developing Non-U.S. Act – for their first U.S. shows as a band. In June, they performed on Late Night with Jimmy Fallon. Currently, they have three songs charting internationally. Their Top Star-earning debut album, The Bones of What You Believe, is out this week. 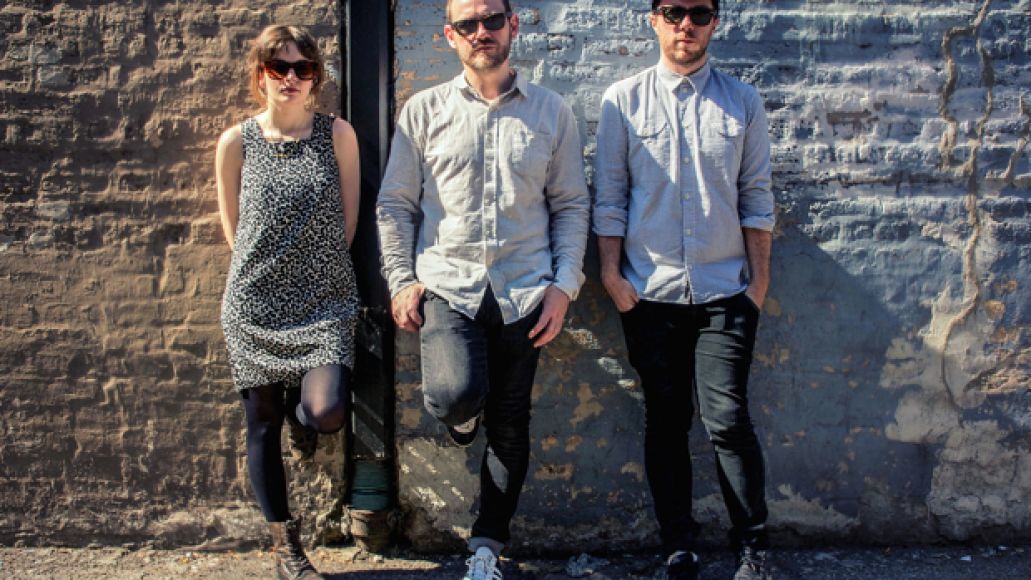 It’s over 90 degrees on an offensively bright Tuesday afternoon in Lincoln Park when Mayberry walks into the tiny upstairs room at Lincoln Hall where I’ve been asked to wait, Walgreens store-brand steam inhaler in tow. “I had to go to three stores just to find one,” she tells me, more triumphant than exasperated. We’re both getting over colds, but neither of us is finicky enough to suggest a bigger room. Her two bandmates, Martin Doherty and Iain Cook, enter right behind her and break the ice with confirmation that it is, indeed, “fuckin’ hot,” the hottest they’ve experienced in a long time.

The band has just arrived in Chicago from Minneapolis. We’re within a couple of hours of soundcheck o’clock already, so we exchange similar pleasantries as they run around for a few more minutes before situating on couches, visibly relieved thanks to multiple fans on full power, and a table of sandwiches and sparkling water in front of them.

Immediately, our brief introductions devolve into free-for-all conversation, and I notice right away that not one of them is afraid to seek out a bigger point, or even a potential debate, from within the most pedestrian observations. When Mayberry and I address growing up in the era of the file-sharing application KaZaa, Doherty sees a chance to chime in about the band’s tolerance of piracy.

“It’s the other side of the coin,” he says. “You can’t be a band that’s come to people’s attention in the way that we have, using social media and the Internet, and then when your record is available to hear, expect the same people that brought you to the table not to listen to it.” 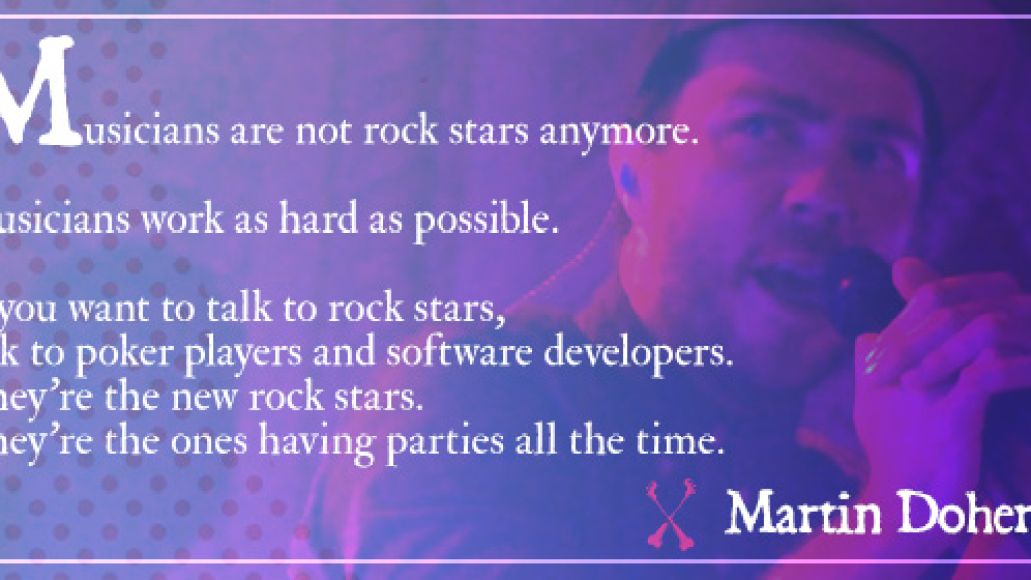 Doherty seems to be the most vocal. Cook is the opposite: He doesn’t interject often, but has the type of whole-beard smile, which he wears more often than not, that could extinguish any tension if ever it did creep into their always diplomatic debates. Mayberry plays the fulcrum. She’s thoughtful with every word, and leans on a high-functioning addiction to punctuating each carefully articulated contribution with an equally casual “so, yeah.”

“She’s more mature than the three of us put together,” Doherty says of Mayberry, and I realize that I’m the third and that he’s already determined how mature I am, but I don’t disagree.

What strikes me the most, though, is just how deep the band’s knowledge of film and television actually runs. Even having come prepared for this, I struggle to keep up with their abundant kneejerk references. For instance, when I tell them I went to college in Indiana, they say they’re familiar with the state, but only from the 1991 Fox series Eerie, Indiana. This reflex even seems to have rubbed off on their tour manager, Cara McDaniel. When I use the phrase “born and raised,” she replies, “like Will Smith,” which takes me a second.

It’s especially apparent after what transpires when Doherty jokingly compares this conversation to an Alcoholics Anonymous meeting. I ask what that would make me, a little less jokingly. “Our sponsor?” he posits, before warning me to start expecting his calls at three in the morning. 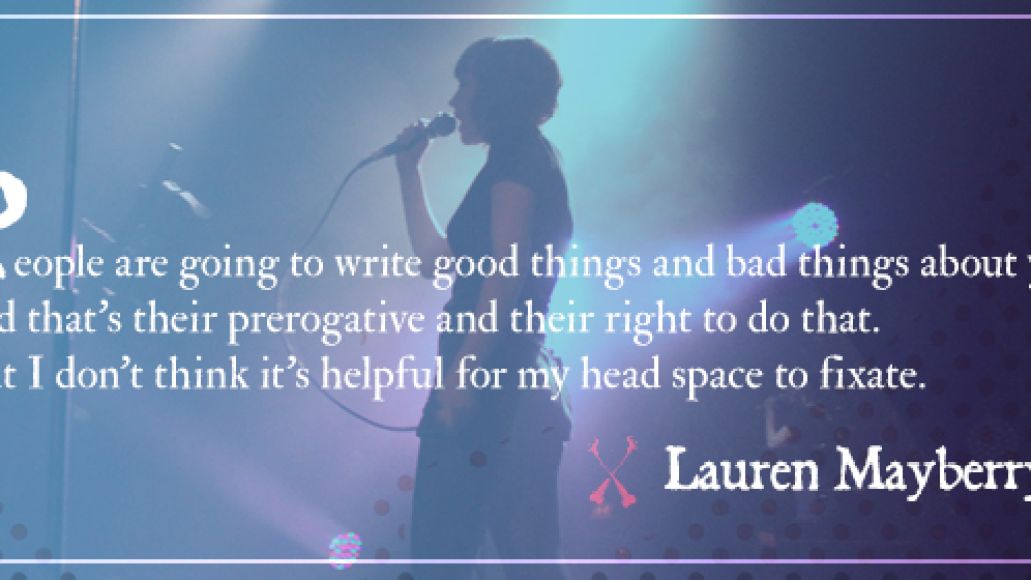 Mayberry says I’d actually be “the one who brings the donuts and asks the questions.” But Cook wins: He says I’m really Phil Towle from the 2004 documentary Some Kind of Monster, in which Metallica hires the renowned psychotherapist to help resolve personal tensions in the band during the creation of their album St. Anger. I’ve never seen it, but now I know that “the DVD extras are actually the best part,” if Cook is to be believed. They all crack up, and I need the whole thing explained to me.

Joke or not, it’s another segue. “I found it really depressing,” Mayberry pivots, suddenly dead serious. “It’s a very good thing to watch on tour. Never has it been so obvious that people really hate each other but don’t know what else to do with their lives other than be in a band.”