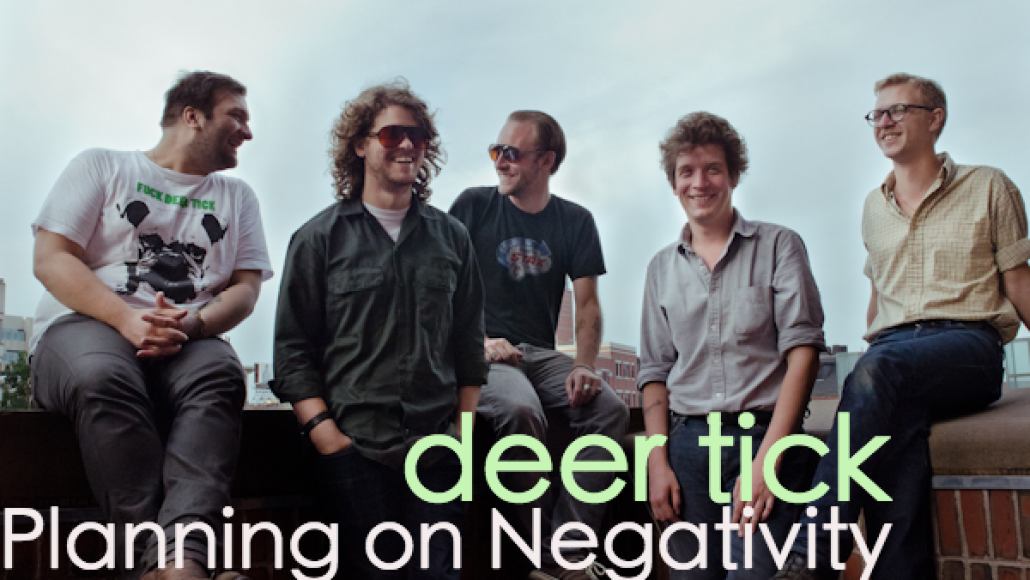 John McCauley likes to talk as if he doesn’t have any grand designs in life. At least that’s how he presented himself when I sat down with him and his band, Deer Tick, at this year’s Newport Folk Festival. The day before our chat, he had delivered a solo performance at the festival’s Quad Stage, during which his mother appeared for a cover of Jimmy Buffet’s “Margaritaville”.

“Oh, I just decided to do that the moment I did it,” he says. “I didn’t plan that out at all. A lot of what happens in Deer Tick and in my life is spontaneous. So I don’t have any big plans.” He pauses for a beat, and as he mentally formulates the next sentence, his face forms a slight, wry smirk. “I just want to be in the biggest band in the world. And as far as I’m concerned, I’m not. So we’ve got a lot of work to do.”

Deer Tick has been putting in work since 2004, when McCauley started the project solo in Rhode Island. Over four albums– including Born on Flag Day and The Black Dirt Sessions, both of which stem from one 20-day marathon studio session in 2008, and last year’s Divine Providence–– the band has combined country, folk, and drunken punk into their own dynamic blend. They’ve gained a reputation as a beer-swigging, raucous party band, the kind that smokes cigars or throws up during interviews.

On September 24th, however, they’ll reveal their more focused side with the self-described “dark” yet “melodic” Negativity. Much of the record was written in 2012 while McCauley’s engagement to Those Darlins’ Nikki Darlin was deteriorating and his father was being sent to prison for tax fraud, so the title and theme are all too apropos. The band premiered Negativity live in full at the final show of their three-night Newport Folk Fest after-party residency at the Newport Blues Cafe. 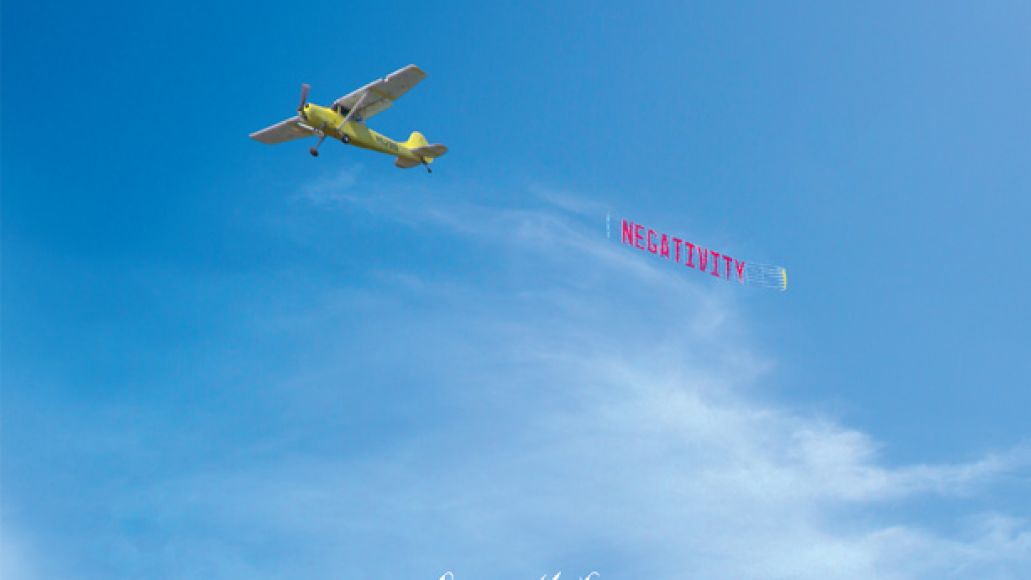 “Well, I think negativity has existed for a long time,” bassist Chris Dale Ryan clarifies with a laugh. “We’re just premiering our take on negativity.”

“I think people will be talking about it, ya know?” McCauley chimes in about the premier. “I think a lot of people might wish they were there. It’s an exclusive kinda thing; it’s only a couple hundred tickets. I don’t know, whatever gets the buzz going. Hopefully somebody gets some good video or audio out of it, and people can get a little taste of what the record’s going to be like.”

And it’s there that McCauley betrays himself. Just a few minutes earlier, he was talking about his lack of planning, but now he acknowledges his understanding of marketing, something that certainly takes strategy.

As any good strategist knows, it’s all about location, location, location. Deer Tick is a big part of the Newport Family, with McCauley himself standing tall as the beloved Captain Tipsy (as Ramblin’ Jack Elliot dubbed him in 2011). So it made good sense to debut Negativity at one of the festival’s rather infamous aftershows. It also made good sense to hold a social media-based contest for passes to the show involving Instagramming a photo of a plane hired to fly over the festival Sunday afternoon trailing a banner that read “Deer Tick – Negativity – 9/24”, mimicking the album’s artwork. The hashtag needed to enter the contest was, of course, #Negativity.

Like the hype-machine setup around the album and after-party, there’s a deeper thought processes behind Negativity’s songs than McCauley might let on. When I ask if the reason the new record is so melodic and dynamic is to make playing such thematically dark songs more emotionally sustainable for himself, he concedes it’s a factor.

“I’m pretty sick of, and I’ve been sick of for while, just seeing bands get up on stage and play sad shit. It’s like, give me a fucking break. I mean, I have a wide range of emotions like everybody else, and yeah, I’m depressed a lot of the time,” he states firmly. “But I don’t wanna be boring. I feel like you just keep stacking ballads and somber jams all next to each other, and I don’t wanna see that. I don’t wanna represent that. I don’t wanna do that to myself or my fans. I feel like maybe in the beginning, the very, very beginning of Deer Tick, before War Elephant, it was kinda all that, and I said I gotta do something a little different. So I’ve been figuring out what I want to do, but I like being in a band like this where we can write about fucked up shit and still be poppy and accessible.”

Helping him and the boys form that sound is Steve Berlin of Los Lobos, who came in as Negativity’s producer.

“He’s really good at squeezing our talent out of us, making us work hard,” guitarist Ian O’Neil explains. When pressed on how Berlin coaxed out their skills, he admits it was subtle. “Sometimes [he just grabbed us and squeezed], if it came to that. I think his age and his stature and his experience, it’s not necessarily intimidating, but once you get comfortable together you can at least respect every idea that he has and take it seriously.”

Of course, that doesn’t mean that every proposal is going to be executed.

“He really wanted us to keep this one version of the song ‘In Our Time’ on the album,” O’Neil continues. “And that was really the only time where we were just like, ‘No. We really don’t like this version. We don’t like how it came out.’ And we sat on it for a night and he was like, ‘I really it,’ and we said we could do better. And we did, and he agreed. So we put him in his place once, but he put me in my place several times.”

Perhaps the reason they stood their ground on “In Our Time” is because it holds special significance to McCauley, even amid songs about his father’s sentencing and the collapse of his engagement. The track may carry that weight because it’s a duet with the individual who very well could be responsible for helping McCauley out of that dark time: his current girlfriend, Vanessa Carlton.

“She’s one of the boys,” McCauley says of having Carlton on the record. “She stayed at our house that we rented in Portland [Oregon] for a few days and just got right into it. When we met, we wanted to work together and stuff. I didn’t know what would happen and how we’d sound together, but I think our voices together sound really good.” Then he quickly mumbles something I can’t understand over the hospitality area’s din. I ask what he said. “And I love her,” he repeats.

He’s less shy when discussing working with Berlin on Negativity after playing with him in one of McCauley’s super-group side-projects, Diamond Rugs.

“Having him as a bandmate is way different,” McCauley says. “He was never playing producer; he’d have some great ideas and he’d kinda drop them in there while we were in the studio. Obviously, the guy’s got a good ear for producing music. But we used Adam Landry and Justin Collins as producers on that. So Steve is obviously comfortable being on both sides of that and that responsibility.”

I ask if Diamond Rugs has any future plans, and McCauley responds with that familiar sense of half-extemporaneous, half-engineered intention.

“We’re making another record. We have plans to make a new record, but who knows.”

When I ask the same thing about his other super-side-project Middle Brother, featuring Delta Spirit’s Matthew Vasquez and Dawes’ Taylor Goldsmith, his response is more practiced, delivered in a serious, lawyerly tone.

“I can’t really comment on that. I’d love to do it, but other than that I have no information.”

Our conversation swings back to that night’s afterparty and the performance of Negativity. The boys seem to come at the show from a logical standpoint, again evincing the fact that the members of Deer Tick aren’t as reckless as their beer-drenched concerts and public personas might lead one to believe.

“Since we do this every year, it’s nice to make sure every show is as special as possible,” O’Neil says. “Ya know, there are certain friends, guests, whatever. Last year we did War Elephant on Sunday night. And then we’re getting ready to release the [new] record, so it makes sense.”

“They will,” Ryan affirms, fully aware that things which make sense don’t always go as planned. “They will.”

Maybe that’s what they really mean when they talk about remaining offhanded in their approach as a band, and what the upbeat melodies imbue into the bummer themes of Negativity: The best laid plans of mice and men get shit on more often than not, so you better be ready for the stink. And when you can, remember to have fun.

“[Saturday] night we played a song off of Negativity that’s sort of a slower ballad song,” McCauley explains. “And there’s a break in it where I do a little piano solo that’s very sparse. And it’s like the band stops, and I’m tickling those… plastics. And all I can hear is the crowd.” He imitates the garbled noises of a disinterested club crowd. “Like, ‘ah, shit, they don’t care about this song, man. It’s not in their brain.’”

“It’s an after-party,” O’Neil responds. “I have to remind myself of that every year. It’s still a party; people go there to have a good time.”