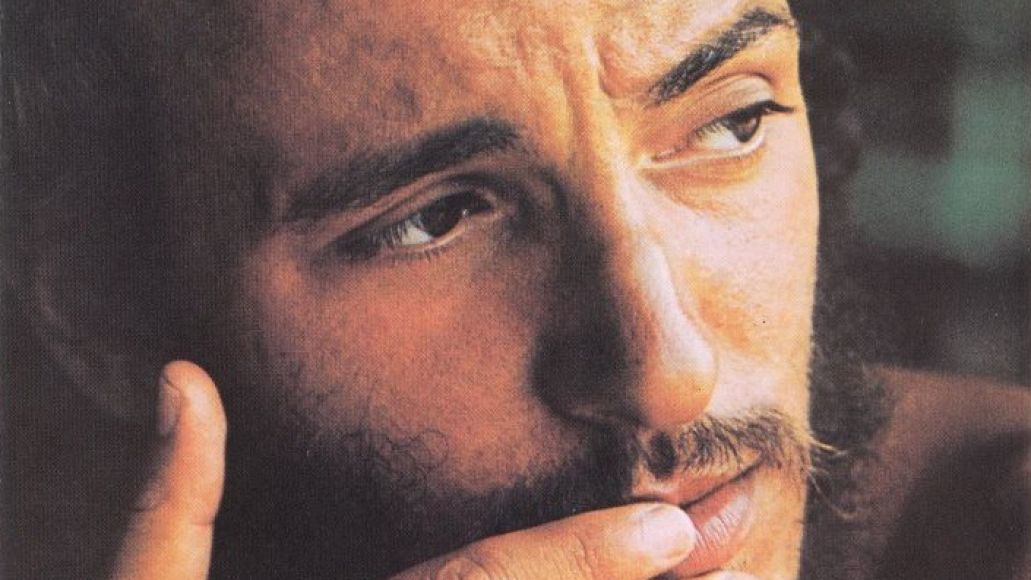 The back cover of Bruce Springsteen’s The Wild, The Innocent and The E Street Shuffle (WIESS) reveals a motley crew. Not a single E Street Band member is standing up straight, two sport provocatively unbuttoned blouses, and their footwear ranges from Cuban heeled boots to scruffy Hi Tops and dusty bare feet. There’s a pair of pasty caucasians, two beefy black guys, a lanky latino, and a scrawny, bronzed, struggling singer-songwriter that couldn’t be called The Boss without a healthy dose of irony.

Not only does this snapshot capture the band at their most rowdy and jocular, it’s also their pinnacle of ethnic and racial diversity.  The impending departures of frenetic drummer Vini “Mad Dog” Lopez and piano man David Sancious rendered the ragamuffin sextet roughly two shades whiter, while the 14-month recording cycle of Born to Run traded youthful recklessness for seasoned precision. WIESS, which turns 40 this week, is the E Street band’s most visceral and eclectic offering, and it’s no coincidence that the LP coincides with the band’s high water marks of spontaneity and heterogeneity. It’s this haphazard blend of Black and White; freewheeling riffs and deft arrangements; naÃ¯veté and weltschmerz; that drives Springsteen’s poignant portrait of escapades beneath the Jersey boardwalk and escapes to parts unknown.

At its core, Springsteen’s sophomore offering is a vibrant tribute to the thrilling possibilities of youth, tempered by sadness that our days of wild innocence are inevitably fleeting and finite. For Bruce, this tension breeds an urgent and desperate need to seek salvation in escape; a motif first explored in “Sandy” and “Rosalita”, and further developed throughout Born to Run. 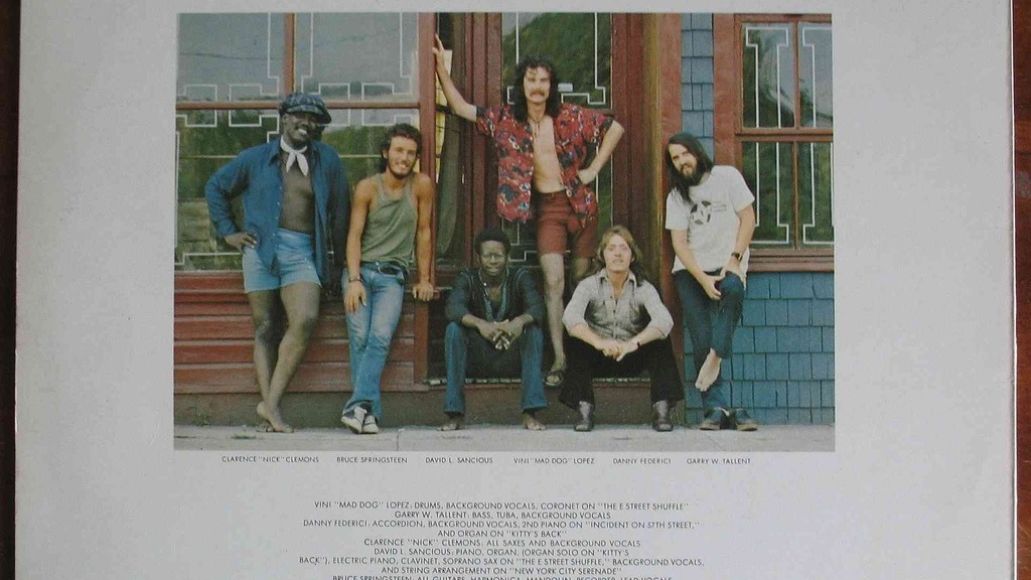 WIESS champions two distinct character types. There’s the passionate, hyperactive, low class delinquents living their Jersey Shore lives to the fullest; and those seeking to avoid a claustrophobic hometown future through exodus and cunning. The former comprises Bruce’s buddies and flames. They’re the colorful, carefree kids that Springsteen loves with all his heart, but ultimately sees as doomed by socioeconomic shackles and the fast approaching burdens of adulthood. Springsteen, though cherishing his last lazy days with these childhood chums, is confronted by sadness and bittersweet nostalgia. He knows the fun can’t last, and, more importantly, that unless he acts fast he’ll end up a shell working double shifts at the Shell off Route 72.

On opening cut “The E Street Shuffle”, Springsteen recalls the jaunty and waggish scenes of his youth. Leading with a jazzy New Orleans coronet and Gary Tallent’s funky bass, Springsteen populates the track with “teenage tramps in skin-tight pants”; boy-prophets walking “handsome and hot”; and “blonde girls pledged sweet 16.” Congregations of miscreants hoot and holler in the background, as the E Street Band rises above the din alongside Bruce’s scorching guitar riffs and Clarence Clemens’ naughty saxophone. After eliciting a boisterous call-and-response from the grandstands (“everybody form a line!/ airy body forma lieee-ahnnn!”), Bruce lets loose a cracking, pitchy yelp, “doin’ that E street shuuuuhfuhhhaallll!” The scene’s bumping, the crowd’s young, and everyone’s all smiles.

But nothing lasts forever. Amorous ballad “4th of July Asbury Park (Sandy)” has Springsteen vying to reconcile the transience of interpersonal connection  (“Love me tonight/ For I may never see you again”), with a yearning for elusive permanence (“Love me tonight/ I swear I will love you fuh-eh-eh-vahhh”). Suki Lahav’s  overdubbed falsetto ushers the track to a haunting climax, as Bruce softly whispers that a new dawn means leaving behind his “little Eden” on the Jersey Shore:  “The aurora is risin’ behind us…This boardwalk life for me is through/ You know you oughta quit this scene too.”

Channeling this theme of ephemeral love, Spanish Johnny learns a painful lesson in  “Incident on 57th Street.” As Johnny patrols the underworld streets with “Porto Rico Jane” on his mind, the “hard girls over on Easy Street” unflinchingly deliver some rotten news. According to these ladies of the night, even love isn’t built to last, “It falls apart so easy/ And you know hearts these days are cheap.”

Transitioning starkly, jubilant “Rosalita” chronicles a forbidden love between the singer and his saucy senorita, Rosie. Here, Bruce finally succeeds in balancing his present infatuation with credible prospects for future happiness. Even though Rosalita’s parents disapprove of the song’s protagonist because he plays in a rock band and hasn’t got a dime to his name, the singer urges Rosie to “cut loose her mama’s reins” and drive off with him into the night. He boldly declares an intention to “liberate” young Rosie to the tune of triumphant horns and Lopez’s piercing drums. The E Street Band’s instrumental barrage drowns out Rosie’s uncertainly and her parents’ cries of protest, enabling the singer and his sweetheart to escape to “a pretty little place in southern California.” The ticket to salvation is of course rock music, as he boasts: “A record company, Rosie, just gave me a big advanccccccce!” For Springsteen, it’s all or nothing.  Play your heart out and escape with love on your arm, or bust .

“Kitty’s Back” shows what happens when escape doesn’t pan out. Atop Danny Federici’s pulsating organ and Clarence Clemens’ lascivious sax, Springsteen sings of an aspirating social climber called Kitty that’s dumped her local boy for a NYC “top cat.” But, rebuffed by the “city dude” that stole her away, Kitty’s forced to slum it back to Jersey. Though her hometown ex has every reason to feel bitter and vindictive, he hasn’t even a tinge of ill-will. The track is all triumph and reconciliation, as Kitty’s ex shamelessly admits he’s powerless to hold a grudge. Fawning over Kitty’s soft skin and sad eyes, the singer playfully groans while warmly receiving her back into his arms: “Oooooooh, what can I do/ Oooooooh, what can I do.” 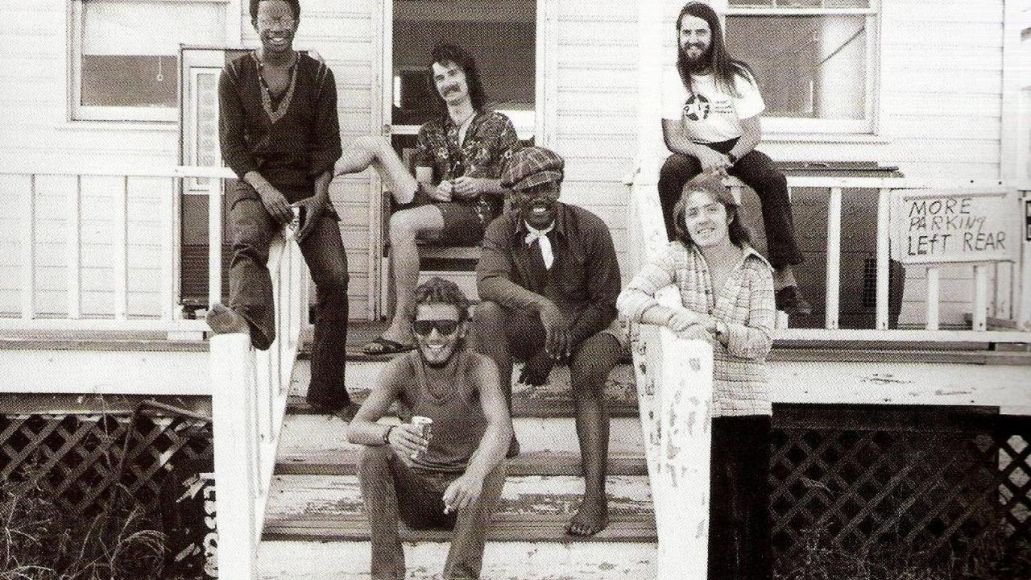 Despite winning critical acclaim, WIESS was a commercial dud. It didn’t yield any singles. It failed to make noise on the charts. And notwithstanding the band’s reputation for impassioned live sets, album sales were sluggish. “We’re at the lowest we’ve ever been right now,” Springsteen lamented after his ’73 tour, “guys are getting thrown out of our houses.” Though this financial miscarriage can partially be attributed to song length – all tracks are over four and a half minutes long, and most clock in at over seven minutes – Springsteen was also swimming against the cultural currents of the 1970’s.

“White music” was becoming softer and paler, with all-caucasian rock outfits like Boston, Journey, and The Eagles achieving massive commercial success. Bruce and his E Street Band, on the other hand, sought to integrate Clemens’ funky saxophone solos, Sancious’ electric piano lines, and the feverish rhythmic punch of Vini Lopez into their eclectic arrangements. The E Street Band’s capacity to marshal and synthesize these diverse components explains why folks still wax poetic about this album four decades after its release, while at the same time hinting at why it flopped in ’73.

Dusting 'Em Off: Bruce Springsteen - The Wild, The Innocent and The E Street Shuffle