In this week’s edition of Dusting ‘Em Off, Senior Staff Writer Len Comaratta and Staff Writer Zach Schonfeld mark the 10th anniversary of Outkast’s landmark 2003 double album, Speakerboxxx/The Love Below, where a match made in heaven (okay, Hotlanta) split neatly apart. The two discuss its sprawling eclecticism, its iconic singles, the frequent Beatles analogies, and the ultimate value of collaboration itself.

Zach Schonfeld (ZS): As a Jewish kid from the suburbs, Speakerboxxx/The Love Below was one of the first hip-hop albums I ever owned. No surprises there — “Hey Ya!” and “The Way You Move” were literally inescapable on the B’nai Mitzvah circuit of the time.

More embarrassing, though, was my tendency at the time — blame it on my staunchly rockist upbringing — to match significant hip-hop albums with their classic rock counterparts. Paul’s Boutique, for instance, always felt like the Sgt. Pepper’s of rap’s adolescence. Illmatic could well be Highway 61 Revisited. Madvillainy is the closest thing hip-hop has to its own Trout Mask Replica, a scattershot avant-garde pastiche.

And Speakerboxxx/The Love Below? That was easy — that’s The White Album.

On a literal level, it’s obvious: here is where atoms split, where one of pop’s most remarkably inventive collaborations drifted into distinct molecules, scurried down their own zigzagging rabbit holes. (Forgive me: my chemistry is no good.) And OutKast went one further by giving its dual visionaries — Big Boi, who just wants to be rap’s golden prince, and Dré, who just wants to be, well, Prince — their own discs. Plenty of critics argued they should have just issued them as their own separate solo efforts. I disagree. Separately, both discs have their flaws — the former felled by some turgid collaborations (“Tomb of the Boom”, “Last Call”), the latter betrayed by its sheer length. But joined together, they are divine — matter and antimatter. Lennon and McCarthy. I’ll let you parse out which is which.

Len Comaratta (LC): Though I love the idea of Madvillain and Beefheart, I think I may have to disagree with the Beatles comparison. I’ve seen references made between the two a couple of times; the first being Dorian Lynskey’s reference in her review of the album comparing Outkast’s effort with The White Album but only in terms of it being “ a career-defining masterpiece of breathtaking ambition.” I think we both can agree with that sentiment.

But when Stephen Erlewine likens the distinct personalities to each half of Speakerboxx/The Love Below to if the Beatles released their epic as a one half being a distinct LP of Lennon songs and one of McCartney songs, I find his “what if” situation a tad misleading. He ends his comparison saying that “the individual records may be more coherent, but the illusion that the group can do anything is tarnished” but fails to understand that that illusion only pertains to the Beatles, not Outkast.

The entire presentation of The White Album is steeped in illusion. The completely blank jacket, calling the album The Beatles (the album’s real title), and purposefully sequencing the album to mix Lennon’s contributions with McCartney’s all was done to maintain the appearance of unity and that everything in the Beatles’ camp was good and happy, though in reality nothing could be further from the truth. At the time of the White Album‘s production, nobody knew of the self-destruction, dissolution, and ever growing chaos that existed behind the scenes. There was no mention of Lennon or Harrison quitting the band on a few occasions before McCartney’s eventual public defection. No one talked of George Martin’s waning influence or how the group lost multiple engineers throughout the album’s genesis. Every effort was taken to maintain the illusion of the Beatles’ infallibility.

Not so with Outkast. Firstly, outside the division of labor on this effort, there was no real tension between the two – in fact, each have multiple contributions on the others’ disc. In spite of every effort of the media to find out if the two were or were not breaking up or if the Outkast banner was used simply as a way of fulfilling a contract, there was never any real sense of animosity. The two go out of their way to to emphasize that there is no beef, parodying in the video for André’s “Roses” or more directly in the lyric’s to Big Boi’s first single, “The Way You Move”, when he says rather matter of factly, “nip it in the bud/ We never relaxin’/ OutKast is everlastin’/ Not clashin’, not at all but see my nigga went to do a little acting.”

I think Big Boi’s line, more than anything, explains best why the difference of the two albums, why the need to express themselves as individuals while at the same time toying with the idea of what Outkast is. Certainly there is truth to Big Boi mentioning his partner’s acting because at the time of this album’s creation, André had begun exploring acting. But if you think about it, André has always been playing a character. Over the course of Outkast’s existence, André has been Dre, André 3000, André 1936, then André and even billed as Johnny Vulture on an Idlewild track, while Big Boi has always been Big Boi. This is somewhat reflective on the two albums, one a solid hip-hop album by somebody who is solidly hip-hop (and always has been) while the other morphs in and out of various styles and methods, multiple personalities, and influences all while hovering under the label “eccentric.”

Though I love Speakerboxx/The Love Below and agree with Dynskey in that it is something of a landmark album for the group, if I may extend the Beatles metaphor, I’ve always been a Revolver guy, so it’s no wonder I prefer Stankonia. 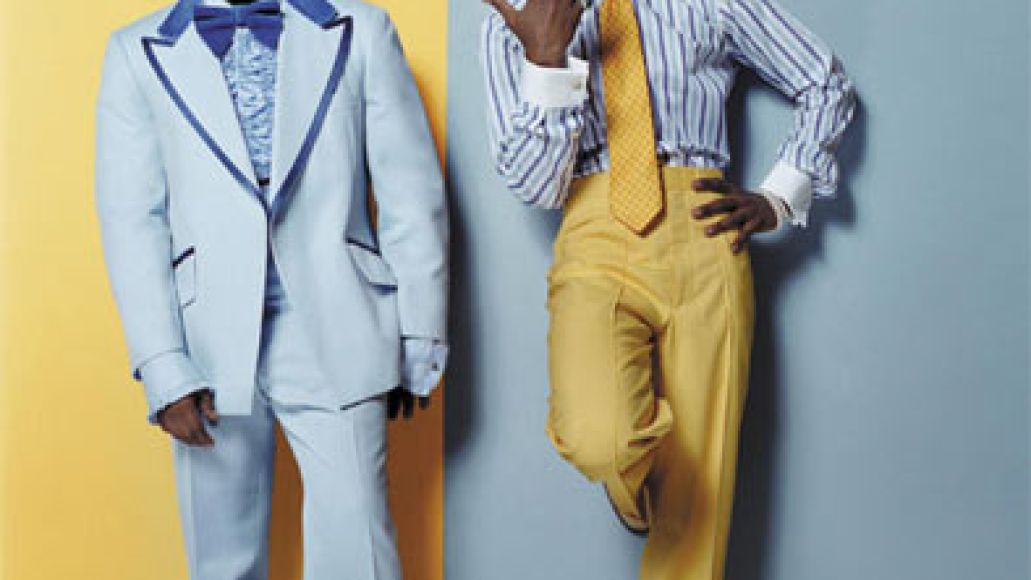 ZS: Touché, Len. You’re right that there wasn’t such personal animosity between Big Boi and André (or so we’re told — I wasn’t privy for these sessions, much as I’d like to say otherwise). But what matters more, I think, is that this double-disc set (you have the CDs, right? With the sweet album art?) captures a creative divorcing: it’s 39 tracks just to announce that barring a few odd examples (“Roses”, most notably), Big Boi and Dré were no longer interested in sharing track space. Much of the conflict surrounding The White Album reportedly arose out of track list-related disputes (George Martin famously urged the Fab Four to cut it down to a single LP, but egos got in the way). Seems like it’s easy to avoid such scuffles when you’ve allotted a full compact disc-per-person. (Of course, you could point to the Idlewild soundtrack as evidence the duo tried to reconcile creatively, but I think you’ll agree that effort wasn’t entirely successful.)

I’m reminded of a point Pitchfork‘s Julianne Shepherd made in 2005, calling Stankonia one of the top albums of the first half of the decade:

Aquemini was OutKast’s pressing together and Speakerboxx/The Love Below was their peeling apart; Stankonia was one last missive of unity before their values divided.

Speakerboxxx/TLB’s brilliance, I’ve always thought, is that it dares to question the value of collaboration. It dares to question whether working together is really better — or inherently better — than working apart. And I think critics are too scornful in labeling Speakerboxxx “just” a hip-hop record. Between “Church”, “Bowtie”, and “Ghetto Musick”, it contains some of the funkiest and most progressive-minded hip-hop of Big Boi’s career, and, given “Unhappy” and “Reset”, some of the most soulful. I prefer it over Sir Lucious Leftfoot, which was perhaps more critically embraced.

LC: I like your phrasing “creative divorcing.” You could probably add amicable to that as well. In Outkast’s situation, I don’t think it was ego driving the separation but rather the two had grown apart, with André pursuing other artistic avenues and Big Boi maintaining course. That said, I do think that the two left the door open for a future partnership, though if you were to ask either of them about it, they’d probably evade the question.

I agree with you that the two probably had moved past working together. You point to the follow-up Idlewild, as a possible reconciliation album (or at least one to give the illusion of such), but even that album, with its 25 tracks only features four tracks with both listed together as writers, one of which ironically was entitled “Hollywood Divorce”. Even in the film itself the two hardly share screentime together, only appearing a few times in the same scene. Idlewild, though it has some good numbers and even features Janelle Monáe while still Big Boi’s understudy, can sometimes feel like the two are expressing a collective exhaustion and that, yes, with this the two are formally over as Outkast.

You bring up the idea that the two dare to question the value of collaboration. I believe that goes hand-in-hand with my comment about the two playing with the idea of what Outkast is (or was, as the case stands now). The idea of the Beatles was that that group could do no wrong, that everything they did was pure, with purpose and intent. But what was Outkast? I never sensed that they thought their “shit don’t stink”, to quote “Roses”, but at the same time, by the time of S/TLB and certainly after the explosive success of Stankonia, it wouldn’t surprise me if they started believing their own press and when that happens, well, that’s when the individual desire can outweigh the group’s. That said, André has contributed to Big Boi’s solo albums hasn’t he?

When the double-album first came out (and yes, I do own it), I couldn’t get past the singles, especially “Hey Ya” and “The Way You Move”, but especially “Hey Ya”. And that was unfortunate. It wasn’t until years after that I truly ‘heard’ Speakerboxx and when I did, I ended up liking it far more than the eccentric avant soul trip of The Love Below. I agree that to call one strictly a hip-hop album is a tad unfair and constricting, but as far as an expression of intent by a man who is hip-hop in many respects, it can’t be denied.

Overall, S/TLB probably should have been the last album by the duo, rather than the good, but not great, Idlewild. Nothing will ever top Stankonia in my mind, but then again, that was a “true” Outkast album (the last Outkast album as it were) and S/TLB, while Outkast in name, seems better poised as a jumping off point for the two individuals to pursue their own ideas and dreams.