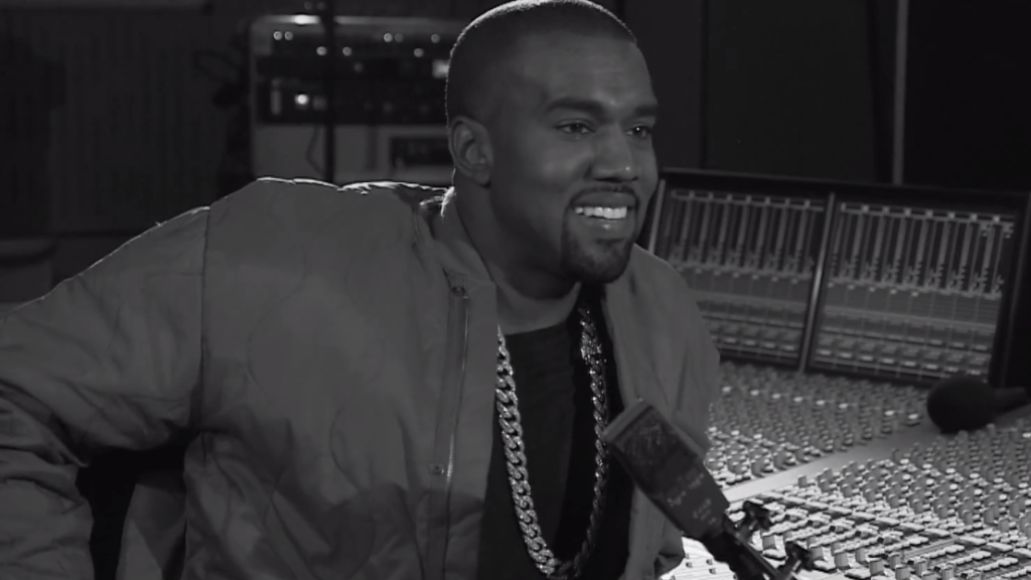 As previously reported, Kanye West has given a rare interview to Zane Lowe, which aired in full on BBC Radio 1 this evening. It covered a number of topics, including his ambitions as both a musician and fashion designer, his new album Yeezus, his haters, and so much more. By our count, Kanye spoke for 58:22 seconds of the 60-minute interview. We’re out of breath from just listening to it.

Watch the interview in its entirety below, or listen to the full audio recording at BBC Radio 1’s website.

Among the many, many notable soundbites:

— He made “exactly what was going on in my mind. I’m a production person… For me, as Kanye West, I got to fuck shit up.”

— “Blood on the Leaves” was supposed to be first [on the album], and I know that would have psychology changed the album… But I wanted to take a more aggressive approach.”

— There may no “Get Lucky” on Yeezus, but Kanye thinks it contains radio hits, “but they’re distracted by statements.”

— “I’m gonna try to make music three dimensional, that pops up and hits you. I’m not here to make easy listening.”

— “I would not be Kanye West if it wasn’t for for Michael Jackson. I was with Quincy Jones the other day, and he said it wasn’t just Mike, it was all these guys breaking down barriers. Michael Jackson couldn’t get his video played. I mean, this is Michael Jackson; he’s not even black, he’s Michael Jackson. He’s so crazy, how can he even be classified as this black artist? For me, in my life and my creativity, it’s been challenging and everything. I was able to ascend to massive heights and never stopped because the foundations my mother and father and grandfather laid through civil rights and what Michael Jackson did with music videos and ground he broke. There would be no Kanye West without Michael Jackson.”

— “I’ve reached a time in my life when my Truman Show boat has hit the painting. I got to a point Michael Jackson did not break down. I have reached the glass ceiling.”

— “I’m a product person, and not just music. I wanna do architecture and clothing and water bottle design. And I’ve been doing this for 10 years and I look around and notice there’s no one like me. And if there is, then they’re quiet as fuck. So that means, we’re seriously in a civil rights movement. Remember my South Park photo, and how funny that was? Do you think there would be a Givenchy in the hood if it wasn’t for that photo. No one thinks about the names I got called for wearing tight jeans.”

— “I want to be the anchor of the first trillion dollar company.”

— “People think my motivation is very megalomaniac and self-motivated. To the contrary, I just want to help.”

— “I shouldn’t be limited to only one place of creativity. You guys don’t understand I did the Air Yeezys and they eBay’ed for $90,000, but the next day I didn’t got a call from Nike… As a creator, for you to have done something the level of the Yeezys and not be able to create again, and you can’t create that on your own, so when I say, ‘clean water was served to only the fairer skin,’ t-shirts are the most we can make. But if it’s anything else, your Truman Show boat is hitting the wall.”

— Comparing himself to Lady Gaga, who was named creative director of Polaroid: “What the fuck does Gaga know about cameras? All the musicians try to get more money to promote products.”

— They ask him, “why is he still trying?” “I brought 10 years of product that’s added to humanity. Where’s the culture at? Rap is the new rock and roll, we bring culture, we the real rock stars. And I’m the biggest of all of them.”

— “They gonna say, ‘why don’t they focus on his music.’ But they’re gonna play this interview in five years and say ‘he called that, he called that.'”

— “I was telling Frank Ocean about this. My mom got arrested for sit-ins and we’re kinda of the sit-offs. Like, ‘Hey, radio, come to us.’ We need to find something new because it’s being controlled in a way where really awesome artists can’t break past something that’s formulaic.”

— “I have no interest in making music by myself. I want to utilize best resources we have and have a conversation.”

— “The things in music selling the most are the least genius.”

— “I’m looking forward to talking to [Kendrick Lamar] as much as possible. He’s one of the future messengers.”

— “Mercy” isn’t going to stand the test of time, because it was made for the radio. “It’s not gonna stand out like 808s or Yeezus stands out. [Those albums] will push or redefine things. And people may say, ‘I love that’ or ‘I hate that,’ but it will change the way they think.”

— “[My Beautiful Dark Twisted Fantasy] can be considered perfect, but that’s not what I’m here to do. I’m here to crack the pavement.”

— “Jay Z is more realized than me. More of his dreams and aspirations have come true. Hopefully I’ll be in a more zenned out eventually. I couldn’t have made Yeezus without Rick Rubin.”

— “You drive in a Maybach past a homeless person and you ask, who’s more free?”

— “We’re all gonna die one day. Live like you’re going to die tomorrow.”