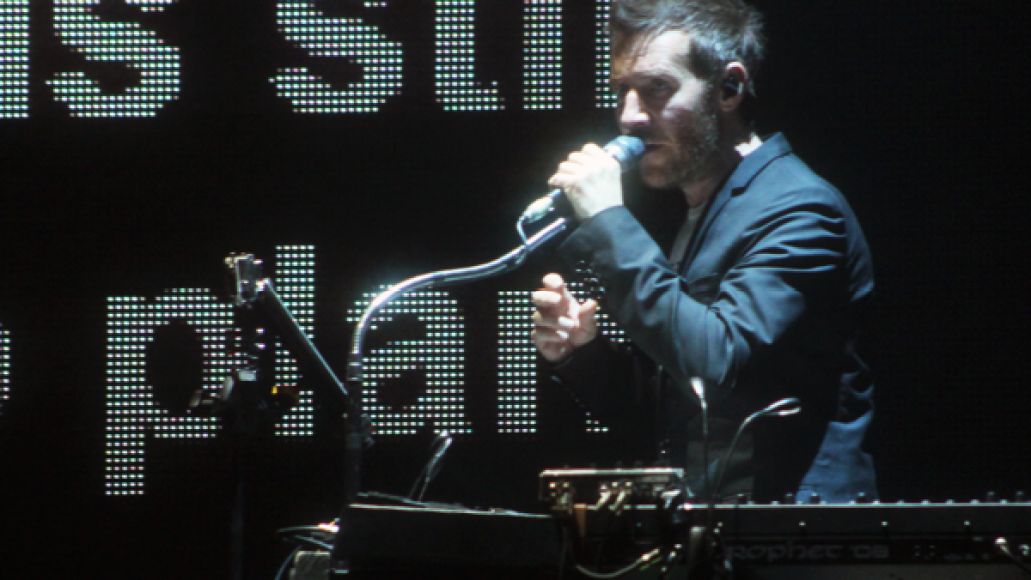 Immersive doesn’t really begin to describe “Massive Attack V Adam Curtis”, the multimedia onslaught currently being staged at New York City’s gargantuan, airplane-hangar-like Park Avenue Armory. At last night’s sold out opening performance, the imposing space was tricked out with 11 two-story screens, arranged in a sort of quarter-oval that nearly surrounded the audience. Upon these screens danced a whirlwind of imagery and ideas, too much for the casual viewer to digest in one sitting, even if that were all that was going on. Which, of course, it wasn’t: there was also a Massive Attack performance taking place in the midst of this — quite literally: the four-piece band, led by Robert “3D” Del Naja (created as co-creator along with Mr. Curtis), played from behind the center three translucent screens.

This was not, however, a typical Massive Attack gig, and anyone expecting their chilled out marriage of hip-hop and bass music was in for a big surprise. Apart from “Karmacoma”, for which MA co-founder Grant “Daddy G” Marshall emerged to provide the vocals, we really didn’t hear any of the band’s original music. Instead, with vocal assists from longtime collaborator Horace Andy and a rather quiet Elizabeth Fraser (Cocteau Twins, “Teardrop”), they played a wide range of covers that tied in to varying degrees with the agitprop documentary taking place onscreen. Some, like The Jesus and Mary Chain’s “Just Like Honey” and Bauhaus’ “Bela Lugosi’s Dead”, seemed chosen more for mood, while others, like the Russian protest songs of Yegor Letov and Yanka Dyagileva and the American standard “In The Pines”, factored directly into the film’s narrative. 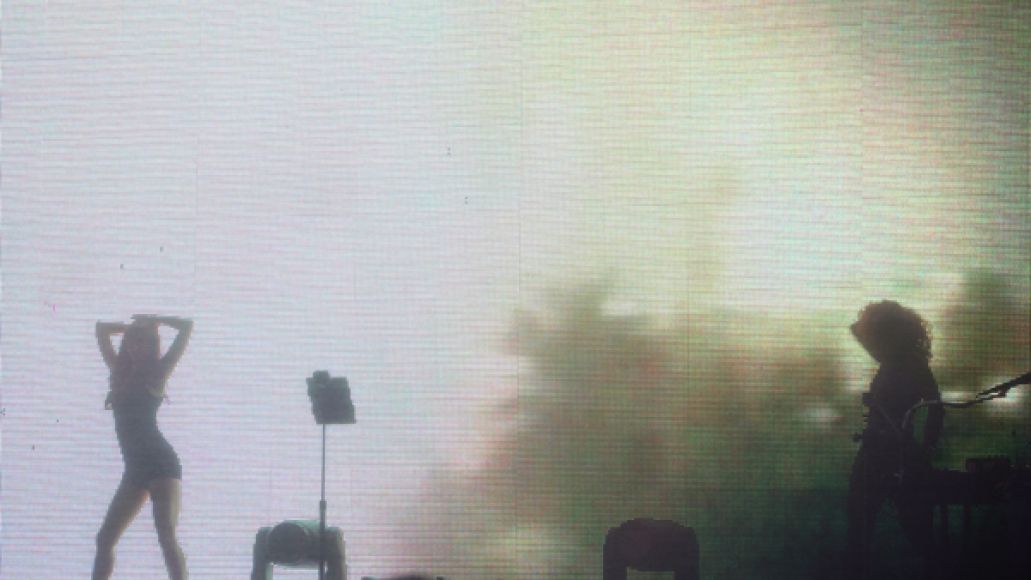 That narrative dealt with the argument that since the end of World War II, society’s leaders no longer seek to create a “better” world, but, rather, a risk-averse, “managed” world ruled by predictive data. The crisscrossing path to this conclusion weaves past some familiar signposts — Chernobyl, the recent war in Afghanistan, and the financial crisis — while invoking quite a few atypical ones: tragic British pop artist Pauline Boty, the executed Romanian communist leader Nicolae Ceauçescu and his wife, media mogul Ted Turner, paranoid genius gambler Jess Marcum, the cunning Russian politico Vladislav Surkov, the economist Fischer Black, and Donald Trump. Even Jane Fonda figures in the mix, as Turner’s wife and an icon to a generation taught to be obsessed with the self.

As with any political art that implicates its audience, there was a degree of cognitive dissonance involved. It’s not difficult to imagine most of this audience going, “Yes! They’re right, people are predictable and impressionable. But not me!” There was also a certain irony in a piece that at one point decried modern society’s preoccupation with images being, of course, full of them. Yet it’s likely the aim of Curtis and Del Naja here isn’t to convert people to a new way of thinking so much as sow the seeds for such a change, perhaps by sending us all scurrying off to Wikipedia immediately afterward to make our own connections. 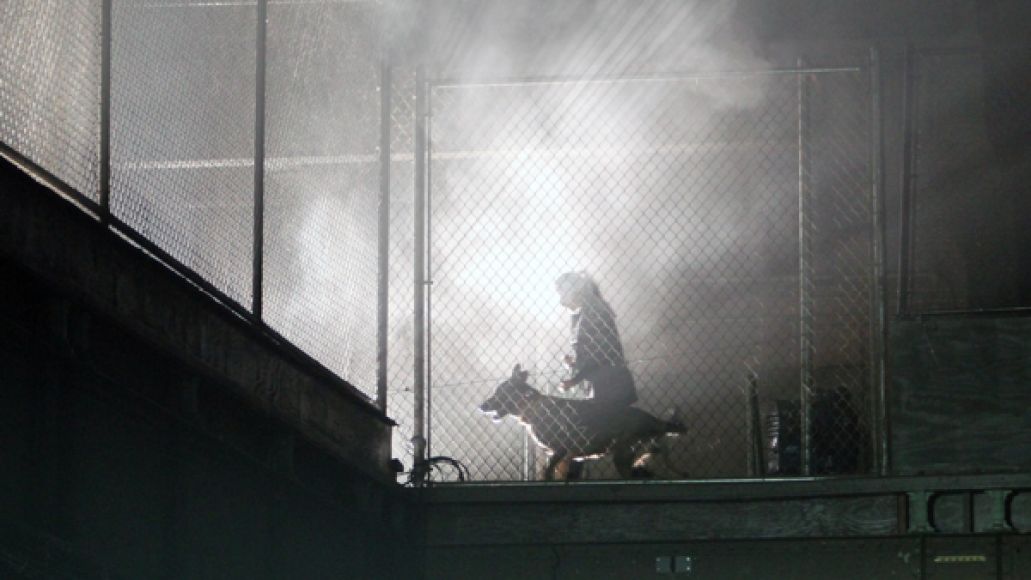 “Massive Attack V Adam Curtis” layers on the provocations — at one point even employing a rain of confetti and two live, barking German Shepherds — but one of the evening’s most striking impressions was also one of the most subtle. With backlighting projecting silhouettes of the band and their gear onto the main three screens, one element stood out: the unmistakable outline of an assault rifle, perched casually alongside an acoustic guitar. The film made no overt reference to it, but there it was, haunting the proceedings every time the lights picked up. We might read the image a number of ways — music as a weapon, the alarming ordinariness of firearms, the suggestion of a police state — but the relative ambiguity of it made it that much more potent than many of the piece’s more didactically argued points. Turns out an understated attack can be just as effective as a “massive” one.