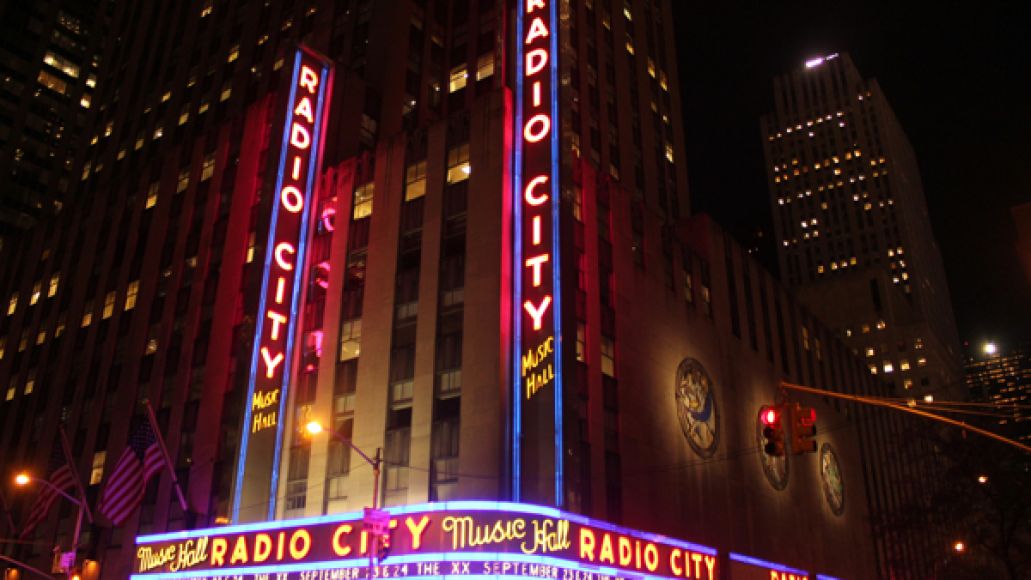 It may sound a little ridiculous now — and they’re still a few masterpieces away from it — but there may come a time when we look back upon The xx as the defining band of our times, in the same way Radiohead could well be considered the defining millennial band, and Nirvana the defining act of the decade before that. I’m probably overreaching here, but hear me out: The 2010s have seen a shift away from ornamentation, excess, and posturing, and toward economy, precision, and emotional directness. These tendencies crop up in everything from design (consider iOS 7, or the Helvetica font’s ubiquity) to economists’ talk of austerity to the preponderance of tweets and Vines and “listicles.” At its worse it’s an alarmingly regressive trend, sure, but at its best — and here’s where I’d position The xx — it feels smart, sleek, and wholly modern.

The xx excel at these tendencies: They’ve cultivated a distinct brand (right down to the logo, one of the most recognized in indie) and an even more distinct sound that draws on a panoply of influences — much as the Tumblr youth of today gorge on a buffet of far-flung content. Yet they’ve refined everything into an airtight package. And none of this has come at the expense of emotional heft. They’re transparent as can be — they share handwritten notes to fans on social media — yet still retain a mystique. All told, it’s quite a balancing act, and undeniably zeitgeist-y. 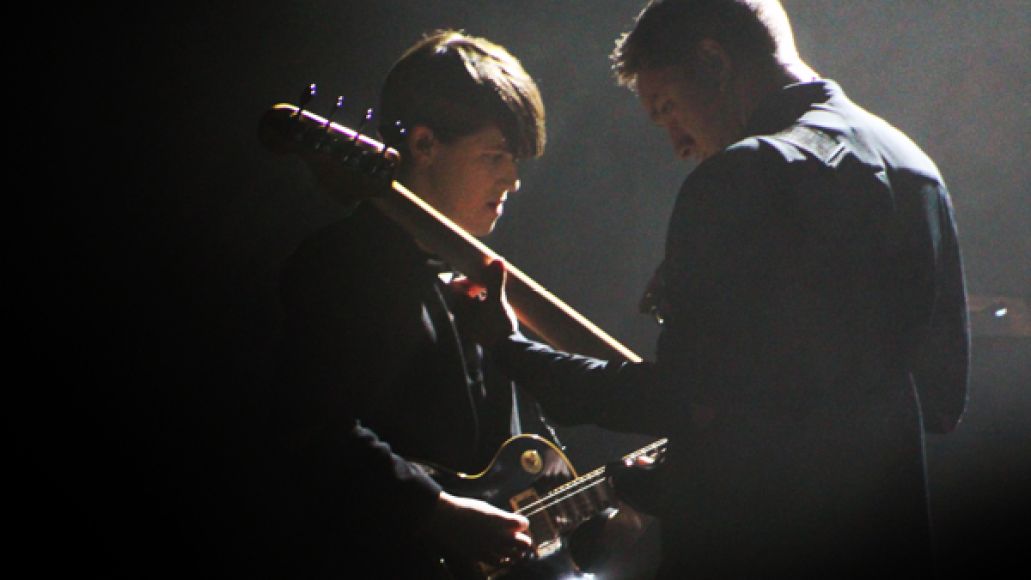 And it may help explain their massive popularity: last night’s show at Radio City Music Hall, “the largest indoor theatre in the world,” was sold out. Between songs, bassist/vocalist Oliver Sims spoke of how much the band had been anticipating this gig and called it a “surreal moment.” His cohort, guitarist, and duet partner Romy Madley Croft later echoed this sentiment, almost teary-eyed. You could practically see the hearts bleeding.

Sincerity may be the trio’s strongest suit, but craft is strong second, and their mastery of it was on full display last night. There are the songs themselves, of course, pitch-perfect studies in miniature that only seldom err on the side of simplicity (“VCR”, “Try”). But it was the presentation that made the night magic. Much like one of the band’s compositions, the evening began simple and unadorned, with minimal lighting, before gradually building to a multimedia crescendo of light and sound with the end of “Infinity”. Along the way we were treated to faithful renditions of some favorites (“Night Time”, “Shelter”, and “Islands”), and variations on others: the band toyed with the crowd by inserting extra-long rests into “Crystalised”, while “Chained” was largely dissected and laid bare for the gathered — kind of a shame, since no xx track better distills their strengths. 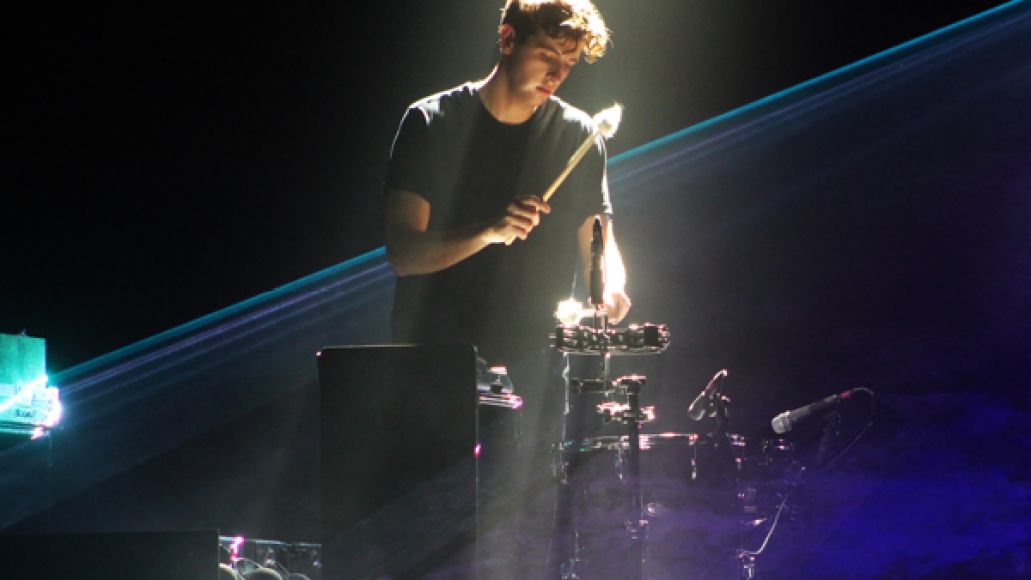 Tellingly, the weak third act of Coexist went unrepresented, while just about everything from xx made it onto the setlist (the one notable exception was “Basic Space”). “Heart Skipped A Beat” brought the sedentary crowd mostly to its feet, where they’d remain until things cooled down briefly for “Reunion”. The majority of the room remained standing after that. Special mention must be made of Jamie xx, whose production prowess cannot be understated, and who gussied up a number of songs last night with touches of dub and techno, helping them fully inhabit Radio City’s surprisingly intimate Art Deco interior. Indeed, the space — built sleek, streamlined, and minimal at a time when ostentatiousness ruled the day — couldn’t have been more appropriate for The xx.

First up was Poliça, who were in something of a difficult position here.  Opening a large-scale gig like this is no picnic for anybody, but the Minneapolis outfit have been touring more or less non-stop since the beginning of 2012, and they have a new record out next month. Accordingly we can’t blame them for playing almost entirely untested material (“Lay Your Cards Out” was the sole offering from 2011’s Give You The Ghost LP), even if Ghost standouts like “Amongster”, “Wandering Star”, and “Leading To Death” would have gone over much better with a crowd one assumes was largely unfamiliar with the band’s music. 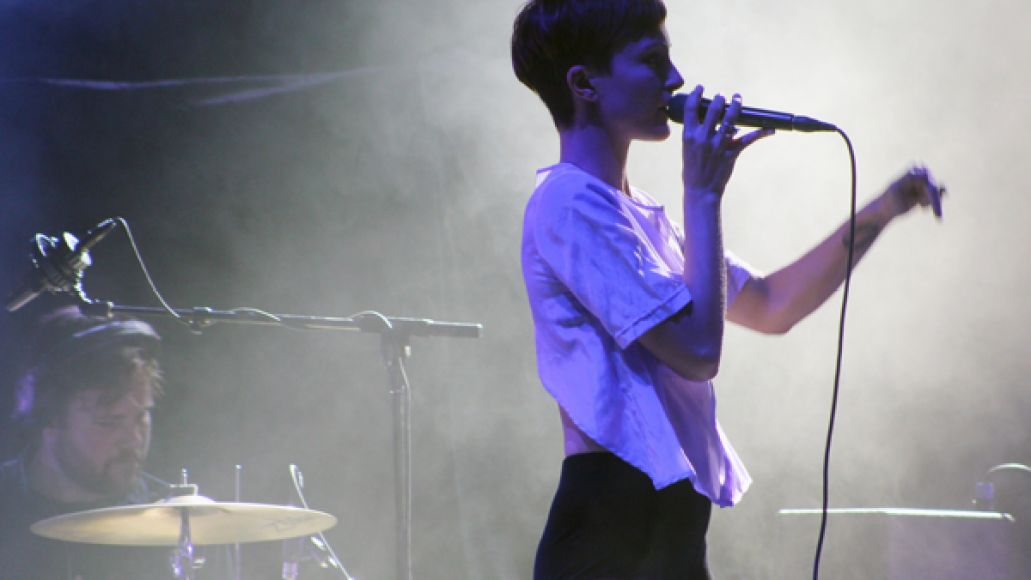 Recent single “Tiff” sounded excellent, of course, and another new song (on which singer Channy Leaneagh appeared to be repeating “flesh and bone,” though it can be hard to tell with the vocal effects) boded especially well for the new LP. But other selections, like the new record’s limp closing track, “So Leave”, fell flat in the 6,000-capacity space, made evident by the uptick in audience chatter. Blame it on the truncated set time, I guess, but Poliça would do well to shift the old song/new song ratio closer to 1:1 in support band situations like these. But that’s not to discount the group’s strengths: this was a well-matched bill, and like The xx, Poliça are another act that feels entirely of the times.