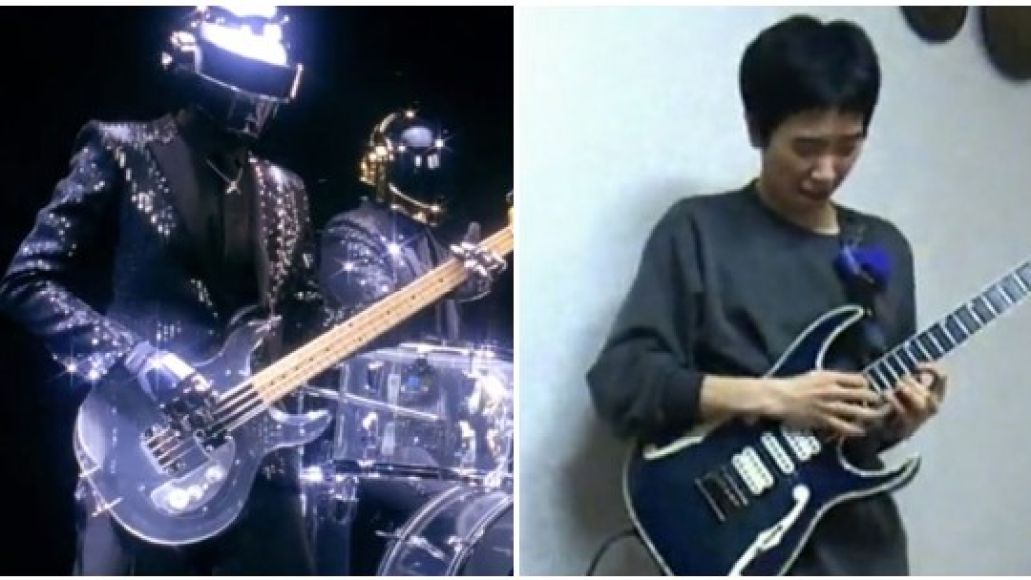 Back in the early summer, when Daft Punk’s Random Access Memories dropped, I found myself reveling in the album’s warm, neo-disco sheen. Yet when I heard a three-and-a-half minute version of “Get Lucky” at my local grocery store, I realized what was about to happen: “Get Lucky” became the anthem of summer 2013. Thus the inevitable backlash: sometimes it can be a bitch to reconcile personal aesthetics with elitist cultural posturing. Enter the naysayers, deniers, and mudslingers, and with them, an accusation of plagiarism.

Spurred on by the overblown Robin Thicke/Marvin Gaye fiasco, the Internet managed to find Zack Kim, a Korean teenager who performed an original composition for solo guitar, “Robot Dance”, that bears an uncanny similarity to “Get Lucky”. Haters gotta hate, and so the story goes: Daft Punk’s biggest hit was stolen from an amateur musician who wrote the song two years ago.

Let’s suspend for a moment the absurdity of the claim, which would mean that two of the biggest producers in the world were trolling the Internet, found a YouTube video by a kid who recorded himself playing guitar (of which there are likely millions of examples), and liked it so much that they decided, “Yes, this song is so crucial to our musical ethos that we MUST steal it from him.” Let’s also ignore the obvious differences in instrumentation, production quality, and vocals (or lack thereof). How similar are these two compositions?

Many of Kim’s choices are likely motivated by his performative constraints. He chooses a simple but interesting four-chord progression, and imitates a simple bass and snare backbeat because he’s looping on a guitar. And he chooses a relatively moderate tempo, about 110 beats per minute, which offers him a variety of soloing options. Daft Punk makes the same choices because of genre considerations. EDM almost always uses a simple, repeating chord progression, and the tempo, just a nudge faster than Kim at 116 bpm, fits the album’s retro-’70s, disco aesthetic.

The songs have the same chord progression, which itself means nothing. With an endlessly repeating four-chord progression, most pop music composers will stick to the basic set of major and minor chords that fit into a particular key. There’s no room for key changes or many of the other chord types that are often found in a more harmonically complex pop song. Both songs follow this model, using only four chords in the key of A major: B minor, D major, F-sharp minor, and E major.

Interestingly, this progression never uses the chord A major, despite being “in this key.” Music theorist Mark Spicer refers to this as an “absent tonic,” meaning that the main chord of the home key never actually appears. In fact, the songs continually subvert the expected A major resolution. This effect helps to propel the progression forward as it never feels “complete,” it never reaches the goal of A major. No surprise, then, that both composers find this progression attractive.

Beyond tempo and harmony, the songs diverge completely. Kim opens by looping a syncopated figure, adding percussion, and then layers colorful extended chords. Although Daft Punk also adds extended chords to their densely layered background, it’s because that’s a choice that good musicians make. When you only have four chords endlessly repeating for five minutes, you need to do something to create variety.

Just for argument’s sake, let’s pretend for a minute that Daft Punk did in fact rip off the basic harmony and rhythm of Kim’s “Robot Dance”. There’s a simple musical reason Daft Punk had one of the biggest hits of their career, and the biggest song of the summer, and Zack Kim didn’t: melody. Our culture places an incredibly high value on a good melody – after all, it’s what we can reproduce with our own voices. It’s what carries the lyrics, the most basic workhorses of musical meaning.

Kim finishes building his loop and starts adding in melody around 1:18, beginning as a gorgeous, well-conceived bit of funky rock soloing before leading to an absolute shredfest around 3:55. Meanwhile, the melodies on “Get Lucky” are simple, stick-in-your head earworms that define the song. Without them, the tune is nothing more than, well, what Zack Kim made: a groovy beat with four chords. The verse has choppy, half-spoken lyrics, leading into those glorious sustained vocal notes on the bridge (“We’ve come too far…”), ascending “to the stars” with some nice word painting. And then there’s the easy-to-sing celebration of hedonistic good times of the chorus, and the vocodor-laden outro where the voices become another delicious layer in the instrumental gumbo. Ultimately, when you think of “Get Lucky”, you think of these melodies.

In our fragmented, post-modern world, perhaps Daft Punk is just a pastiche of some Korean teenager’s home video. That reductive logic ignores how many great pieces of music of the last 500 years use the same chord progression: ’50s pop loved the “doo-wop” progression; every bluesman used the same 12-bar harmonic pattern; any worthwhile jazzman riffed on Gershwin’s “I Got Rhythm” changes. There’s an entire branch of musical analysis which attempts to show that on a background level, almost everything between 1700 and 1900 is an elaboration of the same chord progression, and there are entire genres of Baroque music like the passacaglia and chaconne which all use pretty much the same chords.

So go ahead, make your Internet conspiracy theories. Personally, I’ll just keep enjoying the freshness and originality of this Daft Punk album.

No, Daft Punk did not rip off Zack Kim, and here's why