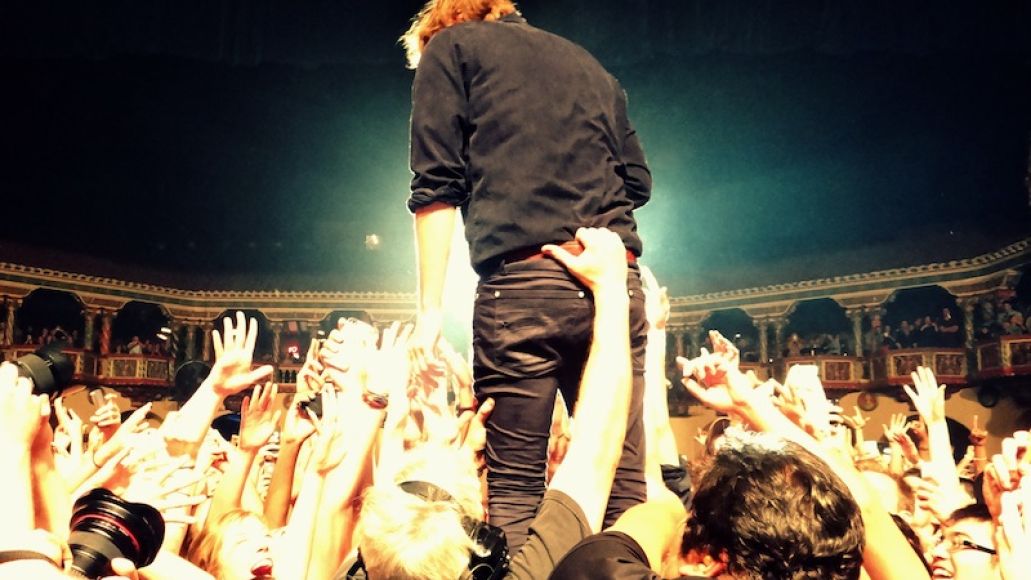 In the cold, early months of 2013, before the year kicked into full swing, back when we lived in a world without “Reflektor” scribbled on sidewalks, and without Miley’s ridiculous tongue/twerk double-punch, and without so many horrifying Breaking Bad reveals, we geared up for the French invasion. Both Daft Punk and Phoenix made big promises for this year, and while Daft Punk’s buzz hummed louder, anticipation for the followup to 2009’s wildly popular Wolfgang Amadeus Phoenix also skyrocketed. Phoenix played Coachella and Saturday Night Live, while Daft Punk teased Random Access Memories via commercials and snippets at the same festival and on that same show. Phoenix made the late-night rounds, and Daft Punk stood up Colbert. Phoenix released a music video recorded in one take and a Take Away Show, and Daft Punk danced in sequin suits behind Pharrell. No matter your stance on the creative output of either band, it would be fair to say that the former worked a whole lot harder this year, with an air of joie de vivre surrounding nearly everything they did. Their day in Chicago this weekend was no exception.

On this leg of their post-festival-season tour of North America, Phoenix was set to play the UIC Pavilion, which has a capacity of nearly 7,000, but the show was moved to the Aragon, packing in about 2,500 fewer people. The downsize from college basketball arena to historic, Spanish-baroque revival ballroom proved to be a fantastic aesthetic switch. As Thomas Mars exclaimed over the deafening crowd, “This is the most beautiful place we’ve ever played.” He shared that the band had been waiting to come back to the Uptown venue, as they took that same stage four years ago in support of Wolfgang. Returning in 2013, the charm of the Aragon (with its courtyard interior, ceiling painted like a swirling night sky, and immaculate wood floors that still have feathers beneath them from when the venue opened as a true ballroom back in 1926) played great companion to the French foursome. The fact that they had to swap to a smaller venue, and then failed to sell out that smaller room until the day before the show, speaks loudly of the band’s year. The material on Bankrupt! didn’t connect nearly as well as the universally adored rushes of perfect pop like “1901”. But that didn’t stop Phoenix from trying their damnedest this go-around. 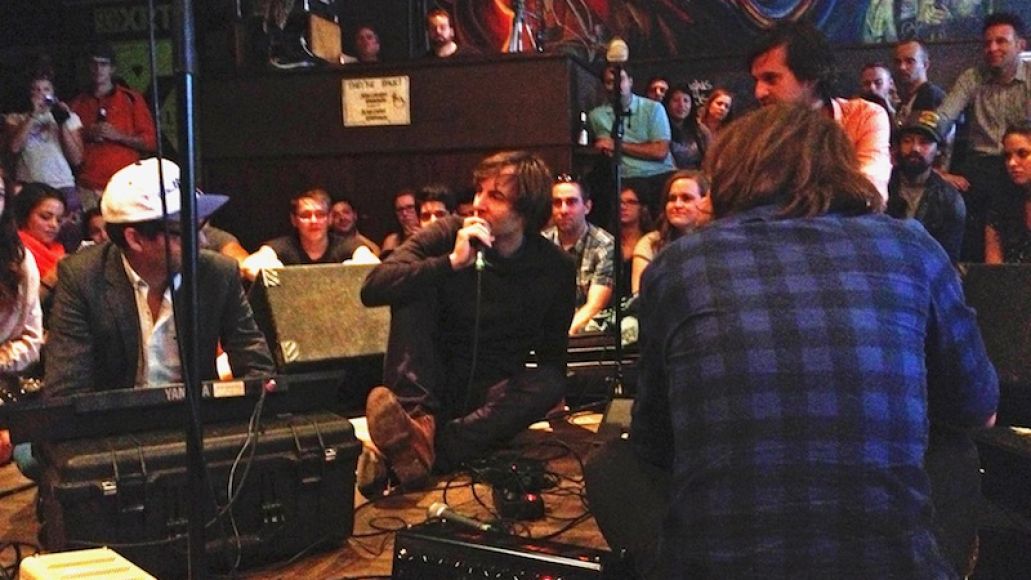 My day with Thomas, Deck D’Arcy, Christian Mazzalai, and Laurent Brancowitz began around 1:50 p.m., as I waited outside of Martyrs’, a small venue up on Lincoln Avenue, for their Live from Studio X performance (put on by Chicago rock radio station WXRT). After the band said hello and strolled through the doors and past the waiting masses, we learned we’d soon be seeing Phoenix in the round, while sitting cross-legged on the venue’s floor. The setup immediately felt like living a La Blogotheque show, the exact inspiration Thomas later cited when XRT DJ Marty Lennartz inquired as to why they opted for the floor rather than the stage. Unlike the band’s latest, unbelievably impressive installment with the French blog, in which they perform in an airplane flying over The Alps, in a small garden outside the palace of Versailles, and from inside of a rowboat on Neptune’s basins, Saturday’s four-song set stuck closer to an early Take Away Show recorded with Bon Iver, in which Justin Vernon performs “Skinny Love” for a small, circled gathering of friends sipping wine on an apartment floor.

The intimate set at Martyrs’ saw the band roll through “Entertainment” (in similar fashion to their homemade video for the song), “Trying to be Cool”, a lovely acoustic rendition of “Countdown”, and “1901” with just a few keyboards and an acoustic guitar. When the set ended, the quartet stuck around to take photos with fans and sign the limited number of gig posters made for the show. Thomas even heard out my request for him to dive into the crowd during the first three songs (while photographers are still allowed to shoot from the pit, instead of waiting until later in the set), which he later honored by leaping in front of me during song number three (“Listomania”) at the Aragon. 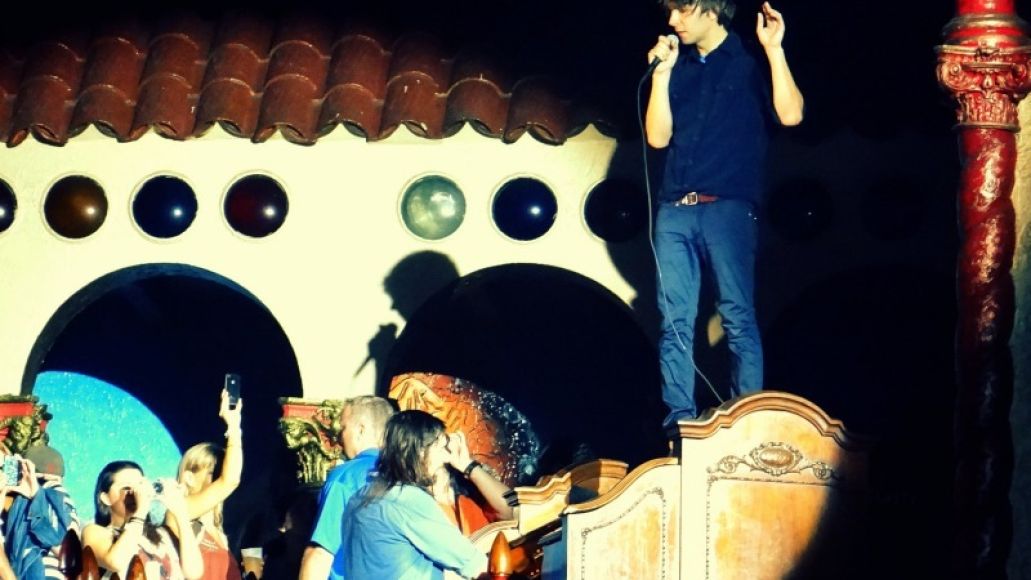 That leap happened five or six hours later, as I settled in for my third installment of Phoenix in two months (not counting my dreamy afternoon). After catching their full sets at both Chicago’s Lollapalooza and San Francisco’s Outside Lands, I knew what I was in for: Thomas’ crowd surfing, the band’s professional preciseness, the career-spanning setlist, and a powerful show book-ended by Bankrupt‘s “Entertainment”. It could have been the way the blow-the-ceiling-off evening set marvelously contrasted with the afternoon’s smaller scale, but it’s likely that the majority of those who only experienced the latter were just as taken by the thrashing guitars during “Run, Run, Run”, the sing-along “Hey, hey, hey, hey”s of “1901”, and the beauty of the set-pausing “Love Like a Sunset”.

So, maybe 2013 proved to be less of a French invasion than originally anticipated. Throughout the year, it seemed as if Daft Punk would appear, and they rarely did. It was always clear that Phoenix would show up, and they did so with the passion of a band who’s going to be doing this for a very long time, despite the step backwards that their last album represented. Their dual-show stop in Chicago was a day-in-the-life peak at who the band is, and anyone who experienced any part of it soaked up some of that joie de vivre without any complaints that Bankrupt! lacked a contender to take on “1901”. Album number six might return the band to filling the UIC Pavilion, or maybe even the United Center, but for the French quartet, it seems they’d be happy as ever if each tour plopped them right back at the Aragon. 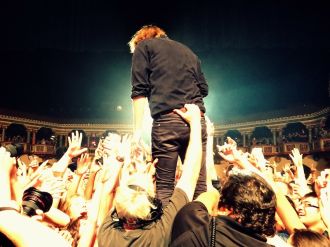 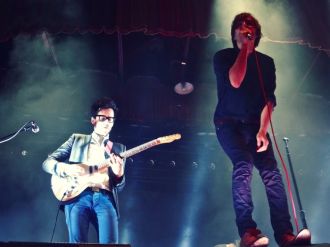 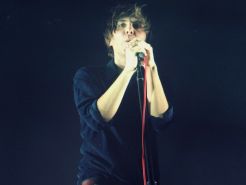 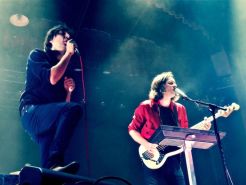