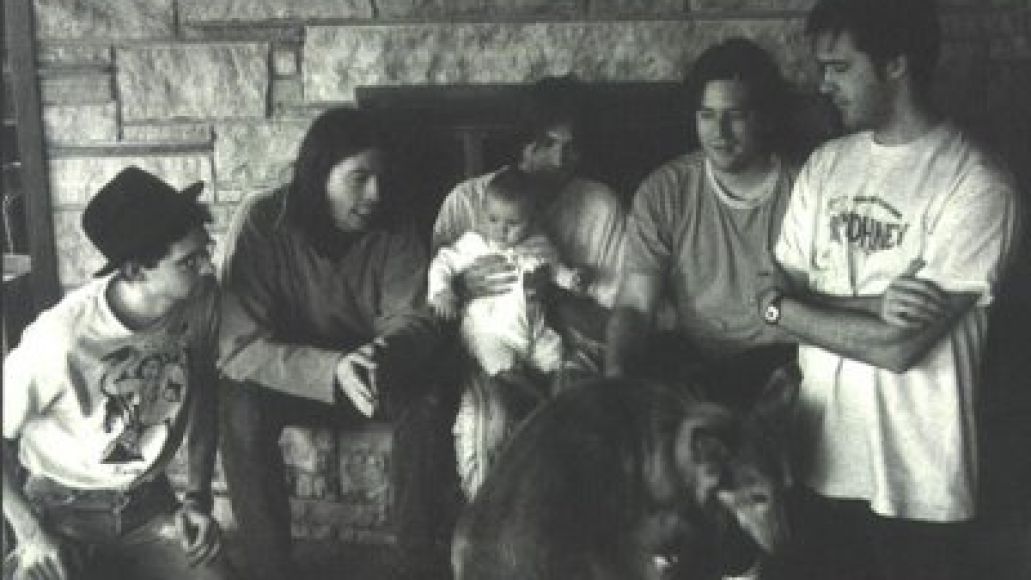 Today, Steve Albini is “the one who knocks,” to crib from Breaking Bad’s Walter White. But back in 1992, around the time Nirvana sought out producers for their Nevermind follow-up, the Big Black and Shellac rocker had only worked with niche, underground acts a la Pixies, The Breeders, or The Jesus Lizard. So, the Chicago legend reached out to the Seattle rockers himself and made his case to produce what would become In Utero with, drum roll please, a four-page fax. How do we know about this? Said document was included with the liner notes for the album’s new Top Star-earning reissue, and as SPIN reports, it’s surfaced online.

Check out all four pages below, which include Albini’s thoughts on production (“I think the very best thing you could do at this point is exactly what you’re talking about doing: bang a record out in a couple of days, with high quality but ‘minimal production’ and no interference from the front office bulletheads”); compensation (“I do not want to and will not take a royalty on any record I record. No points. Period. I thinking paying a royalty to a producer or engineer is ethically indefensible”); and Albini’s one-of-a-kind quips (“If a record takes more than a week to make, somebody’s fucking up”). Then, close your eyes, and imagine what it would be like to receive it yourself. Here’s an image of a fax machine to help jar your memory, too. 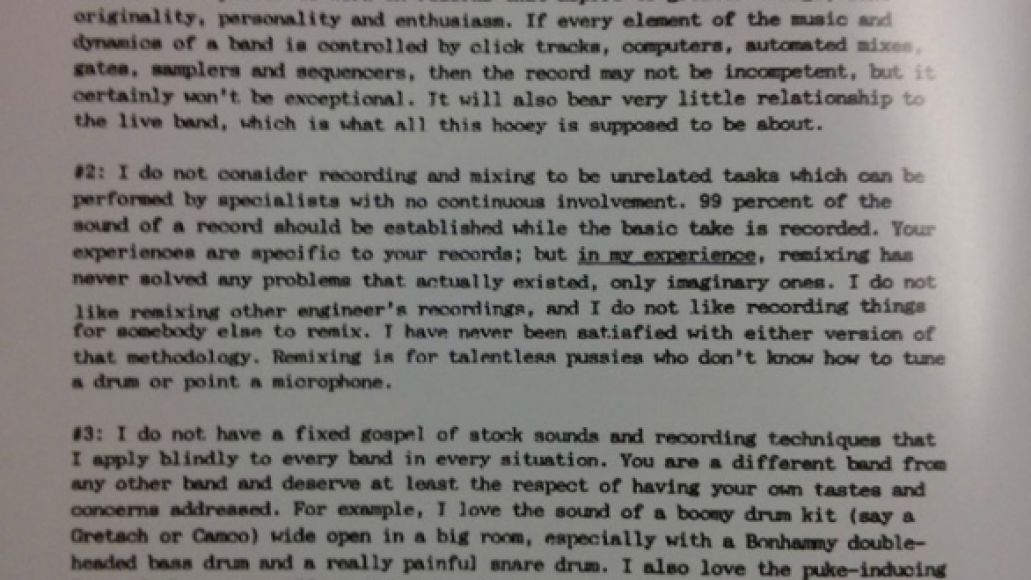 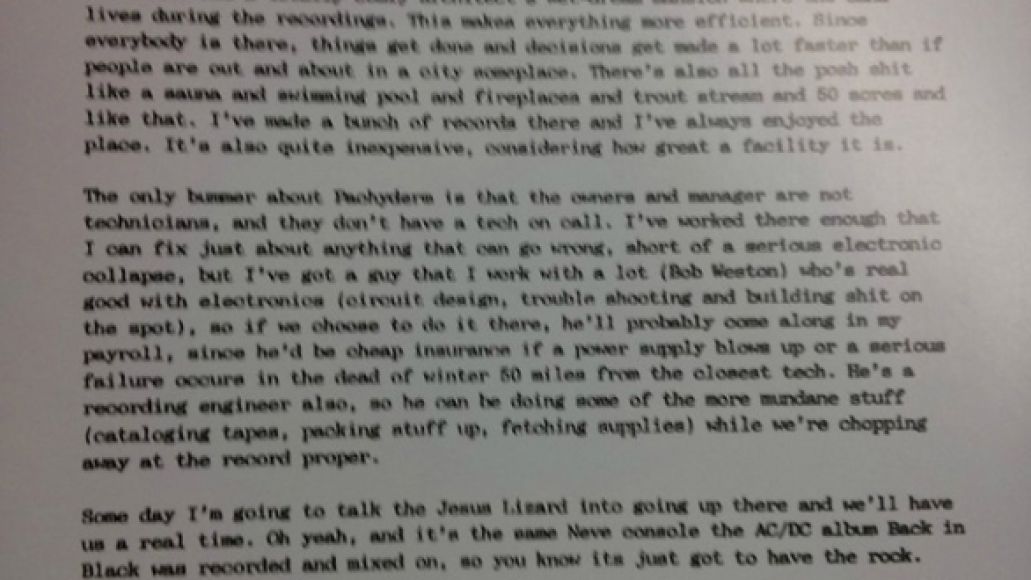 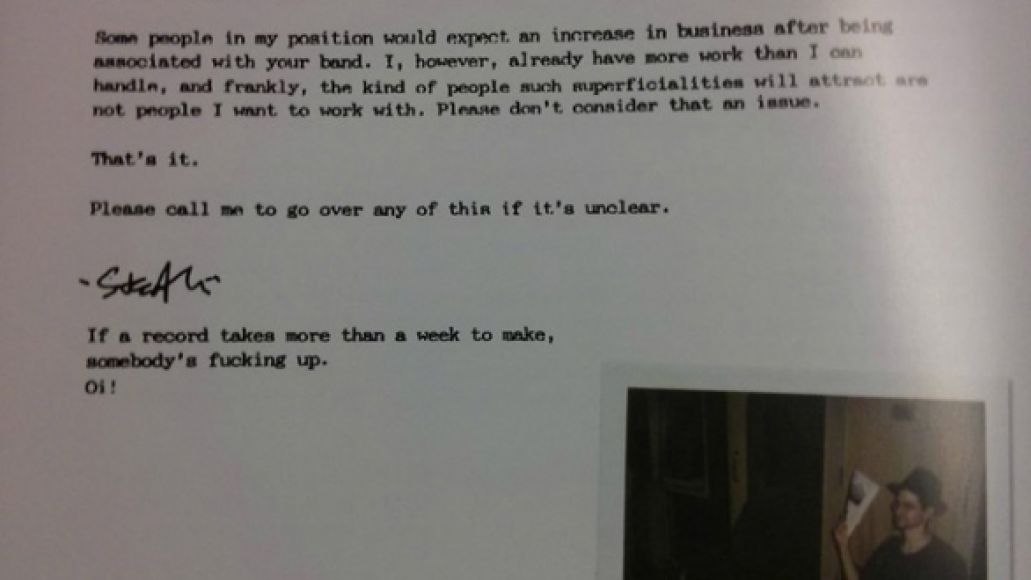 Here’s a transcription of the more notable passages, just in case your eyes hurt from squinting at a photo of a letter scanned onto the Internet.

I think the very best thing you could do at this point is exactly what you’re talking about doing: bang a record out in a couple of days, with high quality but “minimal” production” and no interference from the front office bulletheads. If that is indeed what you want to do, I would love to be involved.

If instead, you find yourselves in the position of being temporarily indulged by the record company, only to have them yank the chain at some point (hassling you to rework songs/sequences/production, calling-in hired guns to “sweeten” your record, turning the whole thing over to some remix jockey, whatever…) then you’re in for a bummer and I want no part of it.

I’m only interested in working on records that legitimately reflect the band’s own perception of their music and existence. If you will commit yourselves to that as a tenet of the recording methodology, then I will bust my ass for you. I’ll work circles around you. I’ll rap your head in with a ratchet…

I have worked on hundreds of records (some great, some good, some horrible, a lot in the courtyard), and I have seen a direct correlation between the quality of the end result and the mood of the band throughout the process. If the record takes a long time, and everyone gets bummed and scrutinizes eery step, then the recordings bear little resemblance to the live band, and the end result is seldom flattering. Making punk rock records is definitely a cae where more “work” does not imply a netter end result. Clearly you have learned this yourselves and appreciate the logic.

I consider the band the most important thing, as the creative entity that spawned both the band’s personality and style and as the social entity that exists 24 hours out of each day. I do not consider it my place to tell you what to do or how to play. I’m quite willing to let my opinions be heard (if I think the band is making beautiful progress or a heaving mistake I consider it part of my job to tell them) but if the band decides to pursue something I’ll see that it gets done.

I like to leave room for accidents and chaos. Making a seamless record where every note and syllable is in place and every bass drum beat is identical, is no trick. Any idiot with patience and the budget to allow such foolishness can do it. I prefer to work on records that aspire to greater things, like originality, personality and enthusiasm. If every element of the music and dynamics of a band is controlled by click tracks, computers, automated mixes, gates, samplers and sequencers, then the record may not be incompetent, but it certainly won’t be exceptional. It will also bear very little relationship to the live band, which is what all this hooey is supposed to be about.

I do not have afixed gospel of stock sounds and recording techniques that I apply blindly to every band in every situation. You are a different band from any other band and deserve at least the respect of having your own tastes and concerns addressed. For example, I love the sound of a boomy drum kit (say a Gretach or a Camco) wide open in a big room, especially with a Bonhammy double-headed bass drum and a really painful snare drum. I also love the puke-inducing low end that comes of an old Fender Bassman or Ampeg gutiar amp and the totally blown sound of an SVT with broken-in tubes. I also know that those sounds are appropriate for some songs, and trying to force them in is a waste of time. Predicating the recordings on my tastes is as stupid as designing a car around the upholstery. You guys need to decide and then articulate to me what you want to sound like so we don’t come at the record from different directions.

Where we record the record is not as important as how it is recorded. If you have a nice studio you’d like to use, no hag. Otherwise, I can make suggestions. I have a nice 24-track studio in my house (Fugazi were just there, you can ask them how they rate it), and I’m familiar with most of the studios in the Midwest, the East Coast and a dozen or so in the UK. I would be a little concerned about having you at my house for the duration of the whole recording and mixing process (if only because you’re big celebrities, and I wouldn’t want word getting out in the neighborhood and you guys having to put up with a lot of fan-style bullshit); it would be a fine place to mix the record though, and you can’t beat the vicinity.

I explained this to Kurt but I thought I’d better reiterate it here. I do not want to and will not take a royalty on any record I record. No points. Period. I thinking paying a royalty to a producer or engineer is ethically indefensible. The band write the songs. The band play the music.. It’s the band’s fans who buy the records. The band is responsible for whether it’s a great record or a horrible record. Royalties belong to the band.

I would like to be paid like a plumber. I do the job and you pay me what it’s worth. The record company will expect me to ask for a point or a point and a half. If we assume three million sales, that works out to 400,000 dollars or so. There’s no fucking way I would ever take that much money. I wouldn’t be able to sleep.

I have to be comfortable with the amount of money you pay me, but it’s your money, and I insist that you be comfortable with it as well. Kurt suggested paying me a chunk which I would consider full payment, and then if you really thought I deserved more, paying me another chunk after you’d had a chance to live with the album for a while. That would be fine, but probably more organizational trouble than it’s worth.

Whatever, I trust you guys to be fair to me and I know you most be familiar with what a regular industry goon would want. I will let you make the final decision about what I’m going to be paid. How much you choose to pay me will not affect my enthusiasm for the record.

Some people in my position would expect an increase in business after being associated with your band. I, however, already have more work than I can handle, and frankly, the kind of people such superficialities will attract are not people I want to work with. Please don’t consider that an issue.

PS – If a record takes more than a week to make, somebody’s fucking up.