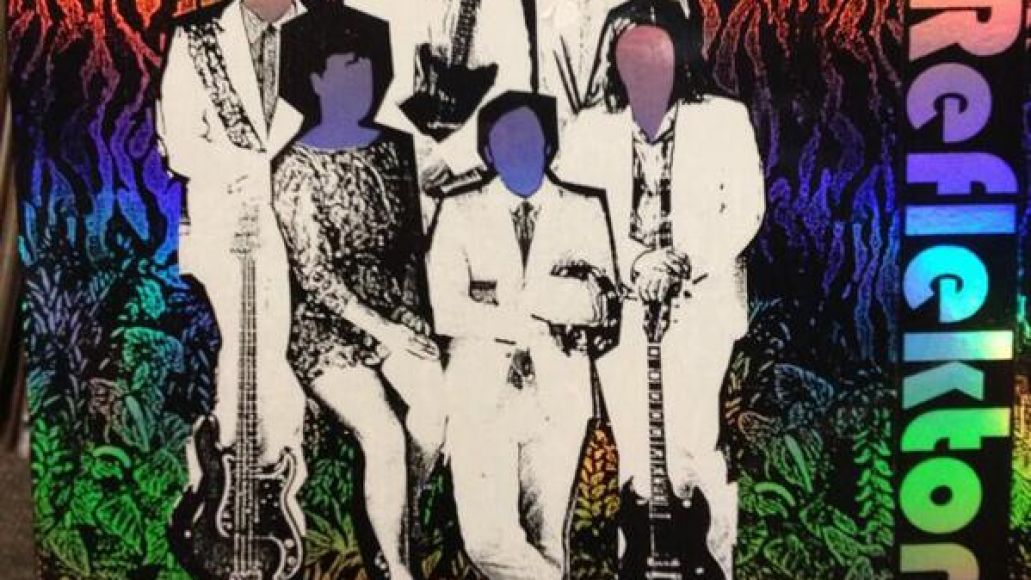 Thanks to strong entries from Prince, Drake, and Danny Brown, it’s been a banner year for album artwork. Looks like you can now add Arcade Fire to mix of year-end contenders. On September 9th, the band will release their new single, Reflektor”, on 12″ vinyl. The accompanying artwork is posted above, via Nashville record store Grimey’s.

According to Empire Records St Albans (via Arcade Fire Tube), the back cover of the vinyl features a tracklist of 14 songs, however, only “Reflektor” and an instrumental version appear the actual vinyl. Update: It’s rumored that the 14 “songs” are actually lyrics from “Reflektor”. The 12″ will be available at record stores across the world on the 9th; a complete list of participating stores can be found on the band’s website.

If you missed any of the Arcade Fire news from yesterday, here’s a quick recap: A video for “Reflektor”, directed by Anton Corbijn, will premiere at 9pm on the 9th. Ahead of Monday’s big premiere, the band previewed new material at a Montreal Salsa club on Wednesday night. The songs were described as “unexpectedly dance-oriented,” drawing comparisons to Talking Heads’ “Once in a Lifetime”, “but if David Bowie had written it while on vacation.”

Check back later today for details on Win Butler’s new one-piece suit, devilish haircut, and Harley-Davidson motorcycle. We also may have an exclusive interview with Will Butler’s dog.

The artwork for Arcade Fire's new single "Reflektor" is here, and it's great