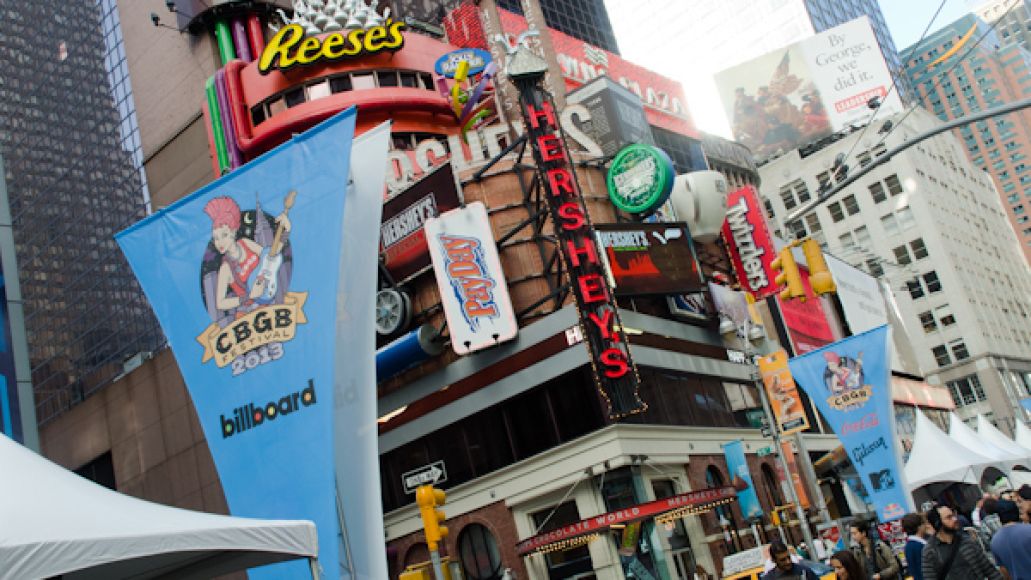 When a person visits Times Square for the first time, it’s admittedly awe-inspiring. The sheer size and flashing color of all that 21st Century American idealism is impressive in its magnitude, if not simultaneously oppressive for the same reason. It’s an accomplishment of scale, a sign of a city’s, a country’s bravado and the promises of a literally bright future ahead. But again, that’s the impression given upon the first – and only the first – visit.

Every subsequent sojourn brings with it a sense of abject unease. Swarms of clueless and heedless tourists clog sidewalks and streets, oblivious to anyone else as they push their way into giant temples of consumerism. The illumination coming from jumbotrons displaying multi-story images of half-naked models and every unhealthy substance you can buy causes a ceaseless day akin to light-based torture techniques. It’s deafeningly noisy, and even smells artificial; it’s Disney Land in the heart of America’s largest metropolis.

So, clearly, Times Square is not the place I would normally choose to be on a Saturday afternoon (especially with Comic Con in town). That’s why I found it so amazing how CBGB Festival managed to turn Broadway between 46th and 54th into not only a tolerable place to be, but a fairly fun one, too. 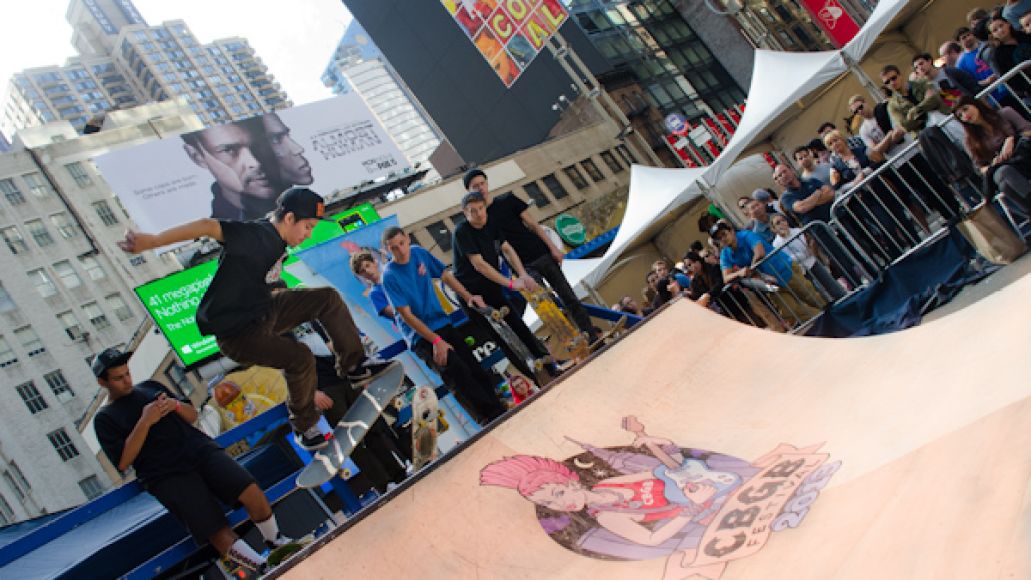 Entering the festival space via 49th, I walked right into the middle of a pizza eating contest. Five young competitors were doing their best to plow through full pizzas covered in all the fixings, provided by Two Boots Pizza. More local food favorites (minus the competitive eaters) were also found under the white tents lining the avenue, from Crif Dogs to BGR Burger Joint to even Brooklyn Popcorn.

As with the chow, CBGB did well to give a fairly full festival experience in very limiting space. There was face and nail painting, a rock climbing wall, and even a little autograph wall like an extremely (extremely) scaled down version of Bonnaroo’s graffiti barriers. A mini-ramp had skaters rousing applause and awe from a consistent crowd. Seasonally appropriate attractions also made for smiles, like the immensely skilled pumpkin carvers and the Smashing Pumpkins booth, where people could relive their trouble-maker youth and actually smash pumpkins. Small platforms spotted the avenue, hosting acoustic performances from young musicians giving away CDs as publicity. 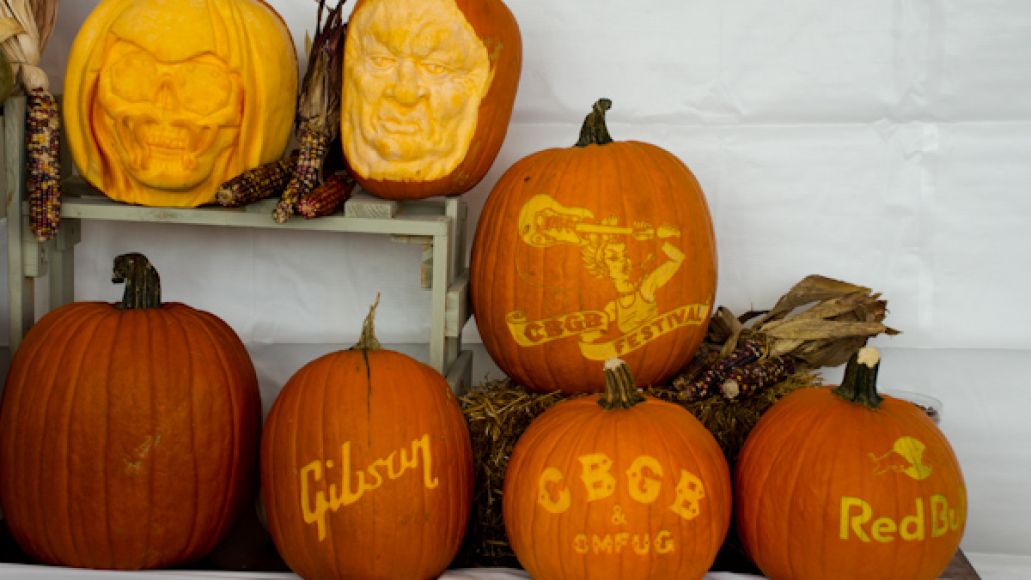 What made this all remarkable is that in a space usually so irritating, all of this was rather comfortable. With a lineup boasting a beloved modern icon, a hometown indie favorite, and one of the best touring acts around, reasonable expectation pegged this day as a shit-show. But every other NYC street fair I’ve ever seen has been far more insufferably populated. It seemed most of the folks walking through Times Square had no idea what was happening. “I wonder what this is?” and “What’s CBGB?” were regularly overheard questions. And those who wandered in seemed to wander out just as quickly. Not only was getting up and down the avenue a relative breeze, but getting through the loosely packed stage crowds was highly manageable. After coming out of the photo pit during My Morning Jacket, I had no problem locating and reaching my friend a few people back from center stage.

Those who did hang around were clearly there for the impressive names on the tiny bill, and they were rewarded with quite a few treats. James Murphy kicked off the evening with a smooth DJ set on 46th Street. He smiled and sang along to his esoteric selections of funk, soul, and R&B dance cuts, but while the crowd happily grooved along, they showed the most spark once Murphy started dropping more modern sounds. (Overheard: “I like him better in LCD Soundsystem than I do as a DJ.”) 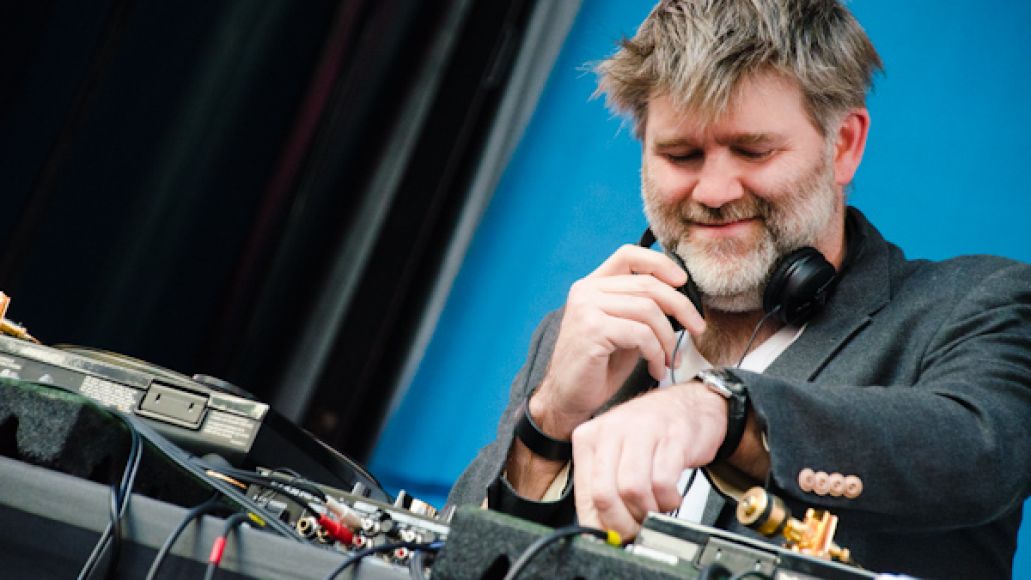 Grizzly Bear (who also noticed how surprisingly unclustered the event was) took their spot right on time at the other end of Broadway. For some strange reason, the 54th Street stage was labeled as “featuring up and coming artists”, even though it welcomed local royalty in GB and, earlier, a big-name supergroup in Divine Fits. Misnomers aside, Grizzly Bear held down their spot in front of the Late Show with David Letterman sign. Their lush harmonies were a sweet fit for the cool evening air as they ran through a selection of crowd-pleasers with their small set. (Overheard: “Ya know, I think there’s quite a future for these chaps.” Read: sarcasm.)

As well as GB did with their allotted time, headliners My Morning Jacket crammed a major festival-sized set into just eight songs. They pulled out “Circuital”, “I’m Amazed”, “Wordless Chorus”, and the obvious closer “One Big Holiday”, touching on each of their last four albums. But the real highlights came due to the stunning list of guests Jim James and crew brought on. Antibalas were there to supply horns, while Alabama Shakes’ Brittany Howard and tUnE-yArDs’ Merill Garbus came out to reprise their Fallon performance of their Fela Kuti cover “Trouble Sleep Yanga Wake Am”. They didn’t bring matching outfits this time (though Garbus was rocking some sweet orange Converses), but they brought two powerful voices that when added to James’ own pipes equaled a uniquely dynamic performance. 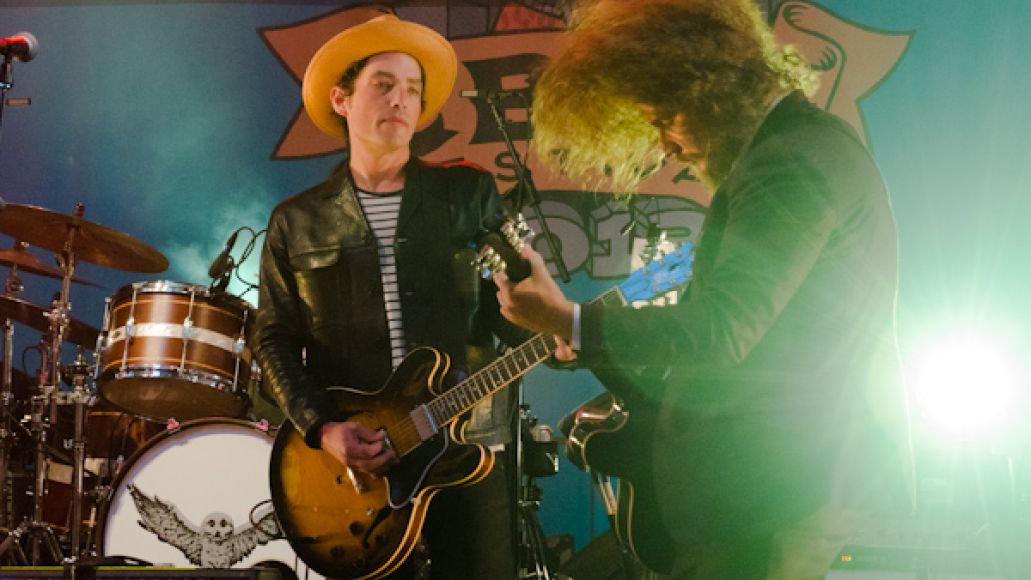 The ladies’ appearance wasn’t terribly surprising, as Howard has been a regular presence by James throughout the year. Jakob Dylan’s guest spot, however, was a true surprise. James had already performed with Bob Dylan this summer, so why not complete the family dance card with Jakob? The Wallflowers frontman trotted out for a take on The Band’s “Don’t Do It”. He looked good, played good, but looked a bit static next to James’ hair and guitarist Carl Broemel, who may have given one of his most energetic performances ever. (Overheard: “How does he do that?!” and “Aw, no more sax.”)

Kudos due to the CBGB organizers and the folks who made the day run so smoothly (here’s looking at you, NYPD), especially considering the quality of the lineup. Still, it was Times Square. Scalpers were pushing theatre tickets, smooth-talkers were convincing folks to catch a comedy show, and the homeless were asking for contributions. It felt odd seeing ads for Jersey Boys and Captain Phillips flashing on my left, American Eagle and American Horror Story on my right while MMJ tore the stage down in front of me. “It’s amazing seeing you all in this surreal, bizarro, uh…,” James faltered from the stage. “I almost can’t even handle it.” And as soon as they ended, I couldn’t either. Times Square was a respectable place to be for an early-evening this Saturday, but only for a few hours, and only thanks to CBGB.