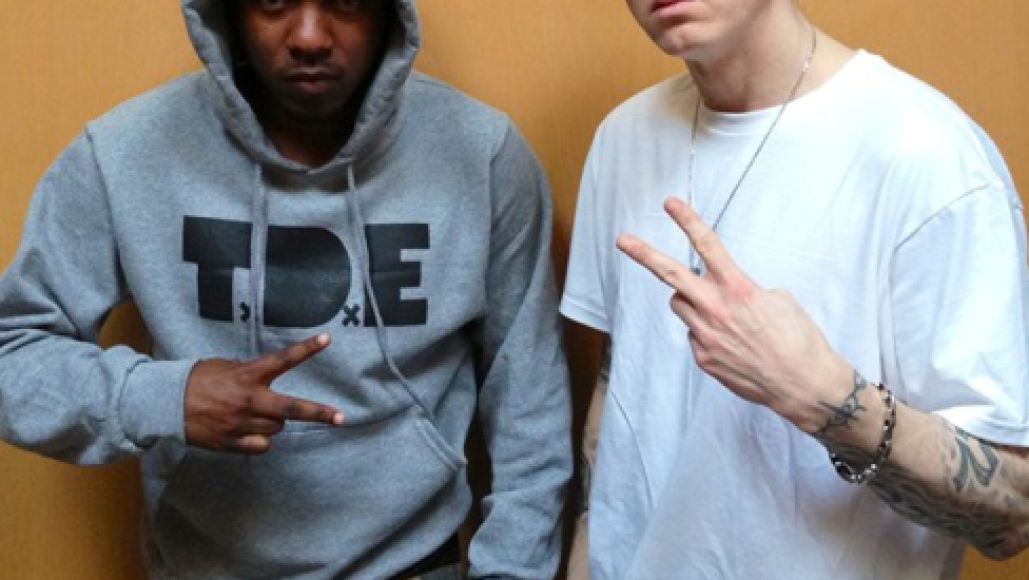 In many ways, Eminem and Kendrick Lamar are two MCs ripped from the same mold. They both emerged from harrowing landscapes, one Detroit, the other Compton, before finding a kind of creative mentor and source of direction with Dr. Dre. They each serve as the respective figureheads of their own groups (D12 and Black Hippy, respectively), maintaining close ties to their roots despite clearly shining as solo acts. And both routinely buck off any labels or tags thrown their way, preferring to stand on the merit of their quick wits and deep reservoir of lyrical blows. With so many paths of commonality, the duo finally come together to commiserate over broken hearts and burned bridges with their collaborative track “Love Game”.

Whereas the common goal is to lay waste to old lovers, the rappers find vastly differing approaches in venting their heartache. Rapping over a sample of Wayne Fontana and the Mindbenders, Eminem asserts his newfound status as a grizzled veteran, eschewing any sense of progression or consciousness by ruthlessly combining more hackneyed name-dropping with misogyny-turned-humor, practically reveling in his own moral shortcomings. Meanwhile, Lamar further proves his worth as rap’s hottest commodity of 2013 by once more upping his game. Sure, he gets a little blue (“I want you bad as the head shattered on George Zimmerman”), but the core of Lamar’s verse sees him confront the Sherane character, responding to her singular lust for fame by kicking her to the curb, asserting his intellectual superiority, and making it readily known that K. Dot is no one’s victim (and with a Mr. T reference, no less.)

Listen to the track below (via MTV):

“Love Game” is the latest track off Em’s The Marshall Mathers LP 2, due out November 5th via Interscope. For more sounds, be sure to check out the Beastie Boys-inspired “Berzerk”, the Call of Duty floater “Survival”, the less-than-holy “Rap God”, and the Rihanna-aided “The Monster”.

Listen: Eminem and Kendrick Lamar together on "Love Game"