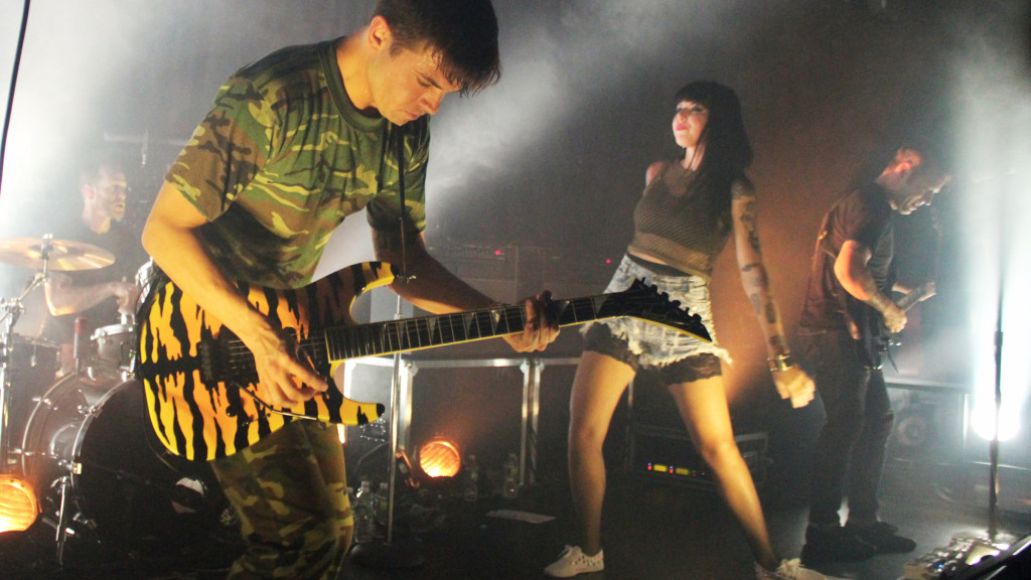 Things Sleigh Bells’ stage manager did just before their set at New York’s (Le) Poisson Rouge Saturday night: break the seals on all the water bottle caps, wipe the fingerprints off singer Alexis Krauss’ stainless steel wireless mic, and tape printed-out setlists (font: Impact, naturally) to the front and back of the stage, so Krauss and partner-in-crime Derek Miller could see them whether they were facing the crowd or their stout wall of anonymous amps (the logos had been meticulously taped over). Details like these hinted at how far the band has come in a such a short span of time, from what was essentially a very loud bedroom project to a festival-hardened, arena-ready machine, complete with a massive lighting rig. It’s a testament to the appeal of this band that what followed felt anything but rehearsed. Rather, we were Treat-ed to a welcome blitzkrieg of joyful release.

Sleigh Bells were here to celebrate a few milestones: the imminent release of their third album, Bitter Rivals, the four-year anniversary of the first time they played (Le) Poisson Rouge (“It was just the two of us and an iPod,” Krauss joked), and, perhaps most notably, the addition of a live drummer. At least, that should have been the most notable thing, but in truth the live drumming added more of a visual element than an aural one, as the band still seemed to be relying on prerecorded tracks to pump up the sound. It didn’t matter: Krauss’s commanding stage presence and a lot of tactfully deployed strobe lights were more than enough to keep the capacity crowd losing its shit for 50 minutes straight.

And this crowd was here to have a good time, no doubt thrilled they were seeing Sleigh Bells in a much more intimate and exclusive space than the one they’ll be playing next month, Terminal 5. LPR’s unique triangular stage and lack of photo pit barriers allowed Krauss to march right up to the audience, and saunter along the row of bass amps as the arms of enraptured fans grasped at her many-studded ensemble (bracelets, jean shorts, and shoes included). Not surprisingly, older material like “Kids”, “Crown on the Ground”, and “Riot Rhythm” got the biggest response, while tracks that can be kind of grating on record (like “A/B Machines”) positively blew the roof off here — and culminated in fans crashing the stage en masse.

New jams “Minnie”, “Tiger Kit”, and “Bitter Rivals” proved effective and didn’t deviate much from Sleigh Bells’ winning formula. But it was encore opener “Young Legends” that held the most promise. For this one, Miller applied his patented staccato riffing approach to an acoustic guitar, while Krauss held court with some of the most immediate sing-song melodies in her arsenal. It’s the closest the band has come to recreating the magic of “Rill Rill”, a highlight and stylistic outlier from first album Treats — not to mention the subject of a recent iPhone commercial — that, tellingly, they did not play here. It also suggested a new direction for an act that will need one if they’re to remain relevant in this age of constant, web-driven audience turnover. But for now, Sleigh Bells have the spotlight, and the strobe lights, and when they’re in their element they’re essentially unstoppable.

Anticon associate Jel opened the show with a short set of MPC-centric electronic jams, referring to himself as a “BJ” — button jockey — rather than a DJ. His material, sometimes abetted with beat poetry-like vocals, was shrewd and catchy, an inspired pairing with the headliner. 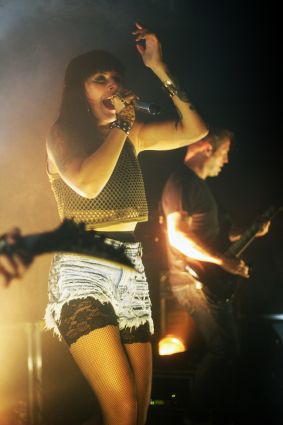 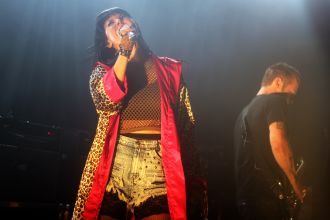 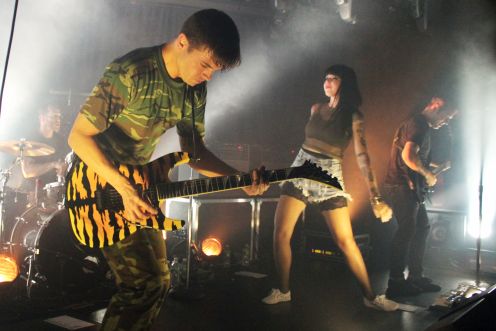