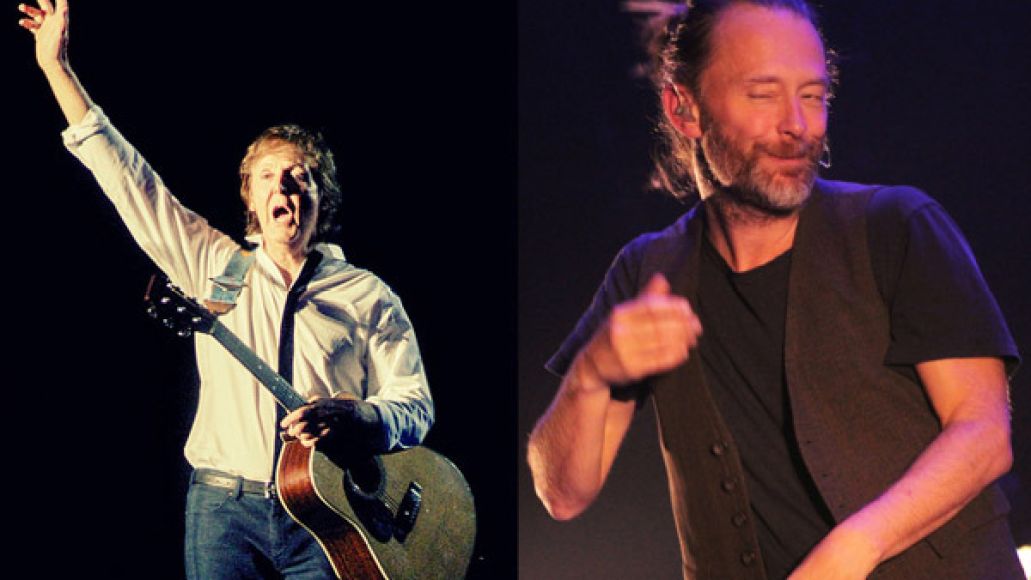 True story: Paul McCartney is scared to call Thom Yorke. In a new interview with NME, the former Beatle expresses his desire to work with the Radiohead/Atoms for Peace frontman, but he’s nervous about getting a “no, thank you.”

“My daughter Stella is very keen,” McCartney says. “She’s got a project, she keeps saying to me, ‘Ring Thom and just go into the studio and just see what you come out with.’”  Later in the interview he adds, “I’m a bit sort of paranoid to just ring him up. ‘Hey Thom, it’s Paul here. What do you fancy, what are you doing? Do you fancy writing something?’ Just in case he says, ‘Er, actually I’m busy.’”

Of course you’re thinking, “Who says no to Paul McCartney?!” Well thing is, Yorke’s done it before. McCartney wanted Yorke to play piano on the Memory Almost Full track “Mr. Bellamy,” but the wonky-eyed one had a good reason for turning him down. “Uhh, ’cause I can’t play piano. Not like that… I really liked the song, but the piano playing involved two hands doing things separately. I don’t have that skill available. I said to him, ‘I strum piano, that’s it.'”

Our advice: just don’t ask him to play keys, Macca, and you can probably make this happen. Look, we’ll make the call if you don’t want to, you just let us know.

McCartney also reveals an interest in working with Damon Albarn and Bob Dylan in the interview, which will hit stands this month. Below, take a listen to the song Yorke couldn’t play.

Paul McCartney wants to work with Thom Yorke, but is too nervous to ask