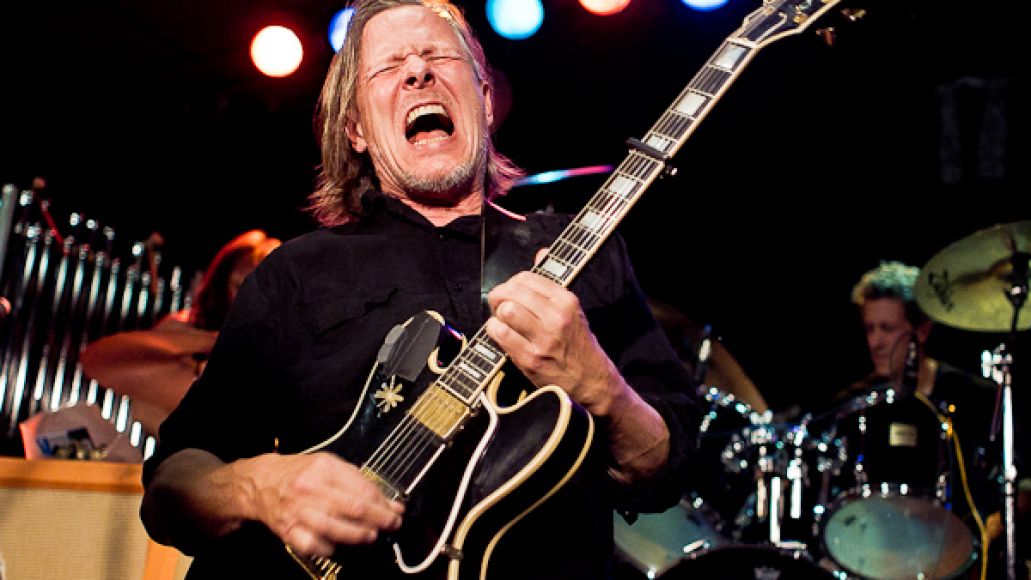 Not Here / Not Now is a limited-edition two-disc set recorded in Barcelona, Spain and Melbourne, Australia amidst the band’s 2012-2013 world tour. It also includes two “crude acoustic demos” of songs destined for the band’s new album. Its handmade packaging is made with linoleum block print (printed on hand-brushed white ink) and features a drawing created by Nicole Boitos (signed and numbered 1 – 2000), based upon a concept/sketch by Gira. Each cover also features a signature from Gira himself.

The live album is available now in multitude of configurations, all part of the band’s crowd-funding campaign. For $100, fans will receive an “executive producer” credit on the band’s new album, while $500 will get you a “video of a simple, short, original song, acoustic guitar and voice, with customers’ name in the song, praising the customer, his or her ancestors, thoughts, dreams, and future or past lives, forever,” written and sung by Gira. Other options include VIP guest list status to the band’s upcoming tour and a personalized screen printed poster.

Again, proceeds from the fundraiser will be put toward the band’s new studio album, the follow-up to 2012’s Top Star-earning The Seer. A press release adds, “The source material for the album is music developed in live performance during the recent tours, as well as songs written by Gira on acoustic guitar, orchestrated and arranged in the studio. Numerous special guests are in the works, but at the time of this writing, further information is not available. The schedule is open-ended, but completion is expected in January of 2014, with a release of late Spring 2014. Extensive Swans touring will ensue shortly thereafter.”

Gira discussed the project further on the band’s website:

As was the case with our last studio album, The Seer, we’re just going to go in the studio now and record endlessly, as a first stage. In this instance, we’ve managed to wrangle a great, live-in studio in the middle of the desert in West Texas. Once the tenure of my friends in Swans is finished there, I’ll remain, recording more with other cohorts, and I’ll travel around a bit, trying to find ways to wrestle the music into a shape that suits it’s core intent (and maybe also contravenes it). I hope the songs change and develop beyond recognition. Along the way I’ll get  more friends in to augment the sounds, and then hack at it and add more (always more) until there is no more, then start cutting things away again. I won’t pay any attention to the LENGTH of the thing, in the end, or how long it takes to make – or how many enemies I make along the way – ha ha!. Who knows how long the final effort will be – 2 hours, 3, 4? Maybe it’ll just be a strangled little worm, 10 minutes long. At the end I’ll figure out some way to put it in some sort of format that makes sense. During the last record, I realized, what difference does it make? We’re not exactly trying to make music that’s accessible in the regular music world, so why accept any constraints whatsoever? What’s an “album,” and who cares? People that are inclined to be interested will find it if they want. Just let the music dictate the final shape, nothing else. So I don’t know what will happen. Once the music shows me that it’s had enough of my interference it’ll be done, and that’s it. For that last bit of freedom – the faith you’ve shown in these endeavors – I am sincerely grateful to supporters such as yourself, indeed!

Not Here / Not Now is what has now become known as a “fundraiser” or “crowd-sourcing” CD. I’ve been doing this sort of hand-made release since 2000 (then, with Angels of Light), and with the support of people such as yourself, have been able to record and work at a standard that would have otherwise been utterly impossible. THANK YOU, endlessly! …I also remain grateful that you – our live audience – have felt it worth your while to attend our concerts, and my hope is that you’ve experienced some of the joy we experience while playing this music. THANK YOU, again, endlessly!

Here’s the tracklist for the live album, along with live performance footage of “Toussaint L’ouverture” from Primavera Sound 2013.