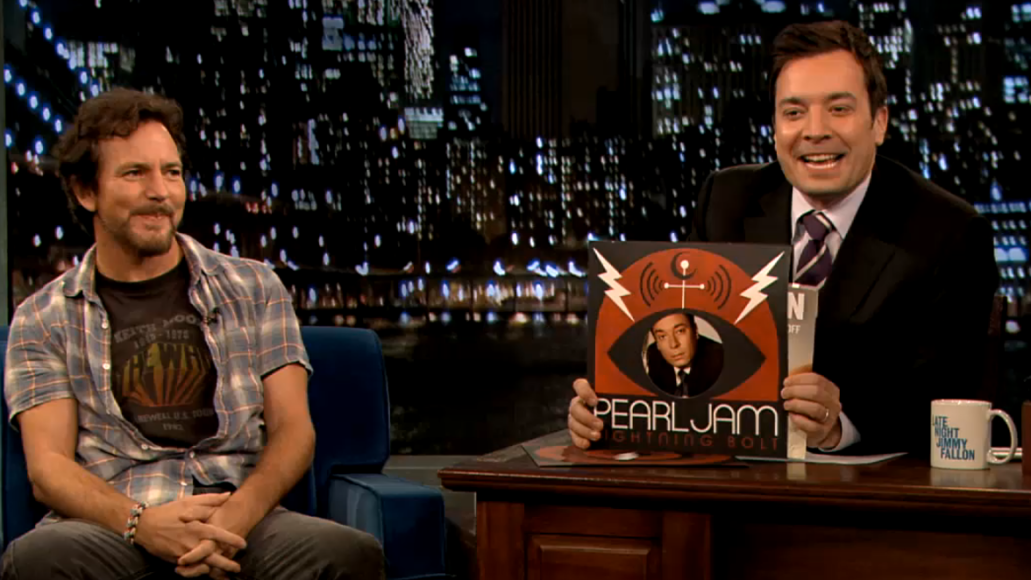 Late Night with Jimmy Fallon’s week-long celebration of all things Pearl Jam came to a close Friday night. The iconic Seattle outfit supported the release of their new album Lightning Bolt with a performance of its title track. Plus, frontman Eddie Vedder spoke to Fallon and actor/Pearl Jam fan Javier Bardem (who was also a guest last night), reminiscing about the time Bardem introduced the band and left the audience in tears as well as Vedder’s Grammy Award-winning collaboration with Fallon, “Balls In Your Mouth”. Replay it all below.

If nothing else, “Pearl Jam Week” yielded an entertaining, if not unpredictable, run of late-night TV. On Monday, Chris Cornell and The Avett Brothers teamed up for a cover of “Footsteps”. Then, on Tuesday, a clean-shaven Robin Pecknold made his first television appearance in two years with a rousing take on “Corduroy”. Things took a turn on Wednesday when country singer Dierks Bentley, accompanied by PJ guitarist Mike McCready and The Roots, led an unfortunate, lackluster rendition of “Alive”. Luckily, Pearl Jam turned it all around starting Thursday with a sterling performance of “Sirens”.