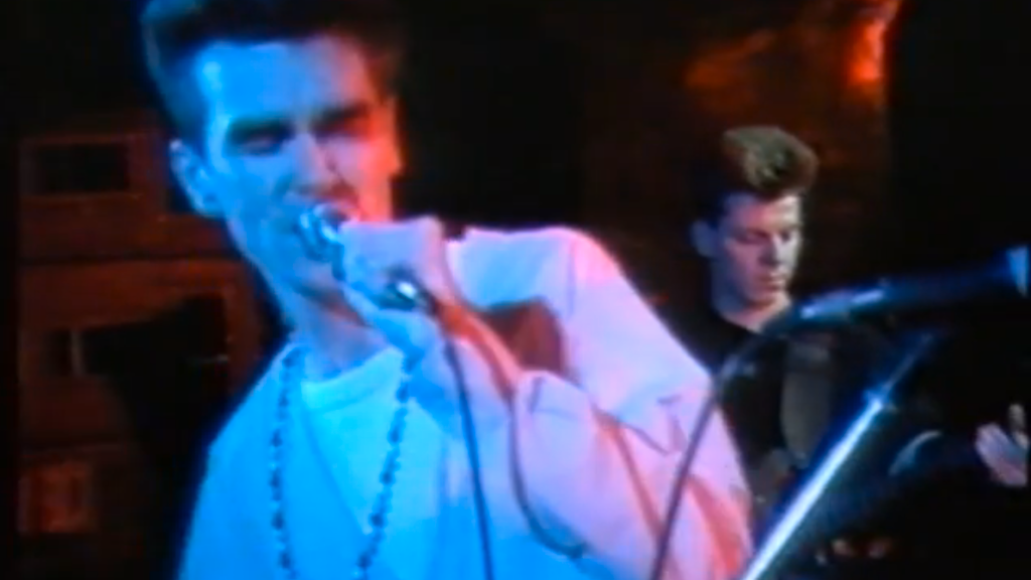 Welcome to Video Rewind. Every Friday, a CoS staffer shares a beloved video clip dug up from the depths of the Internet. Consider it a quick jaunt down memory lane via moving pictures. Today marks the 31st anniversary of The Smiths’ first live performance. In light of this, Henry Hauser highlights the earliest available live footage.

One score and eleven years ago, The Smiths brought forth on that continent (Europe), a new band, conceived in Steven P. Morrissey’s twisted noggin, and dedicated to the proposition that ‘80’s synth-pop is repugnant twaddle for vapid wankers. Though there’s no footage of The Smiths’ inaugural concert, we’ve got the third-best thing: 29 minutes of tight shot video from performance #3.

Shrill yelps carry across the Manchester crowd, as a baby-faced Morrissey is waved onto the Hacienda nightclub stage. After thoroughly bewildering the audience with a confounding introduction (“We are The Smiths. We are not the Smiths. We are The Smiths”), Morrissey starts emphatically waving a wilting bouquet of yellow daffodils in the air. Kicking off the set with “Things Take Time”, 19-year-old Johnny Marr thrashes at his crimson Fender to lay a scathing foundation for Morrissey’s self-depicting lyrics (“I know that I’m / The most inept / That ever stepped).

Tapping “Miserable Lie”, The Smiths’ front man – donning a billowy albescent cardigan tucked into tight black trousers- runs a hand through his thick black hair as he fires up the crowd by screeching a jarring falsetto, “I need advice! I need advice! / Nobody ever looks at me twice!” Though the alternative rock icons would go on to play hundreds more shows and hone their act considerably, there’s something about the raw and delirious vitality of an early gig that oozes authenticity. The Smiths, which would “perish from the earth” in ’87, were a critical force in forging a “new birth” of rock music on the other side of the pond. The Smiths are dead. Long live The Smiths.