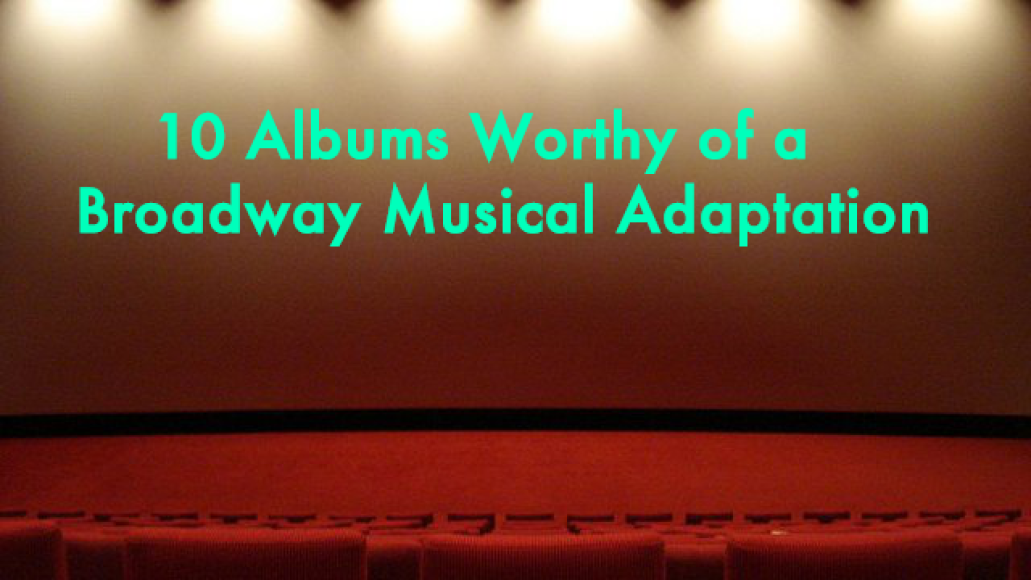 A couple weeks back we learned that what the world needs now, in addition to “love, sweet love,” apparently is a Broadway adaptation of Alanis Morissette’s 1995 magnum opus, Jagged Little Pill. Two questions immediately sprang to mind: 1) How did we as a species survive the last two decades without this, and 2) what could Jagged Little Pill the musical possibly be about? In response to the latter, thoughts immediately jumped to one of those I Love the ’90s VH1 specials, where they speculated that the vitriolic “You Oughta Know” was all about Morissette’s soured relationship with Dave Coulier. But surely even the most seasoned Broadway director couldn’t craft two hours of singing and dancing solely around Joey Gladstone. Uncle Jesse, maybe.

So, while we may skip Morissette’s musical and hold out for Jagged Little Pill on Ice, she did get us thinking about what records we’d be curious to see adapted to the stage in grand Broadway style. Consequently, the last couple of days sort of resembled that scene from The Producers where Zero Mostel and Gene Wilder sit amid a slush pile of manuscripts: Androgynous rock star Ziggy Stardust acts as alien conduit sent to warn earthlings of their planet’s final days… Damn, it’s too good. Next!!! But after days of digging and mulling, we finally settled on 10 records we’d gladly pay to see performed as Broadway musicals; and what’s more, we even volunteered some legwork to future producers by concocting potential plots for these non-narrative albums.

Now, we just need to sit back and wait for that phone call from the Tonys. Curtain up.