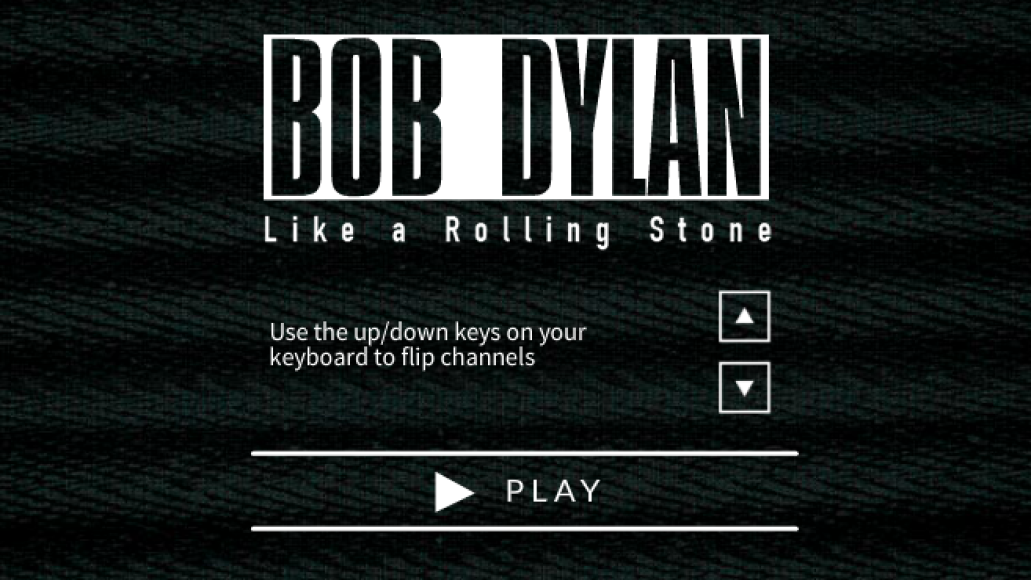 Never one to play by the rules, Bob Dylan has bestowed his 50-year-old classic “Like a Rolling Stone” with an interactive music video. But before you take the streets with pitchforks, take a second to experience the video, because it’s quite genius.

As Mashable reports, Dylan has teamed with digital agency Interlude and director Vania Heymann. Mimicking a television set, the video allows users to surf through 16 different channels and watch a variety of shows, everything from Price is Right to ESPN to Pawn Stars. Even Danny Brown makes an appearance. However, regardless of the channel, each character is lip syncing along to “Like a Rolling Stone”, serving as a biting commentary on excess and what it all means.

In light of all the video, I think it’s appropriate to highlight a passage from Mike Madden’s essay on “Like a Rolling Stone”, which appeared on our list of The Top 100 Songs Ever.

How does it feel? “Rolling Stone” takes aim at one Miss Lonely who’s encountered a not-so-simple twist of fate; formerly of “the finest school,” she’s now “scrounging for [her] next meal.” But while most listeners at first find the song to be a put-down to its subject, it’s actually more like a wake-up call. By the end, after four verses, many more internal rhymes, and brief appearances from Napoleon, jugglers, clowns, and “the mystery tramp,” Dylan’s aphoristic edification takes over: “When you ain’t got nothing, you got nothing to lose / You’re invisible now, you got no secrets to conceal.” If there is any cynicism in the song, it’s rooted in clairvoyance.

Much has been made of “Rolling Stone”‘s six-minute length – most of the other high-charting singles of its day barely hit three minutes. But looking at the song in any such finite terms shrouds its depth. What might be the true magic of “Rolling Stone” is that, even while Dylan’s every word is bellowed loud and clear, you can never quite get to the bottom of it all. There are enough images – but also enough typical Dylan ambiguity – for the song to morph ever so slightly with each play, depending on the listener’s mood, the time of day, etc. It might be hard to quantify the exact extent of the song’s influence on modern music probably because it’s too great to be assessed at all.  But it’s never a challenge to hear, and sometimes even feel, the revolution.

The video coincides with the release of The Bob Dylan Complete Album Collection Vol. 1.