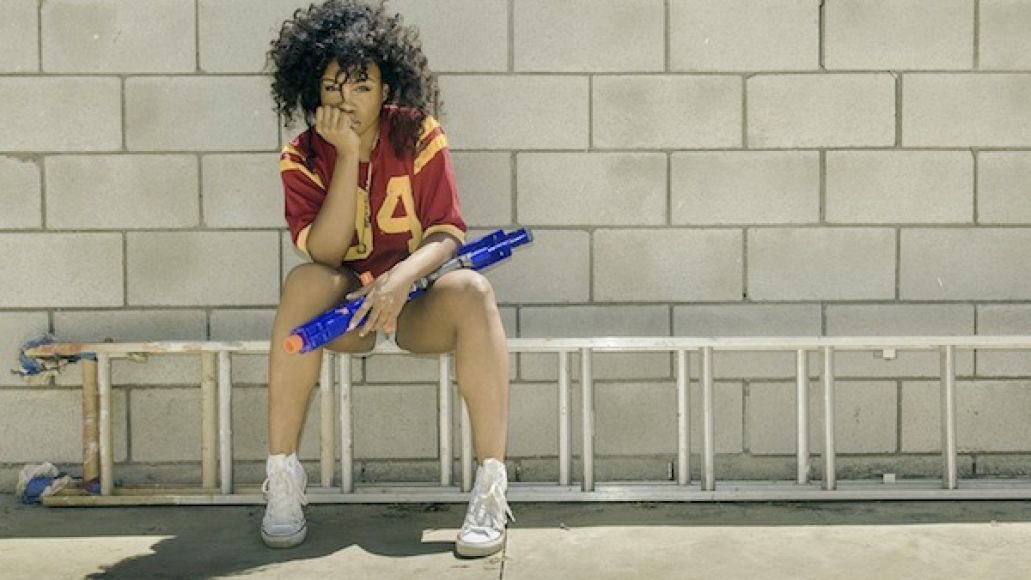 “I told my mom I wanted to go to Harvard Law School. Then I wanted to be Lisa Simpson, then a veterinarian,” SZA says, giggling on the phone. “I wanted to be a lot of things, a lot of different times.” On a rainy Thursday afternoon, the 24-year-old artist, born Solana Rowe, is reflecting on her childhood, the many professions she’s considered, and everything that’s led up to the here and now. Not long after releasing her S EP this past spring, she’s become one of the hottest new R&B acts, not to mention the latest to join Top Dawg Entertainment’s roster, an elite collective led by today’s hip-hop king, Kendrick Lamar.

Although music wasn’t always a focal point, it’s what is saving SZA now — it’s her natural remedy and therapy, not only a way for her to make sense of the world, but a way to find her own place within its madness. The songs that have earned her attention and praise thus far aren’t merely glossy studio byproducts, but the critical results of her stripping away all the adolescence and awkwardness, the answers uncovered while on her journey to reveal the real SZA.

Rowe spent some time in St. Louis, Missouri, but calls Maplewood, New Jersey her real stomping grounds. Small but affluent, it’s the kind of town where everyone knows each other’s business and skinny, blonde cheerleader-types and Christian Bible study groups were the norm. Which is all to say that it was a rather strange and difficult environment for Rowe, a black girl growing up in a conservative, Muslim family.

“I didn’t have a perm, I had braces and acne,” she points out. “I was super accident-prone even though I was really coordinated in sports. I was just growing weirdly and oddly.” At one point she was one of the best gymnasts in the nation, but she’s quick to bring up the fact that no one she knew really cared for the sport and that she lacked much of its required grace and elegance. With a hint of self-deprecation in her voice, she easily laughs off those years, citing her “god-given random leg muscles” as the real heroes behind those stellar vault and floor exercises. Despite her accomplishments, Rowe still felt as though she stuck out like a sore thumb.

“I feel like I was surrounded by perfect people — my friends had the best hair and the best clothes, the best laugh, and were all super social, and all the boys liked them,” she recalls. After we exchange LFO and “Summer Girl” anecdotes, she adds in with a chuckle, “Everyone there was literally an Abercrombie model.”

Her “old school” parents also put somewhat of a strain on her social life, strict when it came to all things related to youth and pop culture. They weren’t concerned with fashion, trends, and boyfriends. “This is not the kind of life my parents roll with,” she says bluntly. “They don’t even care what you’re wearing or what your hair looks like, they just want to know, ‘Did you go to school and what the hell did you learn?'”

Sheltered from TV and radio, she grew up siphoning what she could here and there from random mixtapes from classmates. Acts like Miles Davis, Björk, John Coltrane, and Wu-Tang Clan populated her musical landscape. Though her musical discoveries were limited in quantity, they varied greatly in style. Her well-rounded glimpse at different genres helped shape her taste into one that was accepting of sounds from all across the spectrum.

Rowe’s attraction to music, unlike her dreams of becoming a marine biologist or law student, never quite went away. In fact, after some time, she realized her own talents after many friends praised her original songs — fun, homespun creations built with beats taken from the Internet. She ended up following this new calling, the many years spent feeling like an outsider a natural wellspring of creative inspiration. 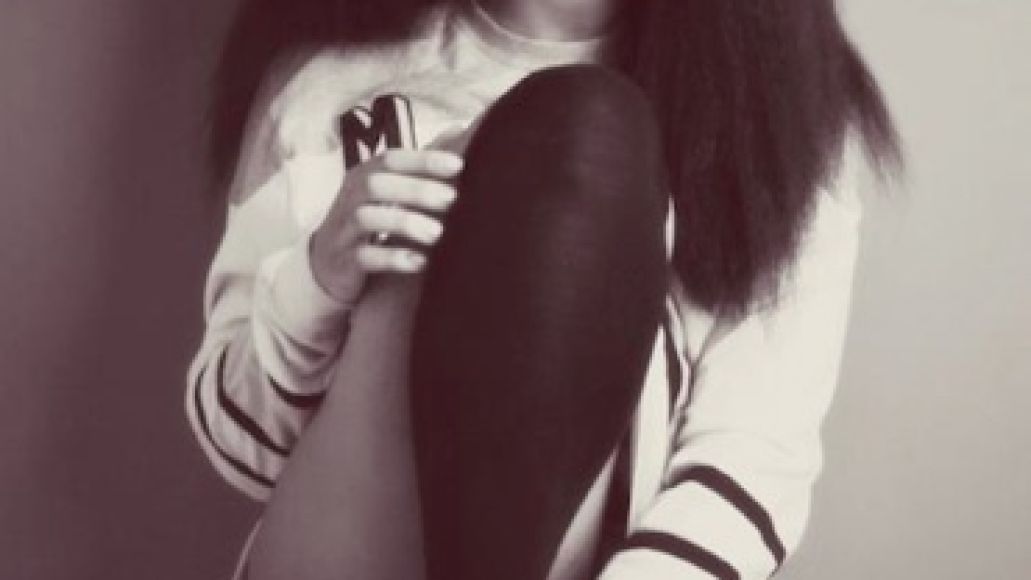 “I have always felt like an awkward adolescent. I never got out of that phase,” admits Rowe. “I definitely think my music is heavily based on frustrations… with myself, and just trying to figure out what the fuck is wrong with everyone in the world, and what’s wrong with me. Why can’t I figure it out? And why can’t everyone figure things out and stop being so weird? It’s like, self-loathing mixed with global frustrations.”

Central to getting to the core of her issues was facing the physical insecurities that plagued her as a teenager. “I used to think that maybe if I wore my hair straighter or my clothes tighter, maybe if I tried foundation, high heels, false eyelashes, or excessive jewelry, I might get a little more play,” she recounts in a serious tone. “It was all these outside, superficial things. It was crazy. But the really fucked up part of it was that I started seeing positive results after changing all these things about myself.”

Having been sucked into the pressures of conformity, her own values and identity ravaged and nearly erased, she found a way to gain control of her life again, or at least restore a little bit of clarity and perspective. “I kind of got lost in the mix of all of that. I think my music is a product of trying to find myself after all that nonsense that I did to myself, mentally, physically, and emotionally.”

To do so, she not only needed to let go of the past, but accept the present in all its media-overloading existence. Her new material, such as the songs found on her S EP, contain as much new SZA as old SZA, the sound of two worlds colliding: a young woman sorting herself out, influenced by the mixed bag of music that she grew up on, as well as the artists she’s recently discovered.

While she describes herself as a creature of habit, like most, she finds music in the digital age to be a slippery slope, sometimes overwhelmed by the steady influx of new acts and records. “I just created a Spotify account the other day,” she says laughing. “I’ll find new things constantly through Björk playlists. I just found a playlist called ‘Sad, rainy day,’ and it is amazing!”

But, Rowe enjoys stumbling across new music, especially since she seems to have a thing for spontaneity and the free-spirited energy that accompanies it. She again mentions jazz, as well as Björk and the way she seems to “speak poetry” so naturally. She also references Animal Collective and their “funky groove and jam-like feel.” The same type of imaginative impulses also guide her own songwriting process. “Songs I’ve written out and planned out, they are so bad,” she admits bashfully. “I would play them for you, but it is too embarrassing.”

Instead of the more calculated approach, a lot of her writing comes from freestyling. But, her brain’s creative machine isn’t simply jump-started by any old thing — her eyes usually do a lot of the initial work. “I’m more inspired by images than I am anything sonic,” she explains, before telling me about the recent deep, cerebral over-thinking session stimulated by Requiem for a Dream and how she’ll literally watch Six Degrees of Separation three times each and every month.

“I get that from Dad. He’s not much of a sports guy, so on Sundays he’ll just put on Star Trek and talk to me about Vulcans, and Spock, and all this crazy nonsense. I think it’s always made me want to think way more than I need to. I’m more…a brain than brawn,” says Rowe, muffling her giggling. Somehow, she’s been able to strike a balance between her free-wheeling creative spirit and that overworked mind, editing excess material down to its best and meatiest cuts. Yet again, it seems to be something inborn. “I’m very particular — certain sounds only go with certain beats and certain lyrics. I have to feel the connection.”

From her genre-defying, R&B-rooted sound and knack for picking fresh, progressive producers, to her loyalty to true artistry, her music has not only turned the heads of her friends, but also the music industry. Over two and a half years ago, Rowe met with Top Dawg Entertainment, the label now home to Lamar, the rest of the Black Hippy crew (Ab-Soul, Jay Rock, ScHoolboy Q), and Isaiah Rashad, purely by chance. The streetwear company she worked for tasked her with bringing the TDE crew some clothes following a Kendrick Lamar show in New York City. It was that night that she met the group’s president, Punch, beginning a friendly correspondence that would eventually turn into something far more career-changing.

For months after that night, Rowe kept in touch with Punch. He’d check in on her from time to time, giving her feedback on material that she’d send his way. Flash forward to 2013, and her signing with TDE earlier in August seems like the result of a series of fortunate events, yet also the work of fate in some way. Even early on in their creative partnership, she already sensed that she had found a place of belonging with the group.

She went on, “I’m a really emotional person, and I’m really sensitive about shit. I think the fact that Punch was so into my lyrics, and into my mind, and what I was actually thinking about, and what drove me — it just made me feel like, ‘Yeah, this is it,'” she says, looking back. “You have people telling you they give a fuck what you’re singing about and they actually want to know more about you, not because of how you look or how you dress. The only thing they ever asked me about was my lyrics.”

TDE’s devotion to music and real artistry is what resonates the most with Rowe, and remains the most important lesson she’s learned from the group thus far. “Nothing is possible without music,” she says warmly. “You can’t even talk to them until your project is finished or your song is complete. They don’t talk about shit that doesn’t matter. It’s just solely about music. Get all your music done, and you better be honest about it, because that’s all you have to represent you.”

Her forthcoming Z EP, the second in a three-piece series, finds SZA exploring more freely than ever, saying it was her “opportunity to make whatever I wanted with whoever I wanted.” Along with longtime collaborator Felix Snow, she’s tapped TDE’s own Dave Free, and Jay Z associate and teenage wunderkind producer Wondagurl. Much like on her previous release, she both expands and breaks the barriers of labels and genres.

“Sonically, each song I truly believe has its own genre. It’s genre-less. It’s kind of literally just me, just a representation and presentation of me amongst incredible production and some vocals that… aren’t that bad,” she says, chuckling aloud at the end of the sentence, a bit of her self-critical personality peaking through.

Constantly working to better understand herself, Z is based on her childhood as seen through the movies and moments that profoundly affected her. From Matilda and its comforting Miss Honey character to a violent documentary about a bloody Arab woman whose house was blown up, it’s about “really, really, really jolting stuff” that’s stuck with Rowe after all these years. Even as she struggles to unscramble her past, she can’t help but use it as the perfect lens through which to see the future.