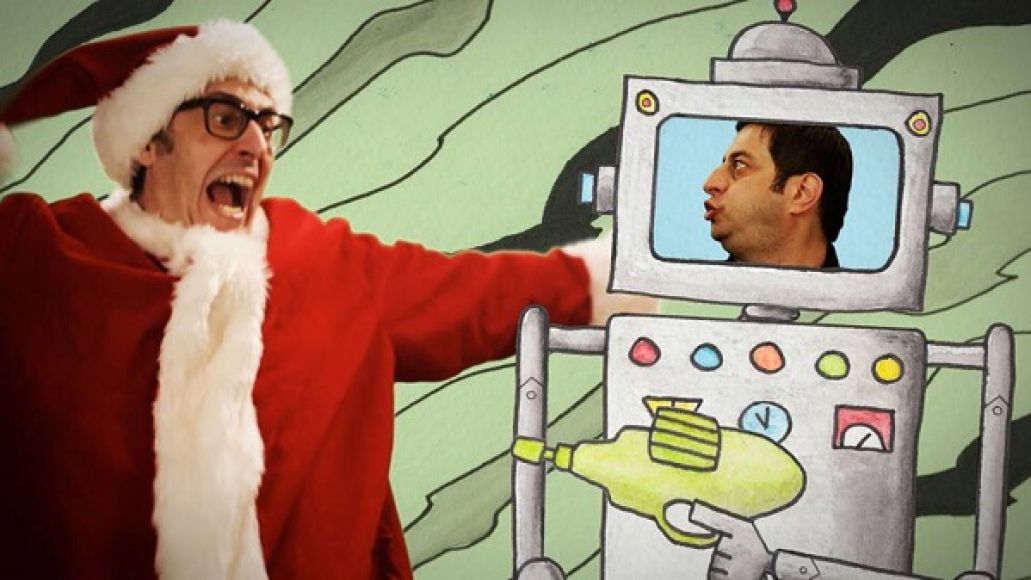 The turkey’s digested, the Record Store Day Black Friday vinyl purchased, and it’s officially Christmas time. (Technically, it’s officially Hanukkah time, but we Jews know where we stand.) As we look towards the yuletide joy, store speakers have already begun to ring with the familiar melodies of classic jingles. There’s always room for new tunes, though, and so Yo La Tengo, NPR’s Ira Glass, and comedian Eugene Mirman have joined forces to deliver their own contribution to the Christmas songbook. With its tale of a holiday holocaust, their track “Toymageddon” gives Weird Al’s “The Night Santa Went Crazy” competition for the most savage holiday song ever.

But in this song, St. Nick’s not the bringer of destruction — his “gifts” are. Yo La Tengo’s Ira Kaplan recounts how while “trees bedecked with ornaments” lit up living rooms, “gifts transmitting coordinates” were launching a plot to take over humanity “in the ultimate war on Christmas.” Glass’ unmistakable voice pops in to detail how humanity fell, explaining that “My Little Ponies were the first to arrive” in the toy takeover. Mirman plays the part of one of the robotic toy overlords, who… well, we won’t spoil that one. They also manage to squeeze in references to both The Matrix and I, Robot, to give you an idea of where this is all heading.

The song comes from the album 2776: A Millennium of American Asskickery from Rob Kutner and The Levinson Brothers. Out July 4th, 2014, the musical/comedy record brings together the likes of Selena Gomez, Ed Helms, Aimee Mann, Aubrey Plaza, Will Forte, Andrew W.K., and others for unexpected collaborations.

“Toymageddon” is now available on iTunes and Amazon, with 100% of proceeds benefiting OneKid OneWorld. Below, check out the video for the song, which features all the song’s talent in a blend of live-action and animation befitting such a whimsical tune.