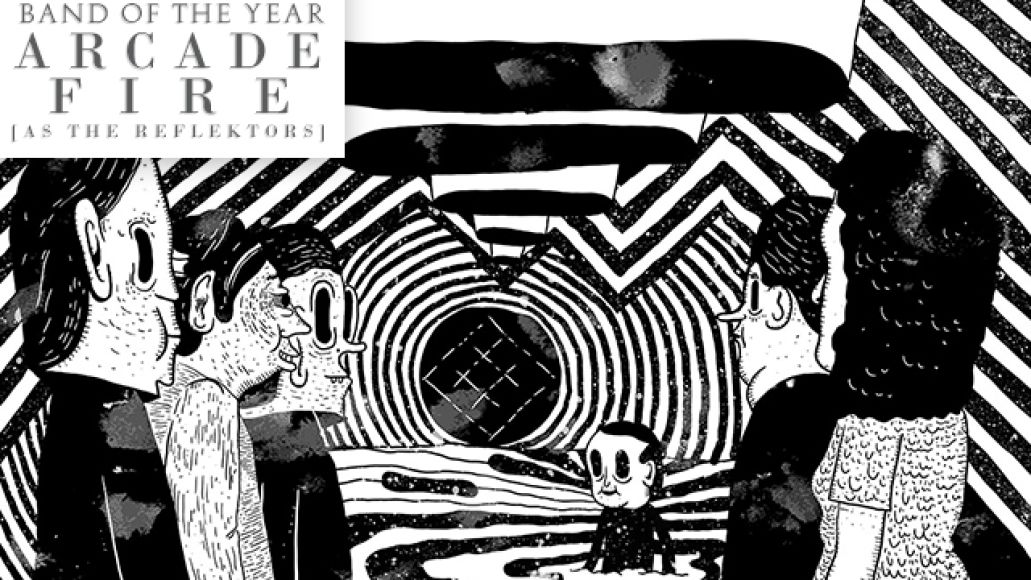 The biggest acts of 2013 remodeled the standard album rollout into a highly engaging blockbuster event, shattering any preconceived notions of hype. Some explored new sounds by collaborating with an eclectic mix of talent. Others took risks to deliver an elegant, challenging, and important record. A handful did both. But only one reached above and beyond.

Arcade Fire, fresh off the heels of The Suburbs, their biggest and grandest record to date, were catapulted into the spotlight after winning the Grammy for Album of the Year in 2011. This was a shock to both the band — a humble bunch of Canada-by-way-of-Texas indie rockers — and to anyone who had been tuning in since their debut, Funeral, which was 2004’s bittersweet ode to childhood nostalgia and loss. This spotlight created a divergence, because not only was Arcade Fire receiving a well-deserved nod of approval from the music industry as a whole, but they also were branding themselves — whether intentionally or not —  with the dreaded scarlet M of mainstream success. 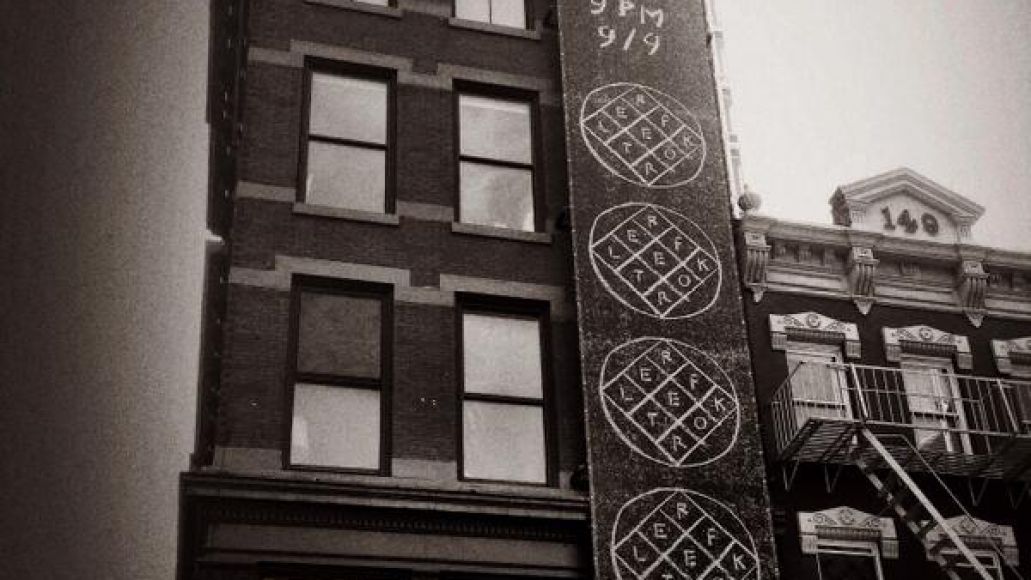 To borrow from Tennyson’s poetic account of the Crimean War, the band saw cannons to the right of them, cannons to the left of them, and cannons from the underground! But rather than wallow as targets for an inevitable volley of thunderous criticism, the band danced skyward in a completely new direction, surprising many in its swelling base of fans and turncoat army of detractors when it finally landed in Haiti.

All at once, a mysterious logo appeared. It was painted on walls, drawn in chalk along sidewalks, and etched into the dirt. No one could explain the vexing astral symbols that were spreading around towns like coded markers. This symbol bore the semi-nonsense word “REFLEKTOR.” And it was crafted in a style reminiscent of old Veve drawings, which practitioners of Haitian Vodou have been using for generations as beacons for the spirit world. Rather than tossing out a viral video or makeshift Twitter campaign, Arcade Fire borrowed a trick from Krusty the Clown’s infamous TV rival Gabbo; they laid down bricks of confusion, curiosity, and wonder that soon paved a glorious road toward the record’s release.

The Arcade Fire rumor mill had been steadily churning, especially after a Rolling Stone interview with LCD Soundsystem ringleader James Murphy, who revealed that he lent his production skills to some new recordings with the band. And the cryptic symbols — which found their way online like ghosts in the machine — hinted at a big reveal in early September. This date also marked the start of a collaborative push with a number of artists, some in the field of music, as well as some who were not.

Anton Corbjin, the Dutch photographer and acclaimed director behind such memorable music videos as U2’s “One” and Nirvana’s “Heart Shaped Box”, came on board to helm the group’s premiere of the titular single, “Reflektor”. And it didn’t disappoint. The seven-minute song was vibrant, moody, and laid down a dance hall beat that would be comfortable in any beach-side shack selling jerk chicken. The video was also the first in a string of appearances by the band decked out in giant plaster caricature masks.

As if this surprise release wasn’t enough, a second interactive video went up online the same day, meaning the “Reflektor” single was so big that it landed two music videos. Vincent Morisset, the Montreal-based, “web-friendly” director who had previously created a video for “Sprawl II (Mountains Beyond Mountains)”, generated an interactive experience, which utilized webcams to place the viewer’s image inside the video. The fans got a chance to boogie within mirrors that lined streets of Jacmel, Haiti. The excitement was palpable.

Following a momentous Saturday Night Live appearance, Arcade Fire released Here Comes the Night, a 22-minute short film and concert piece directed by Roman Coppola, himself part of a royal dynasty of American filmmakers. The project added a lighthearted authenticity to the band’s alter ego, The Reflektors, which harked back to the Sgt. Pepper days of the ’60s. Taking a page from the start of The Beatles’ national tour, The Reflektors performed in a tiny club that may as well have been a run-down, cocaine-addled suite within Studio 54.

Between songs, the band was waited on by a service staff that featured some of the biggest names in comedy. There were appearances by Zach Galifianakis, James Franco, Aziz Ansari, and Eric Wareheim. Ben Stiller, Bill Hader, Rainn Wilson, and even Michael Cera showed up, not to mention a somewhat inexplicable appearance by Bono. But Here Comes the Night wasn’t just a silly party of music set to loose sketches. The band seized the moment, debuting a handful of songs they had meticulously pieced together over the past year in a Jamaican castle turned recording studio.

Rather than serve up more of the same, Arcade Fire decided to experiment with a sound that was equal parts disco, dance, rock, and Bruce Springsteen’s E Street Band. It was a calculated risk sure to drive off those who wouldn’t tolerate change or who threw their noses in the air at the mere whiff of selling out. But, this mutation was crucial. The absence of change brings about stagnation, which ultimately leads to death. Not to ruin the ending, but the band didn’t die. They succeeded — even thrived — across a double album that dances like nobody’s watching.

The triumphant “Joan of Arc” marches along like a victory lap, celebrated with a shimmering confetti rain of Régine Chassagne’s vocals and French asides, a language spoken both in her native Montreal and in her parents’ first home, Haiti. Though some fans likely found the Haitian influence on Reflektor a shock, Chassagne’s Haitian heritage has always influenced the band’s music and identity in some fashion or another, even from the start (see the song title “Haiti” off their debut record). They have also shown a longtime charitable involvement with the country.

The Caribbean influence of “Flashbulb Eyes” finds frontman Win Butler addressing his anxieties over the group’s newfound fame. The raucous “Normal Person” roars with sociological outrage, while “Porno” delivers a soft foray into electronic ambiance that would make Brian Eno proud. This festive atmosphere is enhanced by the phenomenal multi-reed musicianship of Colin Stetson, as well as the orchestral talents of Owen Pallett. But the biggest get, by a long shot, was snagging some studio time with Mr. Space Oddity himself, David Bowie, whose vocals on Reflektor and blessing of the album shine with his signature flair, ease, and sophistication.

Of course, any change sparks opposition, sometimes even fear, and the Arcade Fire were privy to plenty of it. While the likes of St. Vincent, Stephen Colbert, and pretty much all of Europe were hip to their art school tomfoolery, a vocal minority expressed disinterest in joining the mariachi band when tickets simply asked to “please wear formal attire or costume.”  Slate called it a “misguided attempt by a big band to retain some vestige of their erstwhile smallness.” If anything, the idea was more of an attempt by a big band to shirk away from their “erstwhile smallness,” and instead create a movement. 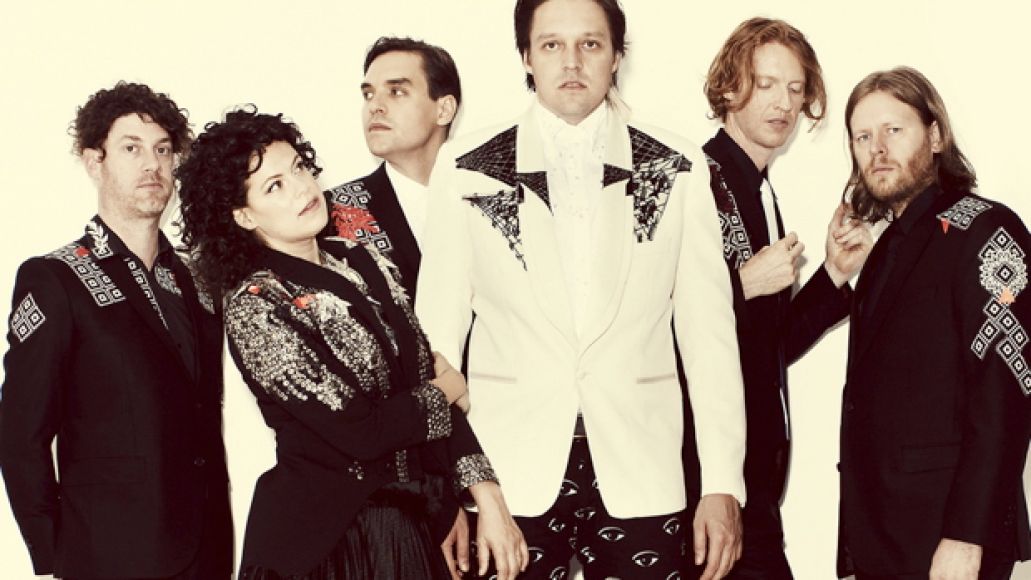 When was the last time a rock band actually challenged its mainstream audiences? As Greg Kot and Jim DeRogatis pointed out in their review of Reflektor on Sound Opinions, Arcade Fire may be the most important band since Nirvana with regards to breaking through to the masses, and while their style’s arguable — hey, not everyone wants to wear a leopard-print bag over their head — their scope remains just as impressive. Why scoff when they’re simply asking their fans to hold the paint brush, too? That’s more of a rhetorical question, but sit on it the next time you spin Reflektor. That is, if you were one of the several hundred thousand that made it No. 1.

Creativity comes at a high cost, though Arcade Fire never broke the bank. Like the mighty Colossus of Rhodes, they stood over divided, uneven terrain that tugged in either direction. One foot was firmly planted in the past, situated next to years of rotation on college rock stations, cultish devotion, and a discography of three records that had only ever been released through an independent record labels. The other foot stood atop heaps of mainstream praise, a Grammy award, and friendships with the right sort of industry people. But, unlike the rigid statue of Colossus, who plummeted down upon the city that once praised him, Arcade Fire chose to move upward toward new artistic horizons, musical sojourns, and whimsical forays into the unknown.

Band of the Year: Arcade Fire