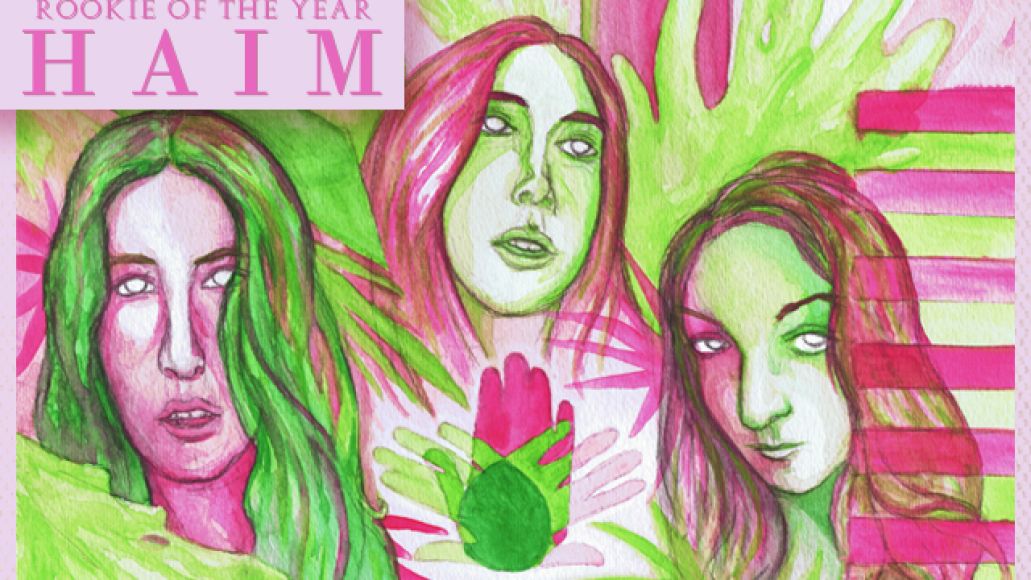 Este Haim’s pissed. For the second year in a row, she’s been out of the country for Thanksgiving, and that’s just something that doesn’t sit well in her stomach.

“Thanksgiving, for us, is bigger than Yom Kippur,” she contends. “It’s a family tradition that we all make Thanksgiving dinner together — like my mom makes the turkey, my aunt makes the mashed potatoes, my other aunt makes the yams with the marshmallows. So, I think we all collectively made a promise that next year we will be in the states. Because three in a row might be suicide.”

Currently, Este and her two sisters are holed up in a London hotel, where they’re waiting to perform at a holiday party for their label. Strictly HAIM material, though, as Este notes, “the only holiday song we’ve ever done is ‘The Chanukah Song’ by Adam Sandler.” After this, they’ll head to Paris to carry out the latest chapter in what’s become their never-ending tour. Still, they’re embracing the scenery.

“We’ve been taking many a Segway tour,” Este admits. “That’s kind of our thing. It’s like the CliffsNotes of cities. You kind of get what you need, and you’re on a fucking Segway, which is just pretty epic. And then everything else you want to see, you can do at your leisure.” 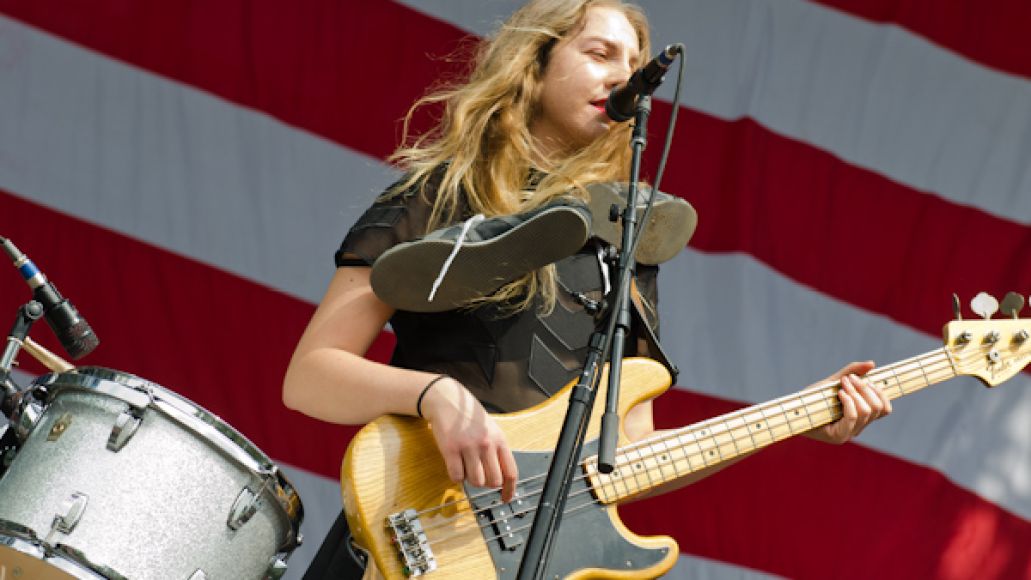 Leisure isn’t something that really factors into HAIM’s lifestyle. This year alone they’ve appeared at nearly every major festival, from Bonnaroo to Glastonbury, Lollapalooza to Austin City Limits; toured with the likes of Mumford and Sons, Vampire Weekend, and Phoenix; performed on The Late Show with David Letterman; and entertained millions on Saturday Night Live. Busy times, indeed.

“SNL hasn’t even sunk in yet,” Alana says. “I think it will sink in five years from now.” The youngest Haim sister laughs while discussing several GIFs she’s seen pop up on the Internet, most focusing on her face from the ’80s-inspired sketch she appeared in. “My face in the skit, I’m just so happy. I’m not even trying at all to play it cool. I’m just overjoyed. I would even say I was jubilant. I was like, Oh my God, I’m the biggest dork. And I’m never going to get married because I am the biggest dork ever and no one is going to think I’m cool.”

“I probably never will, unless somebody forces me to watch it,” she adds. “SNL is just a different thing. It’s its own trophy. We never thought we were going to play SNL ever in our lives. When we got it, it was like, ‘What the fuck? Someone up there is killin’ it for us because this is just too much.'”

Perhaps it’s the critics. After topping the BBC’s Sound of 2013 poll in January, the three nabbed the inaugural Grulke Award for best Developing US Act two months later at Austin’s highly competitive South by Southwest. Mind you, this was without a proper debut album, which would finally surface six months later as Days Are Gone. This wasn’t their original plan. 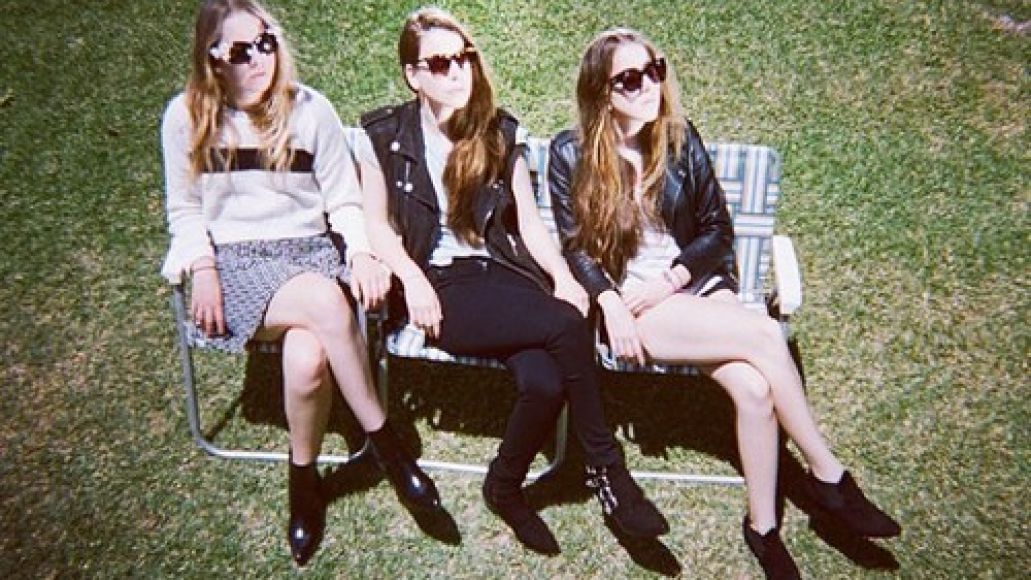 “We booked most of the festivals in the summer thinking that the album was going to be out,” Danielle explains. “That’s kind of a good way to get your music out there. They see you live and they buy the record, but that wasn’t the case for us. We weren’t going to hand in something that wasn’t ready.”

Whereas Este and Alana soak up the sunlight, Danielle tends to the shade, and it’s a good fit. As the band’s main vocalist and lead guitarist, the middle sibling’s darker edge adds a certain mystique to their stage show, their music, and their work. Of course, all three members are equally serious about their work.

“We’re very, very involved with every single little aspect of everything,” Danielle adds. “We have to be present for every single thing—for every part of the mixing.”

It’s a bond that’s both universal and alien. Everyone loves and hates their siblings, but with Haim, it’s nothing but love. Even after spending almost the entire year bound to each other, they’ve yet to tire from one another’s company. I share a quick anecdote about my fiance and her sister and how they can’t go five minutes without stormy weather. They can’t relate.

“Just from growing up, I think you can decipher when’s a good time to talk about something serious and when you shouldn’t bring up something,” Danielle explains. “That’s what’s nice about being family, and when we’re traveling and always being together. We’ve done it our whole lives; we’ve always been a close family.

“We have similar tastes, but we also have our different vibes, and I think that’s also good when we’re trying to make decisions and stuff. If one person doesn’t think it’s cool, we talk about it. We’re not like the Oasis brothers, you know, getting drunk and trashing rooms, and punching—I don’t even know what they did. I just know they didn’t get along.”

This might be one instance where we can actually blame the parents. Growing up, the three performed alongside their father, Mordechai, and mother, Donna, in their family cover band, Rockinhaim. As Alana tells me, “If you would’ve seen me when I was 13, I was so terrified to play onstage—not stage fright, but I would forget my part, and look at my hands, and make sure I was playing the right part. My parents would be like, ‘Are you breathing?’ And they would make fun of me because I would just not move and be so scared.” 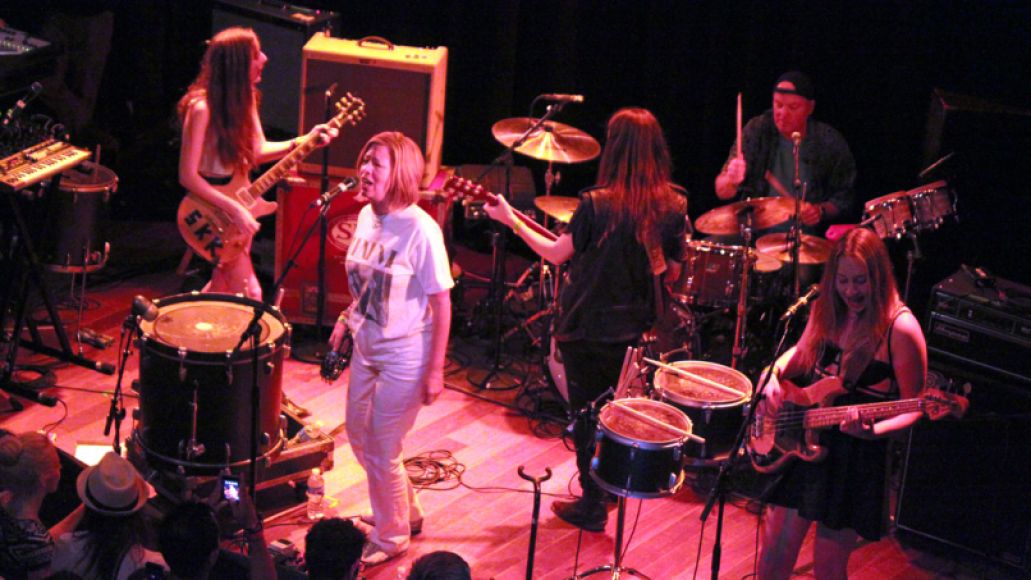 Back in August, during HAIM’s Lollapalooza after-party at Chicago’s Lincoln Hall, the five reunited for a performance of “Mustang Sally”. Smiles galore, the family proved real and authentic in a way that only seemed possible on shows by Sherwood Schwartz or Bernard Slade. Enthralled, I approached the two parents shortly after to congratulate them on their children’s success, to which the mother innocently asked, “Do you like their band?” The story writes itself.

“They don’t make ‘em like my mom anymore,” Este says when I tell her this. “I really think my mom might be an angel on Earth. The fact that she raised three of us, three crazy bitches in Los Angeles, and we came out relatively normal is kind of a feat in and of itself. So I’ve got to give them props.”

No doubt the feeling’s mutual. After all, their daughters are currently changing the genre of indie rock, as some have argued, and contributing to one of the most influential movements by women in music. This year, they’ve shared stages, lineups, headlines, awards, and op-editorials alongside other critically acclaimed acts like CHVRCHES, Angel Haze, Savages, Speedy Ortiz, et al. 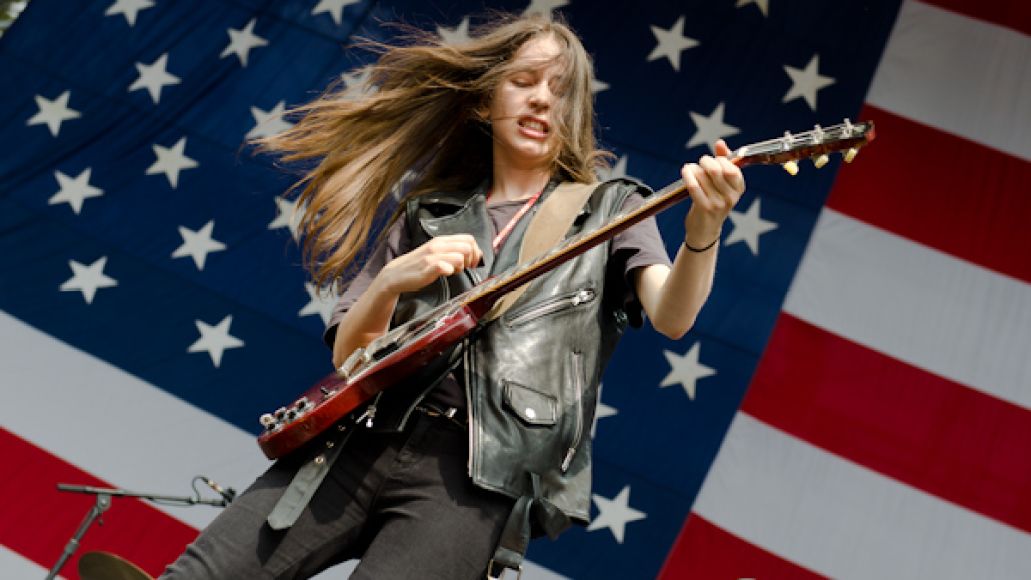 It’s a collective that’s received plenty of attention, both positive and negative, and raised several questions on misogyny and objectification, something CHVRCHES frontwoman Lauren Mayberry addressed this past September with her highly confessional op-editorial for The Guardian. I ask them if this is something they take into consideration.

“We kind of felt it at the BBC Sound Poll about a year ago,” Danielle says. “All of the top five were women-fronted, so we kind of felt that, and it’s awesome. I love Lauren’s voice and the articles that she writes and what she stands for is really inspiring. There definitely is inequality, and I think people like Grimes and Lauren just bring light to what women have to go through. But I don’t really like to harp on it, not really my bag.”

What’s remarkable is how all of the aforementioned acts are scattered across the world, and how the Internet has, in effect, fostered this “scene,” for lack of a better word.

“I think the first time we talked to Grimes was through Twitter,” Danielle continues, “and we like to tweet back to each other. Also with Angel Haze, there are a bunch of people we’ve connected with through social media and then met them later. And it’s like, ‘Oh hey!’ It’s kind of an understanding of we’re all friends with each other, we’re all fans of each other, let’s hang kind of a thing.” 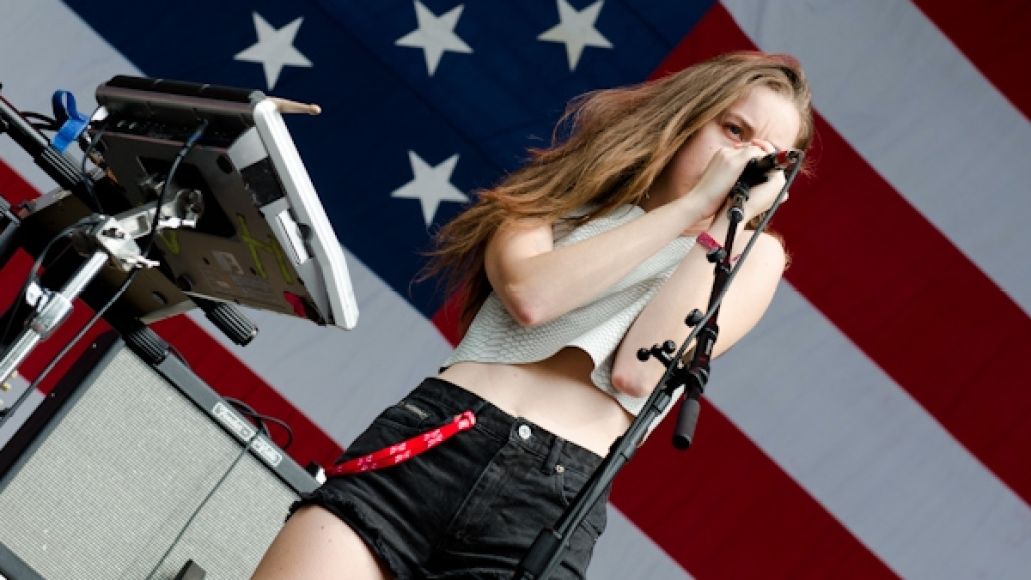 The world’s at their fingertips, literally and metaphorically, and that’s something they’re still soaking in. When I ask Alana if she remembers The Moment, the time where all of their success became obvious and clear, she singles out their performance on the Pyramid Stage at this past summer’s Glastonbury Festival.

“I don’t think I looked at the crowd once for the first three songs,” she admits. “I had never seen that many people before. And that was the one moment where I was like, ‘Holy shit, we used to only play to three people, and now we’re playing to a sea of people, and none of these people are my family.” She laughs, pauses, and adds: “It just doesn’t seem real. It still doesn’t seem real.”

When will it ever?

Rookie of the Year: HAIM