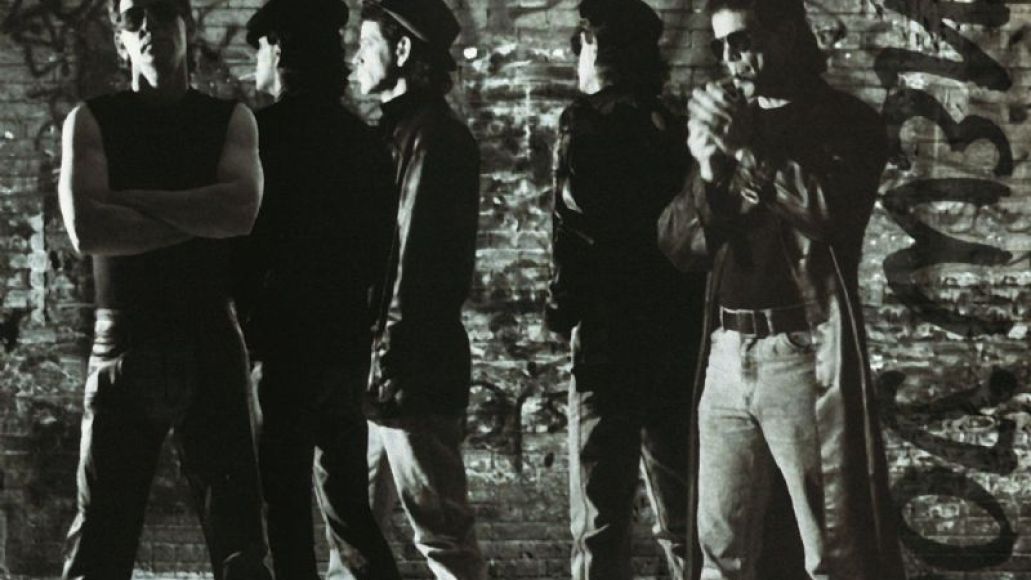 For this edition of Dusting ‘Em Off, Senior Staff Writer Len Comaratta and staff writer Henry Hauser revisit New York, Lou Reed’s 15th studio album, which turned 25 years old this week. To celebrate, Len and Henry take a textual trip back in time when the Big Apple wasn’t as safe and clean and travel-friendly as it is today.

Henry Hauser (HH): These days, New York City feels like Disneyland for the 1%. Crime is at a 50-year low, decrepit warehouses have been succeeded by trendy lofts, and chic cocktails cost upwards of $15. But back in the ‘80s, the Big Apple was a starkly different place. The crack epidemic was ravaging poor communities, violent crime was a constant threat, and the wealthy were fleeing for the suburbs. Lou Reed’s ‘89 concept album, New York, paints a vivid picture of this pre-Giuliani Gotham inundated with grime, crime, and corruption. But despite NYC’s maladies, Reed manages to highlight some stunning glimmers of love and hope.

A return to form following the disappointing Mistrial, Lou Reed’s 15th came with insightful social commentary wrapped around impeccable lyrics. It doesn’t get any better than opening rocker “Romeo Had Juliette”, a tale of ephemeral young love amidst crack dealers “dreaming of an Uzi someone had just scored.” As the song unfolds, Reed leaves little doubt that NYC is headed for an ugly demise: “Manhattan’s sinking like a rock/ Into the filthy Hudson, what a shock.” So, Len, what’re your thoughts on Reed’s grimy, dangerous Gotham?

Len Comaratta (LC): Well, let’s face it. New York has always been like “Disneyland for the 1%”. The Upper East Side has housed the city’s (and nation’s) richest for well over a century, sheltering them within a colony of privilege away from the sleaze and slime, the drugs and crime, the poor and homeless. It’s those elements, essentially the seedy reality of their beautiful city, that Reed describes with such succinct poignancy on this album that it can make a Nebraskan empathize with a New Yorker.

Of course, today New York is a slightly different place after the cleanup in the ’90s (which was started by Giuliani’s predecessor, David Dinkins). Just look at the Lower East Side, for example, where Reed and fellow VU bandmate John Cale used to live. Traditionally an area of immigrants and blue-collar working class, the area’s extreme gentrification would probably make it almost unrecognizable today. I haven’t listened to New York since it came out and “Dirty Blvd.” was all over the radio and MTV, and to be honest, at the time, I didn’t really give it a second thought. But listening to this album today, what blows me away isn’t how beautifully Reed captures New York, or even the stark contrast of New York then with New York now, but rather that all of these songs reflect today the same messages they did 25+ years ago, only this time against the national backdrop. 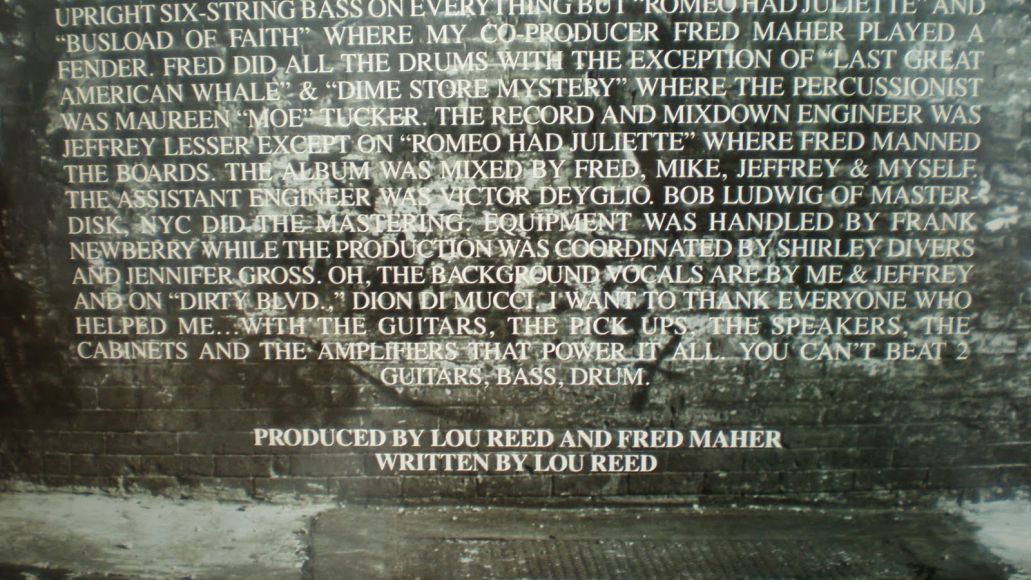 Reed’s messages of corruption, scandal, rich vs. poor, drugs and disease, perhaps ring louder and truer today than when he first penned them. Though some of the players are different in 2013, meth instead of crack for example, the characters he name checks, like the NRA, “the President,” and the Pontiff, stand front and center in many of today’s debates, while others like TV loudmouth Morton Downey have simply given way to other blowhards such as Glenn Beck, Rush Limbaugh, and Alex Jones. Though, with New York, Reed was most assuredly focused on New York as a concept, it also reveals him to be an artist with his thumb on the pulse and one eye on the bigger picture.

HH: I think you’re absolutely right; Reed’s critical gaze is focused on the big picture. “Dirty Blvd.” contrasts the haves and have-nots, as Reed pairs flashy movie stars with “TV whores calling the cops out for a suck.” The song’s piteous protagonist, battered by his abusive father and gouged by a profiteering slumlord, yearns to escape the furnace of his daily life. Alongside Dion’s soulful backup vocals and peppy guitar licks, the singer cries out, “I want to fly-fly-fly-fly from the Dirty Boulevard!” Censuring both litterbugs and sadists, meandering folk ditty “Great American Whale” has Reed decrying environmental degradation (“They’ll shit in a river, dump battery acid in a stream”) and America’s devaluation of human life (“not worth more than infected yeast”).

Though Reed takes aim at dozens of maladies and villains, sleazy politicians get the lion’s share of his wry scorn. Corrupt public officials appear in “Sick of You”, “Straw Man” (choice line: “Does anyone need yet another politician?/ Caught with his pants down and money sticking in his hole”), and “There Is No Time”. In the latter, Reed dismisses the rhetoric of Jesse Jackson as hollow, self-congratulatory, and opportunistic (“This is no time for private gain”). Reed targets Reverend Jackson again on “Good Evening Mr. Waldheim”, calling out the former Presidential candidate for his ties to the controversial Head of the Nation of Islam, Minister Farrakhan. 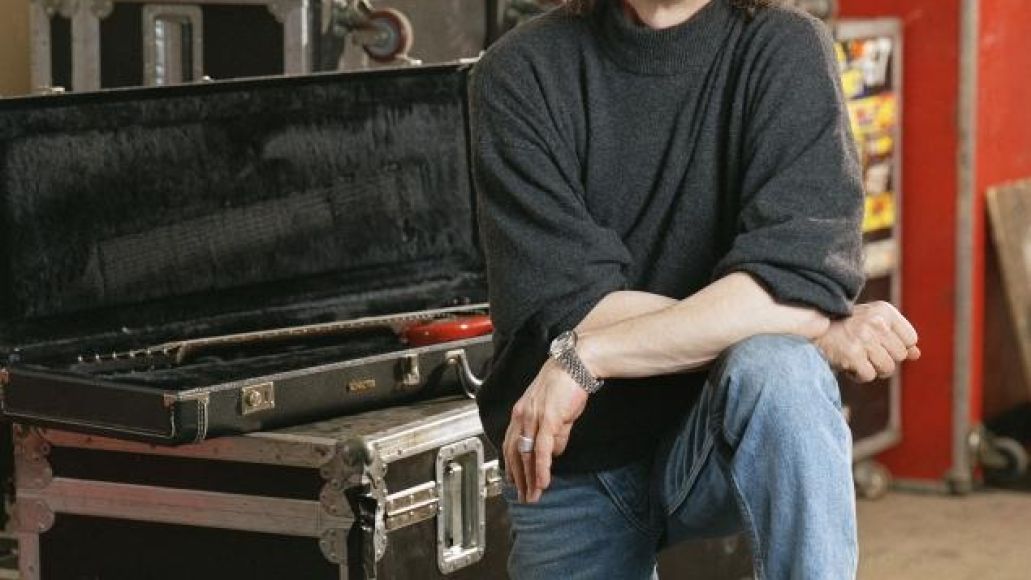 LC: I think you nailed it. Reed doesn’t shy from much on this album; no topic was off limits, but especially ones we tend to want to ignore or pretend don’t exist. To me, though, it is exactly what you said there at the end, his calling out of various public officials and pseudo-celebs. Whether it was an abuse of office or lacking any accountability for their actions, Reed took them to task. To Reed, honesty and integrity weren’t a choice, especially if you were somebody in a position of authority. In a way, much of this music is protest music; an inner-city Woody Guthrie for the then digital age. Imagine the level of vitriol if the creation of New York was coupled with today’s issues of war, scandal, fraud, corruption, and political and ideological division.

When this album came out, I was in high school. At the time, I didn’t really get into his style of singing; I thought it came off as just talking over music. Re-listening to New York now, 25 years later, I obviously have a far greater appreciation for Reed and his particular style. His blend of metaphors and easy-going delivery let him deliver his message without ever coming off as condescending or preachy. He isn’t singing so much as storytelling. With this album in particular, these stories aren’t merely tales; they’re meant to be a mirror for us to reflect. Reed is holding it up and saying, “Look, this is what is real. What are you going to do about it?”

HH: There are definitely shades of Woody Guthrie (not to mention early ‘60s Bob Dylan) in New York. Reed’s social protest chops are at their peak; he deftly exposes liars and posers with a keen wit and scathing lounge. Take somber, down-tempo “Halloween Parade”, which has Reed presenting a procession of “born again losers…lavender boozers” and “Tinkerbelle in tights.” Seeing his hometown devolve into a glorified masquerade ball where faces are obscured and phony identities are constantly tweaked, Reed decries a lack of authenticity.

In terms of songwriting, though, this isn’t Reed’s strongest effort; the music and lyrics don’t interact with any real synergy. While both are independently excellent, together they fail to achieve the cohesion of Transformer tracks like “Satellite of Love” and “Walk on the Wild Side”. Still, the jazzy guitar on “Great Adventure” and finger picking twang of “Busload of Faith” are highlights. Broaching a wide array of issues, ranging from the hole in the ozone layer (“Sick of You)” to human rights and bigotry (“Hold On”), Reed covers a ton of ground. Mafia lawyers, Rudi Giuliani, and a boy named Buddha all make cameos, as he sings atop jaunty electric guitar riffs reminiscent of early rock ‘n’ roll. Channeling Tom Wolfe’s The Bonfire of the Vanities, Reed exposes the hypocrisy, inequality, and moral dissonance of the Big Apple at the close of the ‘80’s.

LC: I’m glad you mentioned “Satellite of Love”. I was just thinking that after thoroughly listening to New York, I’ve come to enjoy much of the music on this album almost as equally as I enjoy classic Reed tracks like “Satellite” and “Perfect Day”. That, of course, is not to say that these songs are as equally crafted or representative of his strongest work. I agree with you that these songs, though well written and well delivered, shine for other reasons. A case of the right place at the right time, these songs tapped into a specific vein and hit with such a punch that if you were paying attention to his lyrics (which, at the time, I admittedly was not), you couldn’t help but be affected.