Matthew Houck has come a long way. From his early days as a bedroom folk-country crooner to the mariachi-clad rock n’ roll front man who now takes the stage in support of 2013’s stellar Muchacho, it’s been an unlikely journey. And if last night’s sold out show at DC’s 930 club is any indication—which, let’s be honest, it is—Phosphorescent has finally broken through. At present, Houck’s chameleonic songs of lovelorn hesitance sound like they were always destined for the big stage.

Houck emerged a physical representation of the genre-bending music he champions. Surrounded by tinsel, flowers, and candlelight, Houck sported glitter-covered Chelsea boots, a white-sparkly greca jacket and pants, an ornamental cowboy hat, and a childish grin. It was disco; it was country; it was truck-stop; it was Cinco de Mayo. Yes, it was showy. But the glitz never overshadowed the down-home spirit of the evening. Houck was quick to reveal his earnest excitement for performing at the club, and his pure enthusiasm for each of his songs. It was almost immediately clear that Houck, his band, and the tightly packed crowd were all excited to be there.

For about 90 minutes, Houck and his sturdy backing band walked us through highlights from the entire Phosphorescent discography; a muddy haze of woozy honky-tonk ballads, disco-infected alt-country jams, and anthemic, post-everything rock explosions. 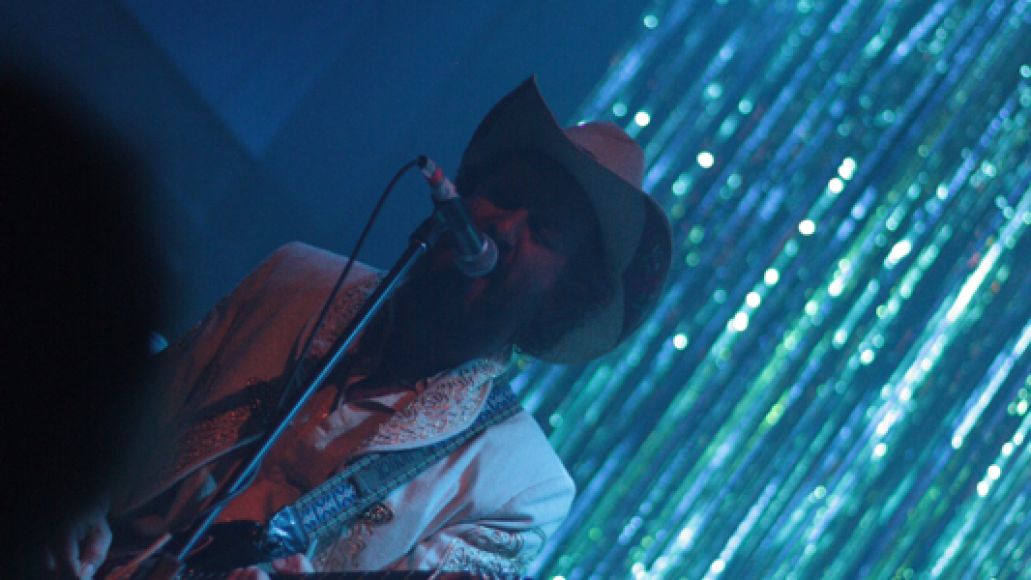 The rollicking “The Quotidian Beast” kicked things off with the healthy balance of late-night/early-morning bar-rock and half-awake country swoon, like The Band on some sort of bender. The lyrically pathetic “Tell Me Baby Have You Had Enough” was about as straight-up Outlaw Country as Phosphorescent gets; a whiskey-soaked song of self-sabotage. Alternatively, the encore-ending “At Death, A Proclamation” was a never-ending ascent into post-rock-meets-country chaos, refusing to let up as it overstepped its summit. The energy was palpable.

“Song For Zula”, was expectedly lush and vital, Houck wincing with each pained yelp; orating with hand gestures as he denounced love as the “caging thing” it so often can be. It was a crowning moment, cementing that song’s place in the current musical zeitgeist—a tune as utterly inventive as it is gorgeous. Houck’s cracking voice drifted along a sea of coked-out, synthesized strings and delay-laden drum samples.

But, it was the heart-wrenching “Muchacho’s Theme,” which Houck performed solo, that most purely highlighted his wholly idiosyncratic songwriting approach. Houck performed the relatively simple tune like anyone would a solo piano ballad; seated on a piano bench in front of a set of keys. Except, instead of playing unadulterated piano notes, he banged the melody out on warped, delayed, and murky synthesizer tones; sans attack, sans decay. Thus, the song’s country-twang vocals and honky-tonk swoon were effectively fed through a New Wave, drug-bruised hangover. It was something so seemingly familiar, yet wholly disorienting: a sad and simple ballad, backed by some of the strangest musical noises that can possibly be created by a machine. It sounded like absolutely nothing else.

Setlist:
(Intro) Sun, Arise!
The Quotidian Beast
Terror in the Canyons
A New Anhedonia
A Picture of Our Torn Up Praise
Tell Me Baby (Have You Had Enough)
Nothing Was Stolen (Love Me Foolishly)
Song For Zula
Ride On / Right On
Solo:
Muchacho’s Tune
Cocaine Lights
My Dove, My Lamb
Wolves
Encore (w/ Band):
Joe Tex, These Taming Blues
At Death, A Proclaimation