New York indie vets +/- (or, Plus/Minus) will release their first album in over five years, Jumping the Tracks, on February 4th via Teenbeat Records. In anticipation, it’s streaming in full below.

The follow-up to 2008′s Xs On Your Eyes was produced by the band and longtime friend Steve Choo (School of Seven Bells, The Pains of Being Pure At Heart) at the Sun Moon Star and My Active Driveway studios in New York. Over the course of 12 tracks, the trio accomplishes two primary goals: continuing to refine and heighten their blend of light and airy math-pop (“The Space Between Us”, “Rewrite The Story”) while exploring a new series of soundscapes (the post-rock of “Young Once”, the fuzzy dream-pop ballad “Running The Distance”). But no matter their respective influences, the songs are as brutally honest and as densely structured as ever. 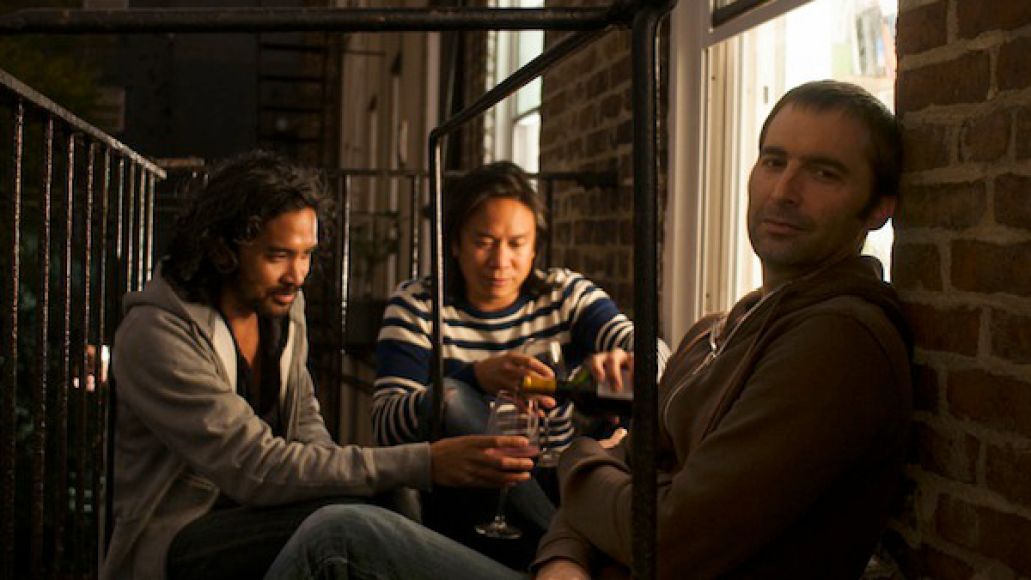 Consequence of Sound also caught up with the band to talk about returning after half a decade, their new approach to recording, the album’s emotional narrative, and much more. Check out the full Q&A below.

What’s it like returning after, essentially, five years away (at least from releasing LPs). How has the industry or the way people approach life as a band changed in a way that’s remarkable to you?

James Baluyut (JB): It’s strange to be releasing an LP at this point because the whole landscape seems to have changed. Music has been moving away from physical media for a while now. But the rise of streaming music libraries – Spotify, Rhapsody etc – really alters the marketplace. Many people I know, they just don’t buy albums at all anymore. It’s strange to think that someone might listen to our record 200 times and never own a copy.

Similarly, what about your particular configuration as a group has changed? Does it feel like the cliche of riding a bike? Or has there been some adjustments getting back in the groove?

JB: Our group still consists of the same three members we’ve had for pretty much the entirety of our career. We’ve grown accustomed to each other. And we never stopped riding the bike. We’ve been getting together a couple times a week for the past 5 years – With one gleaming gem of an album to show for it!

What was recording like after all this time? Was there a shift in your general process, or were steps and the like ironed out years ago? Any sort of noteworthy tales from the sessions that maybe highlight what it’s like for you now working together?

JB: This album was different in that our friend, Steve, built a studio from the ground up and invited us to be a part of it. He put up the walls, finished the floors, and we filled it with all of our equipment collectively. We had a top notch recording facility… pretty much to ourselves for 5 years. Just an incredible opportunity. And quite a luxury as well. But our process, it was basically just, let’s get together a couple times a week and try to write and record songs. We’re constantly changing the arrangements… tinkering with the instrumentation. It’s pretty fun. We used to have a mish mash of processes – sometimes one person would write a part… sometimes one person would come in with a whole song demoed… but for this one, we all sat in a room and wrote music. We drank a bit along the way as well.

Patrick Ramos (PR): With no real deadline for the album and a private studio, we tried a lot of ideas in the studio that we normally wouldn’t be able to entertain. And songs were born out a lot of different ideas other than just jamming in a room. Among others, some started with beats that Chris would record alone and then James and I would build on that, others started on the guitar only to be replaced and deconstructed with other instrumentation, some were recorded on the spot with no set arrangement just to see where it would go. Basically, if anyone had an idea, we’d try it. Being able to flesh out songs by throwing every idea at them is a great luxury. Then again, we don’t want the next album to take five years.

4) The first single, “Young Once”, felt like a slight departure from some of the more “light” indie-pop you’re known for. Was there an idea of a sound or an inspiration going into the album, some kind of road map of how you wanted to be? Or are any deviations the result of time, or personal changes, or the like?

JB: Well, we started off thinking that this might be a dance record. I think only one of those songs made it here… but it seemed like it’d be fun. Instead the record took a bit of a dark turn. I think that just happened organically. There was no plan… we just followed our instincts. We really just concentrated on making an album where we’d have no regrets about any of the decisions in the end.

JB: 5 years is a long time! A lot has happened to all of us. The most significant is probably that we’re all fathers now and life has become quite a bit more challenging. Time is short. Energy is low. It really brings out different sides of you. Writing and performing music becomes an escape… A venue for expression and catharsis.

6) Can you talk briefly about the idea to release multi-track drum recordings? There’s a press release about it, but I’m wondering if someone can speak more about the whole collaborative nature and the component of the unknown. Do you think bands have to have that extra hook to make their LP more memorable and a viable purchasing option?

Chris Deaner (CD): A couple questions there. I don’t think that bands need any extra hook to make their LP more memorable. The LP should, and usually does, make itself memorable. No amount of peripheral stuff will add to or take away from that in a significant manner. However, I do think artists generally like to stretch, and come up with new creative ways of, well, creating. For me technology is just starting to get to the point where possibilities are REALLY opening up, due to the significant increases in bandwidth for the average individual. I was talking with my friend Alex Kolundzija, the founder of Blend.io, and he asked me +/- { plus/minus } would be interested in collaborating with Blend.io. Releasing drum only tracks has always been an idea of ours, we even thought about releasing a CD of drums only for You Are Here, but to be able to release all the stems was such a great opportunity. For me, the interest was mostly about what could people come up with given a well-recorded drum session with all the tracks. Would anyone do it? Would someone eventually make money off of it? How vibrant is the community? Will it be growing? I hope the answer is ‘yes’ to all those questions.

JB: I hope it’ll be a great way to engage creative people out there. I’m really excited to hear what comes back.

7) Is there a kind of arc, be it personal or some kind of narrative, found within the album? Is there maybe a song, one that’s maybe the band’s favorite, that helps to speak or inform that whole thread?

JB: Hmm… I’m not sure there’s an overarching theme for the record… I think for me, “The Space Between Us” sums things up. It’s a bit of a melancholy one – but uplifting at the same time.

8) If someone could only give the LP one listen, what’s the one thing or idea or concept you’d hope they’d be able to pull from it?