Editor’s Notes: St. Vincent’s eponymous fourth album turned seven years old this week. For many, this was the album where Annie Clark stepped out of the indie world and into the mainstream limelight. To celebrate one of our favorite records of 2014, we revisit Philip Cosores’ classic album review, which originally published on February 24th of that year.

St. Vincent has long been a big deal to a small population. Her last solo album, 2011’s Strange Mercy, was heralded album of the year by numerous publications, including this one, and yet at Coachella 2012, she was still stuck inside the Gobi tent playing at the same time as Jeff Mangum and The Shins, leaving one to scratch one’s head and wonder what a lady has to do to be a big deal to more people.

Make a record with David Byrne? Okay, Annie Clark (St. Vincent’s Clark Kent) did that, which really just added to the resume of iconic songwriters she’s worked with, which already boasted Andrew Bird, John Darnielle, Matt Berninger, Justin Vernon, and Sufjan Stevens. But St. Vincent was allowed to play before bigger audiences via the Byrne collaboration than her own project had ever managed and undoubtedly earned a whole new fanbase of Talking Heads faithful that were introduced to her through Love This Giant.

Her self-titled fourth LP seeks to continue this upward momentum, and she has savvily turned to major label imprint Loma Vista to help get more ears on it. More importantly, Clark has risen to the challenge on all levels, crafting a compact and focused album with more pop sensibility than any of her previous releases. While she has penned repeatable gems in the past (like “Actor Out of Work” and “Cruel”), St. Vincent features a consistent parade of tracks that will be comfortable with new heights of popularity. “Rattlesnake” and “Birth in Reverse” could almost be considered fun if not for Clark’s lyrical emphasis, her words so vivid that they render her songs nearly impossible to reconcile away from them. The DFA-indebted electronics on the opener are a reminder that you can’t just tune out St. Vincent’s words and dance. But that’s okay — that’s how we like her.

But do we really know her? Clark’s ascent to popularity hasn’t happened because of a crystal clear understanding of who she is or what she is trying to say. It’s more that we like that she’s trying to express herself, that although she can be hard to understand, she doesn’t stop trying to connect. There is no shortage of interviews with her, yet it was Annie Clark teaching a soccer trick that maybe most captivated sections of her audience. And now, with her self-titled album, we’re probably learning more about what is going on in Clark’s mind than ever before, yet the mystery only increases.

“Severed Crossed Fingers”, the album’s crescendo and most affecting number, contains the line “The truth is ugly, and I feel ugly, too,” sung in a clarity that is rare for a St. Vincent album. You remember how powerfully and beautifully she can sing during this track, and yet you also realize why she keeps this hidden most of the time. The song plays on the organic versus the mechanical, with guts and gears coexisting, technology and humanity finding a way to cohabitate. With all the ways technology takes away from the human experience of old, it never obscures humanity in St. Vincent’s songs. Nothing can. Still her “heart is pulled from her chest,” and still it “changed the words that I knew best.”

The aesthetic of the album, crunchier, fuzzier, more jagged and dangerous, is a tool to further veil the feelings, and on “Birth in Reverse”, it can be viewed as a deliberate distraction. And what isn’t? “I Prefer Your Love” finds her declaring her emotional, very real response to a human being as greater than another tool for obscuring ourselves: religion. “Bring Me Your Loves” is Clark at her most menacing, directly displaying a darker kind of love, the kind that pushes harder than it should, that doesn’t treat the partner like an equal. This time it is her overzealous longing that buffers. Both “Rattlesnake” and “Psychopath” find Clark challenging the notion of crazy for her very normal, very human responses to her environment and interactions.

While emotional unavailability is pervasive here, even when she wants “all of your loves” on “Bring Me Your Loves” or “all of your mind” on “Digital Witness”, that latter song explains the album’s central theme: “If I can’t show it, you can’t see it; what’s the point of doing anything at all? This is not time for confessing.”

So, is St. Vincent going to give up trying to relate to the world? No, of course not, even when it seems pointless. She is doing the opposite, in fact, as she tries to reach more people with stronger songwriting and more legible sentiments. On an album where it is easier than ever to know what is going on in her songs, St. Vincent manages to keep her emotional debt still mostly submerged. “A smile is more than showing teeth,” she argues on “Every Tear Disappears”.

Also to blame for the mystery of St. Vincent is the 21st century, her own damaged psyche, computers, mysticism, and anything else that gets in the way of our relationships and our happiness. And though the lyrics seem to come from a fed-up point of frustration, the key to St. Vincent is that she overcomes the futility of relating to others. She still makes music seeking desperately to be understood and appreciated. Still she loves, and hurts, and laughs, and cries. She never checks out when it is so tempting. On “Rattlesnake”, it makes her feel like the last person on earth. By “Severed Crossed Fingers”, someone has found her, and it makes her realize she will never be alone. What happens in between is the fight, which sonically St. Vincent has always nailed, and here she works wonders, writing with gloss and generosity. Her biggest fans may prefer less direct writing, but it makes St. Vincent her most widely appealing album to date, an infectious work that doesn’t ever feel like a compromise.

Pick up a copy of St. Vincent here… 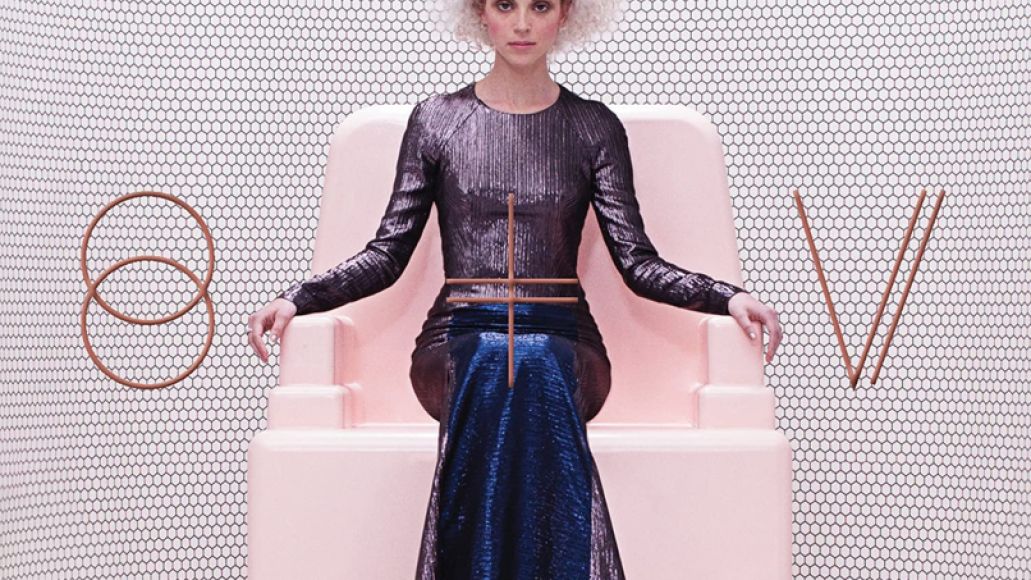 St. Vincent Delivers Her Most Direct Album Yet: Review