One week from today, Bonnaroo will reveal its 2014 lineup. Right on cue, a dedicated Bonnaroovian has whipped up a *fake* lineup poster, based around some of the current rumors. 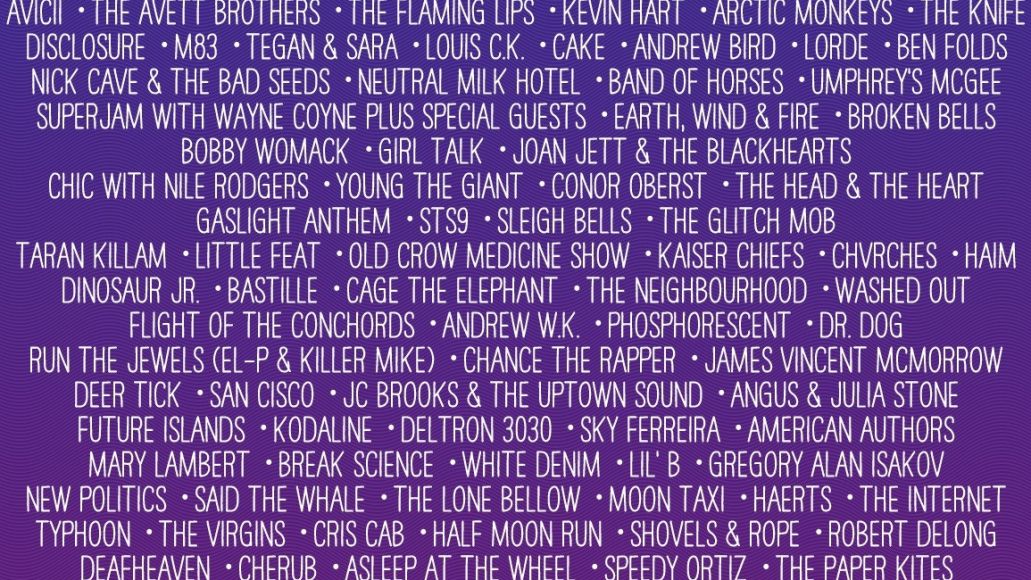 To answer your first question, yes, Kanye West is rumored to headline Bonnaroo. The same Kanye West who famously alienated an entire music festival when he showed up 10 hours late to his 2008 performance. The current rumor of Kanye’s possible return comes from Bonnaro’s unofficial message board Inforoo and a user who has successfully predicted several headliners in the past.

Jack White also appears increasingly likely to play Bonnaroo in 2014, as he’s now booked for two other US festivals in the weeks prior. Plus, the Nashville native is long overdue for an appearance at the festival, as he last played back in 2010.

As for Elton John? Again, a rumor that came out of Inforoo, and based on the musician’s current tour schedule, it does add up.

The rest of this great, seemingly realistic lineup is based on information culled from various sources, everything from first-person artist confirmations (Andrew Bird, Cage the Elephant) to tour routing (Nick Cave and the Bad Seeds) to realistic guessing. For example, Phoenix is from France and is playing Governors Ball, chances are they’ll stick around a week and also play Bonnaroo. The same can be said about Vampire Weekend, Damon Albarn, James Blake, Broken Bells, Childish Gambino, Spoon, AlunaGeorge, and Jenny Lewis, who are all set to appear at Governors Ball. Meanwhile, Arctic Monkeys, Band of Horses, Chance the Rapper, Girl Talk, and Tegan and Sara are playing Delaware’s Firefly Festival one week after Bonnaroo.

Bonnaroo itself has hinted at several acts through its series of Roo Clues, including Janelle Monáe, CHVRCHES, Washed Out, and The Naked and Famous.

Personally, I could see there being another big name at the top of the bill (maybe a late-night set from Foo Fighters or Beck), because Phoenix as the fourth billed act seems like kind of a stretch. Also, there’s nothing to indicate that M83 is ready to perform live again. And just personal bias, but how is Louis C.K. not billed higher than Kevin Hart?

Anyhow, read it, critique it, pray for it, feel free to discuss it in the comments below. And make sure to check back often to Festival Outlook over the next seven days as we’ll continue to offer updates on the latest lineup rumors and confirmations.