Welcome to Festival Outlook, a new supplemental column to Consequence of Sound’s Festival Outlook. In this installment, Alex Young discusses rumors of Kanye West’s possible return to Bonnaroo with CoS contributor Carson O’Shoney.

Alex Young: We all know the story by now: Kanye West showed up eight hours late to his performance at Bonnaroo 2008, put on a below average performance, and has since been banned from the festival. Or — so we thought. Recently, rumors surfaced on the popular Bonnaroo message board Inforoo that Kanye West would return to the Farm in 2014 and the evidence is certainly starting to pile up: Not only does the report come from a pretty reliable source, whose correctly predicted several other headliners in the past, but recently, OutKast announced dates in Europe the weekend of Bonnaroo. Presumably, Bonnaroo wouldn’t book both OutKast and Kanye to play the same year.

From Bonnaroo’s perspective, booking Kanye certainly makes a whole lot of sense. It’d be one of the few festivals to feature someone other than OutKast at the top of the lineup. Not only that, but Kanye has yet to play a festival headlining performance since the release of his latest opus, Yeezus. What better place to make his mark than the festival where he’s been vilified for the last half decade? After all, who doesn’t love a story of redemption?

Obviously, I’m a bit biased when it comes to Kanye and it’s also worth noting that I was not in attendance during the 2008 clusterfuck. But my colleague Carson O’Shoney was, so I invited him to come and talk with me about Kanye’s possible return to the Farm.

First things first, Carson, what were your impressions of the 2008 performance?

Carson O’Shoney: My first impression was that the whole experience was just bizarre and surreal. Taking away all the delays and controversy surrounding the show, it was just a strange sight seeing one of the world’s biggest pop stars take the stage to a half-empty field at 4:30 a.m. in the middle of nowhere, Tennessee. To then play his “Glow in the Dark” tour well beyond the sunrise and end in plain daylight was just absurd. The show itself, despite what some might say, was entertaining if nothing else. I didn’t mind waiting as much as other people seemed to, so once he came on, I was able to just enjoy it like I would any other show. It’s not the best Kanye show I’ve seen by any stretch, but it’s definitely not the “worst Bonnaroo set ever” either.

The setlist was solid even though it was cut short, Kanye seemed unfazed by the pre-show boos and debris thrown on stage, and what (relatively) little crowd that was left seemed to enjoy themselves once he got into the thick of the show. The Glow in the Dark setup didn’t work as well on the farm as it had in arenas that summer even aside from the sunrise, and while I did enjoy some of the stunning visuals and his silly interactions with Jane the Spaceship — I always thought he should have just ditched the whole elaborate setup for a stripped down “normal” set like he ended up doing at Lollapalooza later in the summer. If he had, we could have avoided this whole situation — but he didn’t, so here we are. 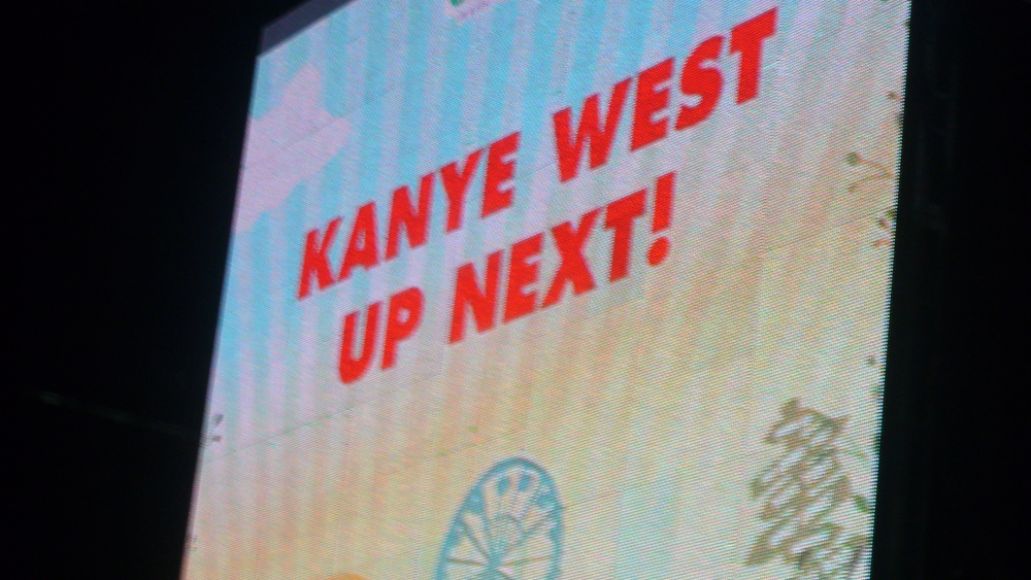 AY: We never really got the full explanation of what happened. It was more of a he-said, they-said situation. Kanye blamed the festival for being disorganized and Pearl Jam for performing an hour beyond their scheduled time. The festival contended they made every accommodation requested by West’s camp. There were some reports that he arrived late to the festival site after attending a birthday party in Atlanta and refused to go on until all other music stopped playing. Kanye countered by publishing a scathing open letter in which he referred to festival organizers as “squid brains”.

Not surprisingly, most Bonnaroovians ended up siding with the festival, turning Kanye West into public enemy No. 1. “Fuck Kanye” and “Kanye Sux” graffiti has been a frequent site at Bonnaroo ever since and the idea of the rapper returning to the festival was as unfathomable as Charles Manson leading a Superjam. Why then, would the festival even consider bringing back Kanye? Time heals all wounds, and in the years since the infamous performance, Kanye has released his two greatest albums. What better way to differentiate yourself from all other festivals with OutKast at the top of the bill then by booking the greatest living emcee? And you know Kanye is going to bring it: he usually produces his best work when his back is against the wall.

What I do wonder is how the general Bonnaroo population will accept him.

Is Kanye West finally welcome back to Bonnaroo?