“We demand a Russia that is free. A Russia without Putin. Russia will be free.” — Pussy Riot at Barclays Center, February 5th, 2014

This might’ve been the first concert that I’ve attended that wasn’t really about the music. Although a varied and talented array of acts—Blondie, Imagine Dragons, Cold War Kids, The Flaming Lips, and more took the stage—Barclays wasn’t really packed on a Wednesday night because of them. And it wasn’t for Amnesty International that we showed up, even if their gracious sponsorship made the event possible. No, we were there to see two women from Russia who went to jail for their beliefs.

That’s not really a thing we encounter much or see anymore, and certainly not in the defiant, beautiful form that Nadia Tolokonnikova, Maria Alyokhina, and Yekaterina Samutsevich displayed in February 2012 when they chose to engage in a protest that would almost assuredly land them in prison. Pussy Riot is a phrase that has come to represent more than the band themselves, something they stressed repeatedly during a press conference before the concert that night. When asked how Americans or other supporters around the world can support them in their rebellion against Putin and the Russian government, they answered: 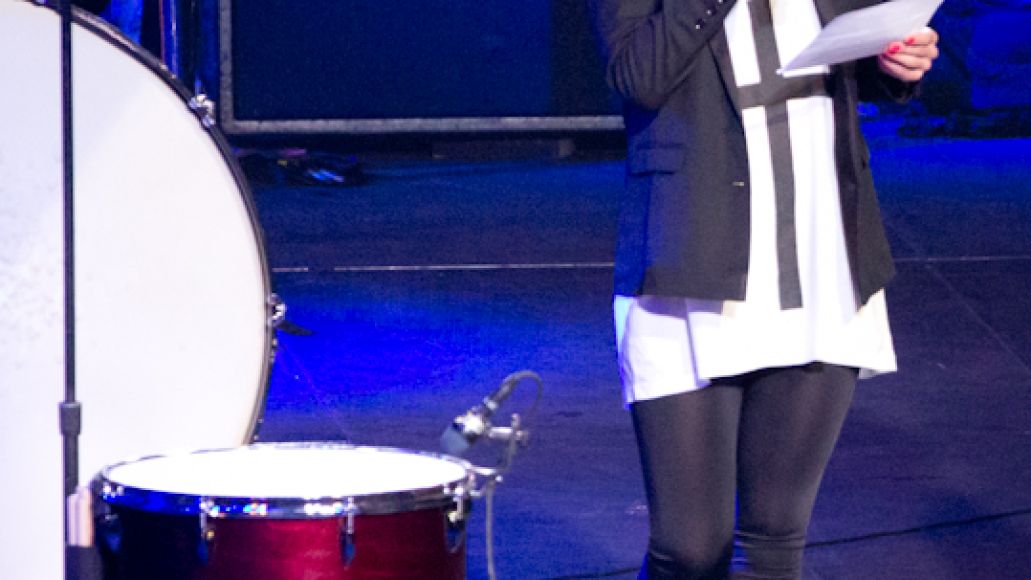 “You can even do a Pussy Riot performance because anyone can be a member of Pussy Riot.”

This is particularly important to note, given that some members of the Pussy Riot collective have taken issue with the benefit that was held last night. The Guardian reports that a blog post up on the Pussy Riot site condemns Nadia and Maria for appearing at an event where tickets were sold, seemingly regardless of the cause or circumstances. Amnesty International’s Bringing Human Rights Home concerts aren’t designed for capitalistic gain or profit, and these accusations smack of hair-splitting. Still, the event did much to publicize the cause of Pussy Riot, especially given the approaching Winter Olympics that begin in Sochi, Russia tomorrow.

As the Olympics approach, America’s scrutiny, along with international attention, once again swings toward Russia. The scene is grim. There is openly anti-gay legislature on the books, riots are being incited against LGBTQ people—these are issues that remain at the forefront of Nadia and Maria’s minds. But they refuse to give up on Russia and they refuse to stop fighting. Even from the relative safety and elevated status that being in the U.S. brings them, they refuse to even think of not returning to their home country.

In their conference, when pressed on whether they would return to the country that imprisoned them, they had this to say: “No, we’re going back to Russia. We want to live in Russia. It is our country and we want to make it a free country. We want to say to Putin: leave.” Surely brief performances from international musicians won’t be the thing that convinces Putin to step down as the dictator of Russia, but the evening went on with a fervor that was sure to spark activism in some hearts. The brief sets punctuated short speeches delivered by various public and private figures in support of borderless human rights. There was bright fun amid the din, as to be expected. Cold War Kids, Colbie Caillat, and The Fray delivered perfunctory, polished sets punctuated with passionate statements in support of the cause.

Blondie swaggered with two older staples “One Way or Another” and Call Me” but stumbled with the newer “A Rose by Any Name.” Her wry comment that opener “One Way Or Another” was a barb dedicated to Pussy Riot et al.’s detractors indicated that the years haven’t changed Debbie Harry’s impudence much. The excellent keytar solo on “Call Me” indicated that her old sound still hits with crowds too, so much so, that when Cake took the stage right after the response was more lackluster. 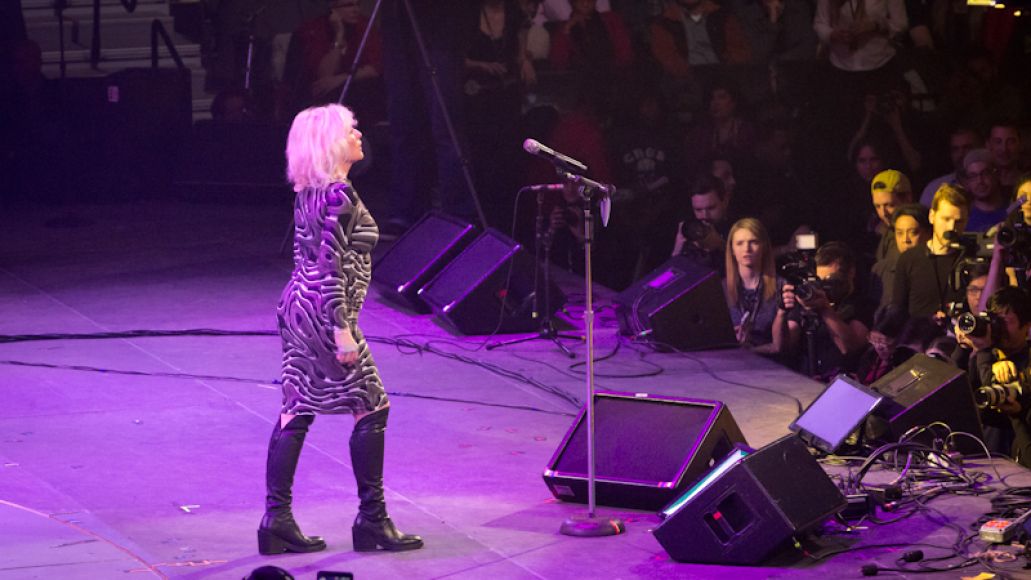 Then, Madonna came out to introduce Nadia and Maria, claiming that their activism had made the word “pussy” a sayable word in her house when it used to fall into the off-limits category for her eight-year-olds. Her support of Pussy Riot and vocal support while on tour in Russia did a lot for the profile of their cause though—her celebrity power still seemed to be a driving force for a lot of the audience that night. It was here that we saw the machinations of a concert like this most clearly: People are inspired to activism by artists who’ve inspired them personally.

When Nadia and Maria did appear, wearing long tunics emblazoned with crucifixes, they gave a fervent performance of a political speech that outlined many of the same concepts they’ve addressed all along. But, it seems that time in prison has deeply impacted the two women, who now fight an international cause against injustice for political prisoners or those who are wrongfully imprisoned.

That their earnest, chilling passion bled into the Imagine Dragons arena-rock ethos was a little uneasy, but that didn’t stop the crowd from erupting for the recent Grammy winners. Lauryn Hill took the stage after Dragons, and performed the night’s longest set. Her recent, sketchy imprisonment for tax-related issues felt like the closest personal experience any performer of the night may have shared with Nadia and Maria. 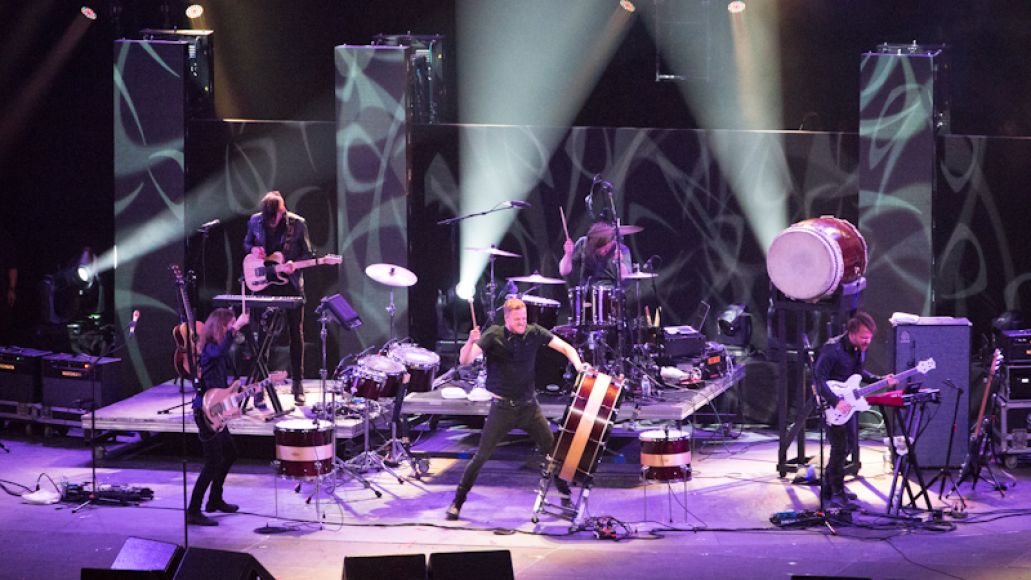 For the final few acts of the evening, Amnesty had slated acts with a long history of political and social activism. The closers began with Yoko Ono fronting the Flaming Lips’ lit-up tinsel mountain. Their set, along with Bob Geldof’s prior blatant Irish nationalism, felt a bit attention grabbing among bands who chose to keep their sets fairly bare and outwardly focused in the somber spirit of the event, as Tegan and Sara did. Performing right before the Lips, their set was compacted, which was a shame given their personal connectional to the LGBTQ community.

And while it’s typical for a Flaming Lips show, ending such a political and gut-wrenching night with glitter canons during their “Lucy in the Sky With Diamonds” cover felt gauche and the relative silence of the audience reflected this. Wayne Coyne and his cohort were not without redemption, though, when they segued into “Do You Realize??” Of any song performed that night, this one seemed to encapsulate the personal and the political, seamlessly pointing to the importance of individual moments and the overarching beauty of the tremendous fact of existence.

For a finale, a large number of the night’s musicians returned to the stage for a subdued version of Dylan’s “I Shall Be Released” led by Sean Lennon. It was a fitting finale for a night packed with meaning, music, and politics. Let us hope these concerns don’t fade from our minds when there isn’t a star-studded event to keep them there. One thing Nadia and Maria said in their primary press conference that stood out the most was their belief that musicians have political responsibilities. 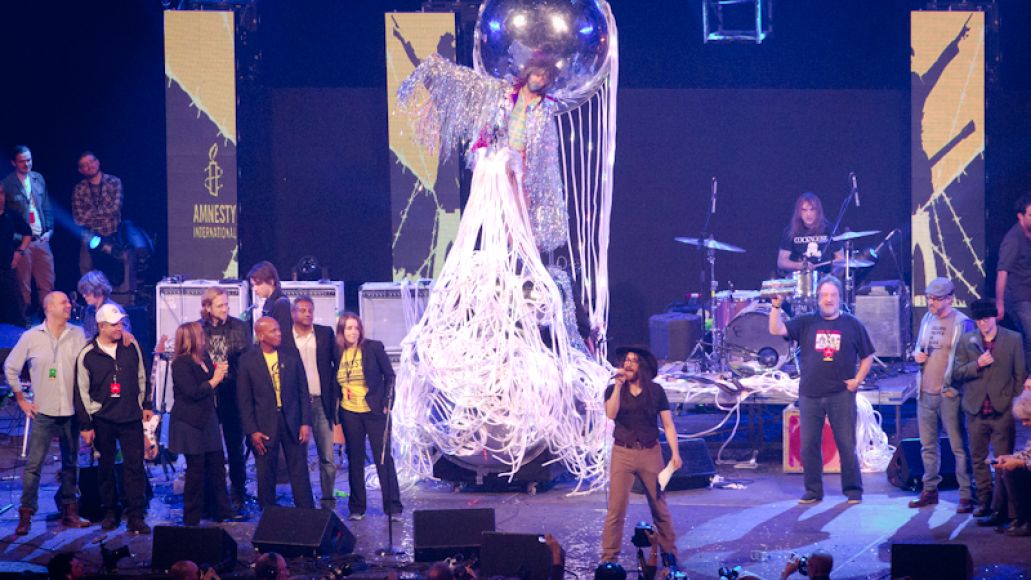 “When we first started Pussy Riot one of our central thoughts was that musician must bear social responsibilities,” they said. “Musicians must sing not only about sunshine and love. We must sing about people who don’t have a voice.”

As the Olympics begin, and despite internal conflict within the Pussy Riot collective, it’s essential to remember what’s really at stake here: those without voices. 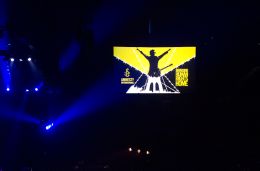 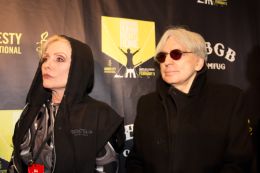 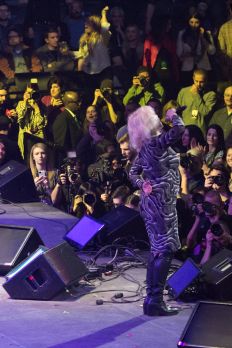 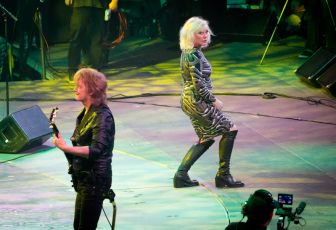 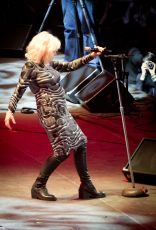 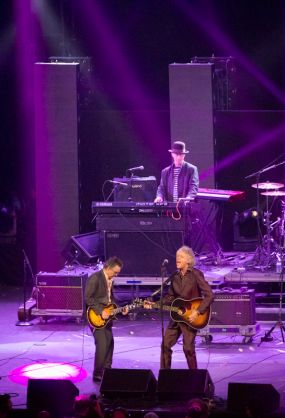 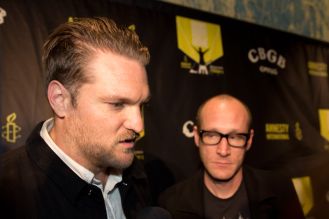 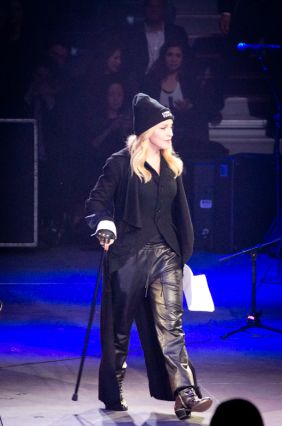 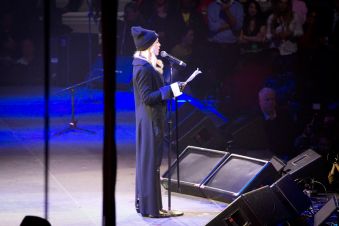 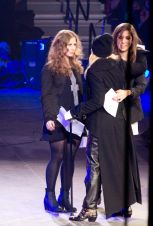 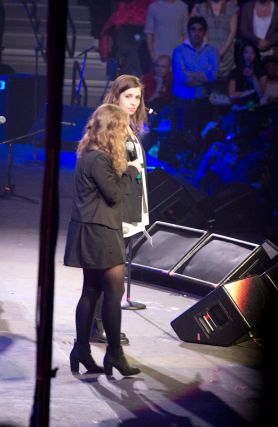 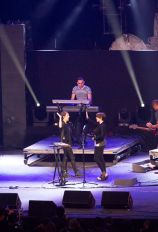 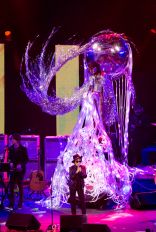