Savannah dream-pop outfit The Casket Girls will release their sophomore album, True Love Kills the Fairy Tale, on February 11th via Graveface Records. In anticipation, it’s streaming in full below.

The trio — comprised of Ryan Graveface and sisters Phaedra and Else Greene — claim the follow-up to 2012’s excellent Sleepwalking was written by “spooky happenstance.” After dropping off a collection of demos to the sisters’ house, Graveface returned sometime later to find them in a trance-like state.

“Elsa was sobbing and reciting poetry,” the label recalls, “while Phaedra was just staring straight ahead writing it all down, like catatonic. The next day they dropped off a CD and said, ‘We don’t even know what’s on this. You can throw it in the garbage if you want.’ I sat down and listened all the way through and cried. I was like, ‘Holy shit! They actually wrote a record like that!’ I booked studio time and had them re-record every note just as it was on the demo.”

Whether born through possession or simply a non-traditional creative process, the resulting 11-track collection exists in the ether between fuzzy garage rock and ’60s girl group pop. Lead single “Day to Day” buries the Greene siblings’ ethereal harmonies under a mound of blown-out power chords and wailing dissonance. Though not as outright noisy, “Secular Love” takes that romantic pop sensibility and spins it into the realm of mind-altering psychedelia. And by building from sweet and understated into a cacophonous wall of feedback, “Heart and Lungs” proves to be the most subtle and well-balanced offering.

No matter how bubbly or bizarre (or some combination of the two) each track winds up, Casket Girls’ overwhelming sense of spontaneity and mysteriousness make the album a rabbit whole worth tumbling down.

Consequence of Sound also caught up with the trio to talk about the album’s pop influences, the story behind the album’s recording, how they’ve grown as a unit, overcoming the sophomore slump, and much more.

It’s the outfit’s second album; what’s changed or shifted in the operating dynamic? Do things come easier, or are there still “growing pains”? Inter-relatedly, was there fear or trepidation coming into this regarding the dreaded sophomore slump?

Ryan: Well, I think the biggest thing that has changed is that we really set out to make a record this time around. LP1 just kind of happened. On the music side, I sat down one night after drinking copious amounts of homemade absinthe and said to no one, “It’s time to begin writing LP2.” We’ve been super-lucky in this project to where things are just kind of magically happening. The ladies were pretty horrified to play live, as it was supposed to be a recording-only project, but I feel we’ve all embraced everything at this point. I fear nothing like that as I simply wouldn’t put out a sophomore record for something that was forced and difficult to put together. I’d simply kill the project and move on.

Somebody wrote in an early interview that, “This is about as close to a Top 40 record as Graveface Records is ever gonna get, albeit one that’s spiked with strychnine and bittersweet melodies.” Do you agree this is definitely a pop-centric record and made to be accessible, or is there something else, maybe something slightly more complicated, going on? Is the album’s impact/scope/accessibility even a concern?

Ryan: I would say it’s incredibly poppy although that wasn’t intentional. I think it sounds poppier than LP1 because it’s actually ‘produced’ produced. I spent a lot of time on the sounds, we spent some loot on recording drums and vocals, we spent some loot on the incredible Andy LeMaster to mix all of that together, etc. So it’s pretty fucking lush. Lyrically I feel it’s more complicated than typical pop, that’s for sure. I can’t speak for anyone else, but I helped to create something I’m incredibly proud of and therefore could care less if there’s an impact. That being said I wouldn’t poo poo increased exposure.

Ryan has that really great story about the album’s recording, where the sisters just magically came up with the record and how it was subsequently redone and all that. That says to me two things: 1) there’s a kind of mysticism and unknowing to the album’s genesis, as if all by happy accident, and 2) there’s a clear cut division of labor, with Ryan as the kind of guiding force. How true are either of those?

Ryan: This whole project has been magical. How we came to meet, how I write/record the structures, how they come up with lyrics… it’s all been really amazing to be a part of. Bands that I’ve been in in the past have seemed so forced where this feels very organic (excuse the buzzword). I’m kind of a guiding force simply in that I create the structures and run the label we’re on. 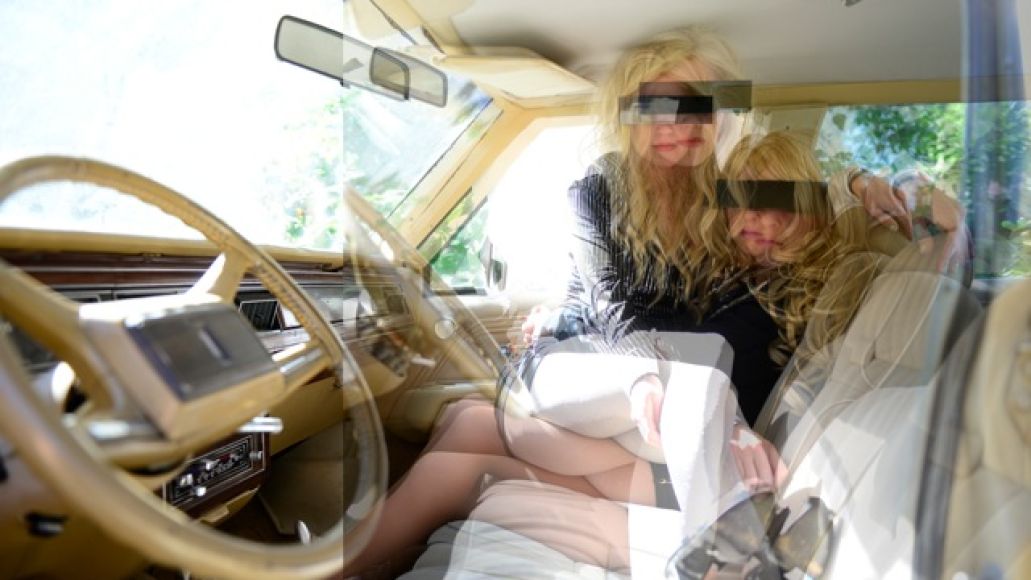 Casket Girls don’t seem to work or write or record the same way as a “traditional” band. Does that help to be kind of left of center, or do you guys see yourselves coming together in a more established kind of dynamic?

Phaedra: I think that we do what works best for us in this present incarnation. Ryan’s music really inspires and speaks to us, but it needs to be fully realized when we hear it for us to reach that place. It allows us all to create in a bubble, and I think that dynamic would change if we were all sitting in a room staring at each other, trying to make up a song. That sounds terribly frightening to me!

Phaedra: Wow, good question. I think there has to be a correlation between the two simply because we are all the same people, but it seems like we all pull pretty deeply from the subconscious in our writing, so it’s hard to pinpoint what exactly the sea change is from record to record. I suppose if I really thought about it, the new record could have a different energy because we are all more comfortable working with each other. Touring really helped that part – helped boost our confidence – and maybe subconsciously changed how we all approached the writing of the new record.

It seems to me, and I saw this especially with the first LP, that the band operates by playing up two dynamics. One’s the cohesion between Ryan and the sisters, and then the second’s a kind of tension, in a good way, between that general sense of imbalance.

Elsa: Yes, it’s an interesting and definitely unexpected marriage. It seems strange that it works at all, yet it also feels like the perfect match. Ryan’s music has inspired us in such a way, that we find ourselves on a completely different life path. And I agree it’s this tension of it not being an obvious match that keeps it propelling itself in new directions. And speaking of imbalance, that is one of the themes our new record seems to explore. Fay and I kind of don’t believe in imbalance as there is always that equal and opposite missing piece that makes all things whole.

Is there a kind of arc, be it personal or some kind of narrative, found within the album? Is there maybe a song, one that’s maybe the band’s favorite, that helps to speak or inform that whole thread? To me, the title and the feel of some of the songs hint at a kind of “concept” exploring love’s false promises.

Elsa: Well, lyrically this record was written in a whirlwind. So there wasn’t necessarily a premeditative concept; however, in retrospect it clearly has overarching themes. I feel the bigger concepts are less specific than love, but somehow everything always comes back to love, doesn’t it?

If someone could only give the LP one listen, what’s the one thing or idea or concept you’d hope they’d be able to pull from it?

Elsa: Well, musically the record deals in some pretty heady subject matter, yet there is also a feeling of not taking anything too seriously. So coming back to balance and imbalance, I would hope the journey through this piece of work would leave the listener feeling like they just got off a roller coaster: scared and excited.