If there’s one band who pours their heart and soul into Record Store Day, it’s The Flaming Lips. Past installments of the annual holiday have seen the band release a full cover of Pink Floyd’s The Dark Side of a Moon, a collaborative LP titled Heady Fwends, a toy frog containing the band’s first demo, a life-size chocolate human skull, and a variety of similar ambitious and wacky releases. So, what do the Lips have on tap for Record Store Day 2014, set for April 19th?

As The Future Heart reports, the band plans to release a vinyl edit of “7 Skies H3″, which you may know best as the band’s 24-hour long song. “7 Skies H3″ was first premiered online for Halloween 2011 and 17 copies were later released on flash drives encased in human skulls, each of which sold for $5,000.

The vinyl edit due out for Record Store Day features a 43-minute version of the song — or, as the band describe it, an “extraction and reduction.” The release was mastered by Dave Fridmann, engineered by Michael Ivins, and features artwork from longtime “visualist” George Salsibury.

Wayne Coyne discussed the project in a recent interview with Alternative Press:

“We made 17 of those [2011 skulls containing “7 Skies H3”] but that music is – a lot of people really, they want to hear bits of the music but it’s quite a commitment. So Dave Fridmann and his son have engineered a couple of times this 24 hour song down to three albums, two albums and a one album version…I’m going to listen to all those and see if maybe we would release something that takes the 24 hours, sticks it on something manageable – like a couple of records – and maybe we’d release that. Sounds like it could be really fun. And when I go back and re-visit that music I think fans would really love it.”

Listen to the first part of “7 Skies H3″ below.

And here’s a photo of the vinyl’s test pressing: 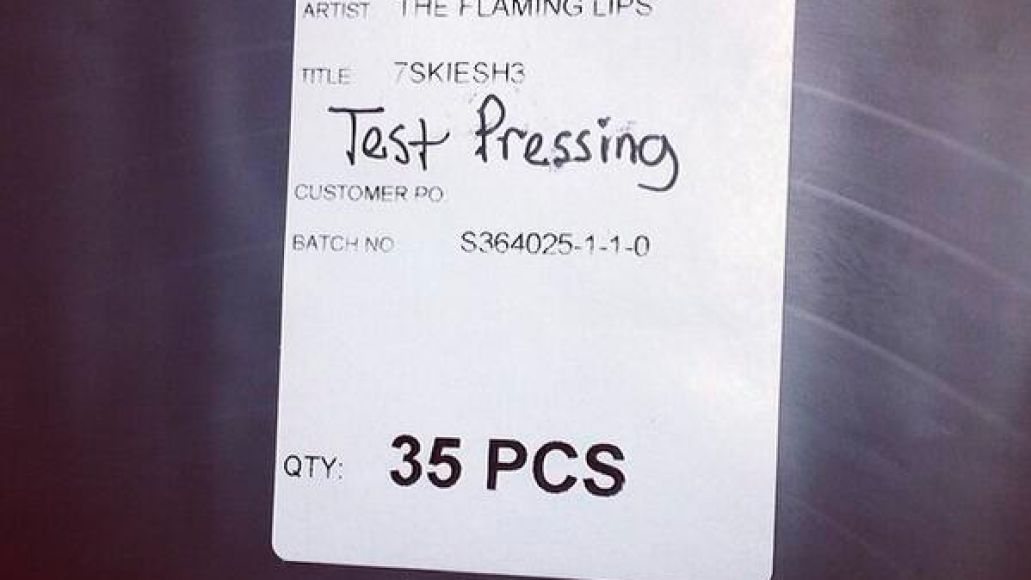