“Welcome to the United States. Have you been to an Olive Garden yet?” That’s how Stephen Colbert opened his interview with Pussy Riot on Tuesday night’s episode of The Colbert Report. Despite speaking through a translator, Nadya Tolokonnikova and Masha Alekhina went toe to toe with the late night comedian, laughing along as Colbert made jokes about being a personal friend of Vladimir Putin and rolling their eyes when he threatened to search them following the taping of the episode. “We’ve had two years of practice hiding things from searches,” Nadya replied.

When Colbert asked the women why they were against Putin, someone “who’s just trying to preserve the peace and bring Russia to a brighter future,” Masha responded, “We have different ideas about a brighter future. We don’t want a shirtless man on a horse leading us.”

Nadya and Masha said they were released early from prison because “[Putin and other government officials] were fed up with us.” Asked if they believed it was a publicity stunt ahead of the Olympic Games, they replied, “We don’t think it was a successful stunt; we don’t think it improved the image of Russian. Maybe Putin made a mistake and should throw us back in jail.”

As for why they came to America, Nadya and Masha said they intend “to look at prisons, talk to human rights activists, and learn from their experience.” Following their release, the women have called for reform of the prison Russian system.

Lastly, Colbert asked about the origins of Pussy Riot and how one (such as himself) could become a member. “Even you” could be in Pussy Riot, they told him. “We could even come up with an honorary Pussy Riot tradition for you… but we’ll only talk to you about this after you call Putin.” Well, ask and you shall receive and by episode’s end, Colbert was sporting some bright new head wear: 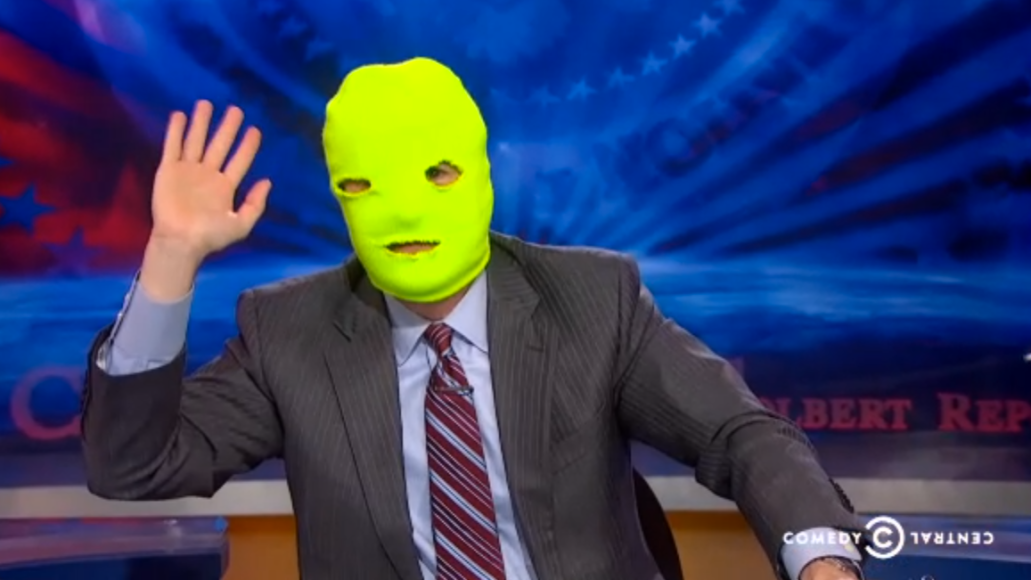 And if you’re wondering why they call themselves Pussy Riot and why they use the English translation, it’s because “we wanted to let English-speaking people enjoy themselves,” explained Nadya.

Watch the interview below.

On Wednesday night, both Pussy Riot members are due to speak at Amnesty International’s Bringing Human Rights Home concert in Brooklyn. They’ll be joined by Madonna, The Flaming Lips, Lauryn Hill, and Cold War Kids, among many others.