A few years back, I was avoiding my family on Christmas by listening to Arcade Fire’s Neon Bible. With all the grace and couth in the world, my cousin slugged me in the arm and asked what I was playing. I told him, and he responded that, because he was unfamiliar with them, it must be “hipster bullshit.” Oh, and “They’re probably not as good as Pennywise,” he added. Since then, most of our interactions have dealt with me trying to quantify and explain what really is or isn’t “hipster bullshit”, with any well-thought arguments about cultural context and artistic merit met with “Whatever, tool-bag.” Next time around, however, I’m just gonna slap the “The Hipster Music Index” right in his Affliction-wearing grill and do a little two-step.

Created by Priceonomics, the “The Hipster Music Index” is a way to confront “humorous generalizations about hipsters” by using “data capabilities to shed light on the hipster condition.” Priceonomics used two primary criteria to discern just what exactly the average hipster listens to: positive Pitchfork album reviews and how much traffic/attention any given artist’s album review is receiving via Facebook. So, just what did they uncover in their pursuit of higher knowledge? 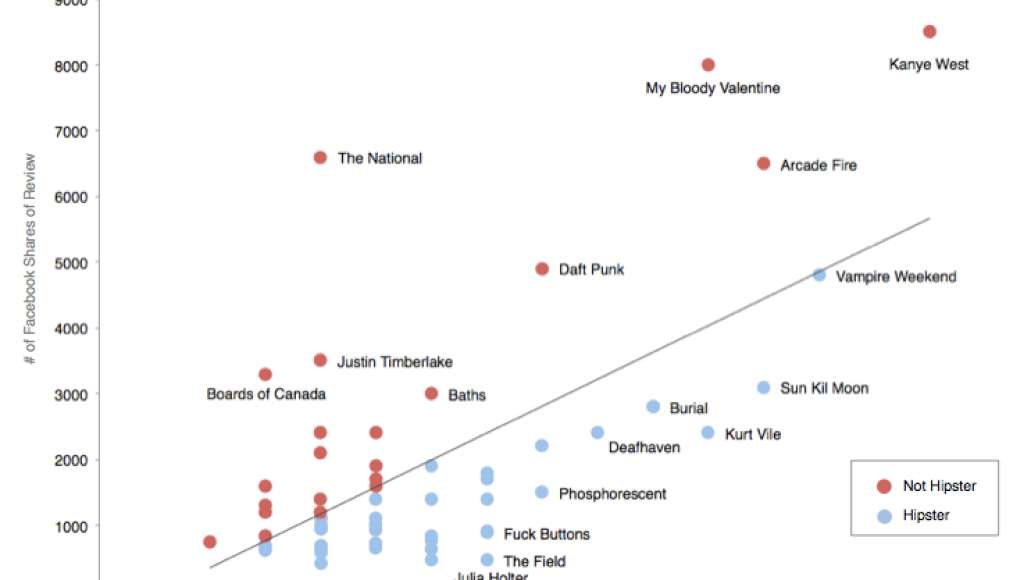 As Priceonomics explains, “For a given Pitchfork Review Score, the trend line uses a linear regression to predict how many Facebook likes you’d expect the album to receive given its critical acclaim. By our criteria, the further below the line a blue dot is, the more hipster the band. (It’s high quality but obscure.) Dots above the line represent more mainstream (not hipster) bands.The model appears adept at separating critically acclaimed but mainstream bands (Arcade Fire, The National, et al) from the critically acclaimed but obscure (Fuck Buttons, Sun Kil Moon, et al).”

Using that methodology, the “researchers” then compiled a list of the 25 most hipster bands. That is, the bands with the most critically acclaimed albums that aren’t widely shared on Facebook: 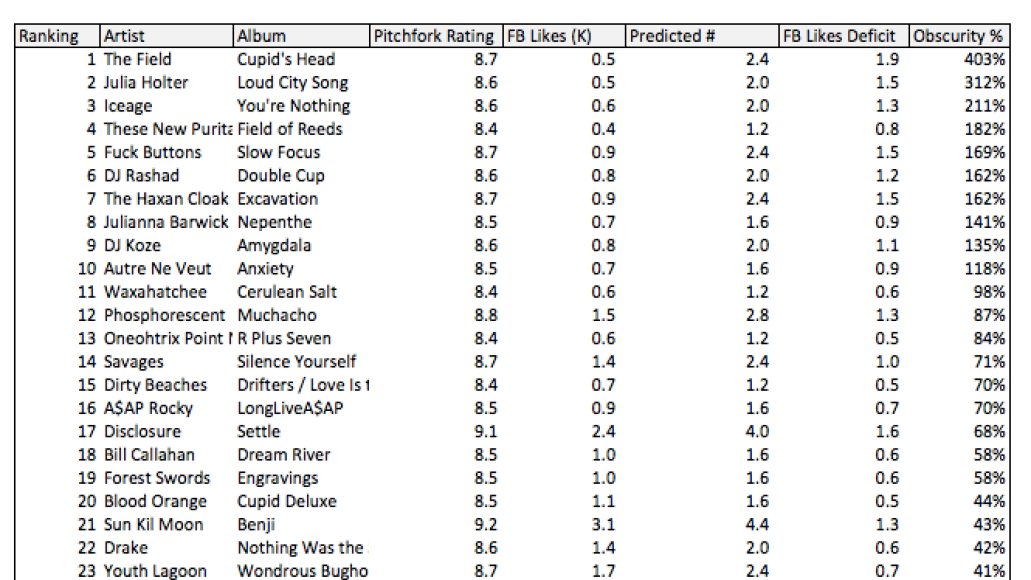 From that graph, there’s a number of interesting conclusions and tidbits to draw. As a rule, fewer Facebook likes equate a higher obscurity percentage, which means acts like The Field and Julia Holter obtain true hipster-dom. Still, having a lot of likes isn’t always a factor: Disclosure had over 2.4k Likes and still land at No. 17, while Danny Brown had only 1.8k and comes in at the bottom of the list. With the Priceonomcis methodology, a huge deciding factor is a review’s predicted number of Facebook likes versus how many they actually have. Because Iceage has a deficit of 1.3 (the difference between a predicted 2k and an actual number of likes closer to .5k), the Danes land at No. 3. Essentially, perception, and not just mere statistical data, places a vital role in overall placement.

In their continued exploration, Priceonomics subsequently pondered about bands that were perceived as being beloved by hipsters but were too widely shared on Facebook to be considered obscure enough. Basically, bands that seem to have the most mainstream appeal or widespread accessibility. The “bro bands”, if you will. 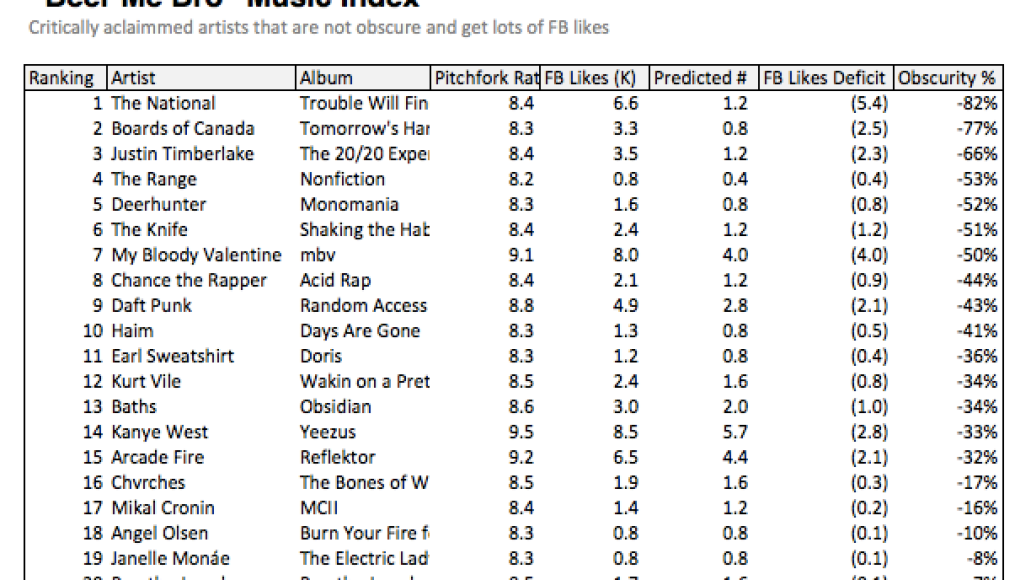 As you can see, the methodology’s been reversed here: the more negative an artist’s obscurity percentage was, i.e. how many more Facebook likes they had then originally expected, the higher a band ends up on the final list. That means The National are the most “bro” band because Pricenomics assumed they’d have 1.2k Likes when their review actually had 6.6k Likes, for an obscurity percentage of -82%. In contrast, Run the Jewels (El-P and Killer Mike) only had a Facebook Likes deficit of 0.1, giving them a -7% obscurity rank and placing them closer to the spectrum of hipster music. While this list has big-name acts like Justin Timberlake and Kanye West and Arcade Fire, there’s also more intriguing inclusions by Chance the Rapper, Baths, and Mikal Cronin. Once again, the whole thing comes down to perception and whether or not an artist exceeds or falls short of preconceived expectations.

Sure, the entire study was conducted by a “team of bike-riding, IPA-sipping, vinyl-listening, Mission-living hipsters”, but it does raise some interesting questions about the inherent popularity of various acts, a band’s cultural dissemination, and the impact of social media on our shared listening habits. While there’s nothing scientifically valid here, it’s an intriguing case study nonetheless. Plus, the next time someone calls you a hipster, ball up this list and smack them in the ear with it.

Below, enjoy the bro-ish stylings of The National and the obscure artistry of The Field: