Abandoned flyers, torn gig posters, and empty chip bags litter the historic 6th Street like scattered autumn leaves while bands, brands, bloggers, and music lovers migrate back from whence they came. South by Southwest (SXSW) 2014 had its share of soaring highs but also some dreadful lows. It’s important to take a moment to reflect on the beautiful lives that were needlessly cut short. It’s also a reminder that we’re only here on Earth for a brief window of time. Appreciating art, culture, and the friendly faces around you continues to be the best way to spend those fleeting moments.

SXSW Music 2014 played host to a smorgasbord of rock, hip-hop, EDM, DJ sets, street performers, and even South Korean post-rock droners. It would take a mercenary legion of logistical masterminds to cover all of the shows that went up this past week. But a handful of dedicated CoS staffers, writers, and photographers did their best to present a glimpse at the tip of the iceberg. And while those tired heads finally get to sleep in their own beds this evening before an inevitable week of detox from booze, sunshine, and BBQ, CoS invites you to revisit some of Saturday’s highlights. 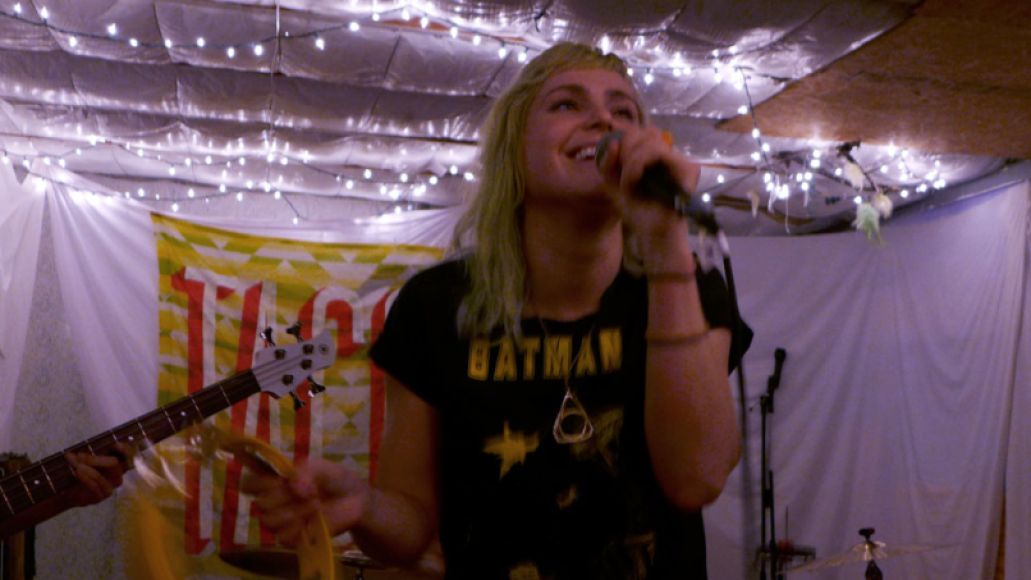 Northeast of downtown on 12th Street, palindrome aficionados Tacocat played under a canopy of white Christmas lights at the DIY venue/art gallery The Owl. The Seattle band’s sound is a throwback, and they embrace it; amid songs taken from their new album NVM, Tacocat covered “Alien Girl” by the Cramps. It fit like a glove, especially right next to their original song about the pains of being on your period, “Crimson Wave”—possibly the catchiest tune ever written about menstruation.

With green hair and a yellow tambourine, singer Emily Noces led the band’s playful, casual tone. Bodily functions aside, her lyrics tackled some of the thornier realities that go with being female. NVM’s “Hey Girl” shrunk the ongoing drama of street harassment into a delicious, two-minute bite.

“I can’t believe I’m awake right now,” Noces laughed between singing. “It’s like five in the morning.” If they were still tired from traveling, though, Tacocat didn’t show it. Their affable demeanor (and their Miley Cyrus t-shirts) endeared them to the Owl’s small gathering. They’d go on to play an official showcase later Saturday evening, but the gallery’s lo-fi setting seemed ideal for Tacocat’s sweet and grungy charms. –Sasha Geffen 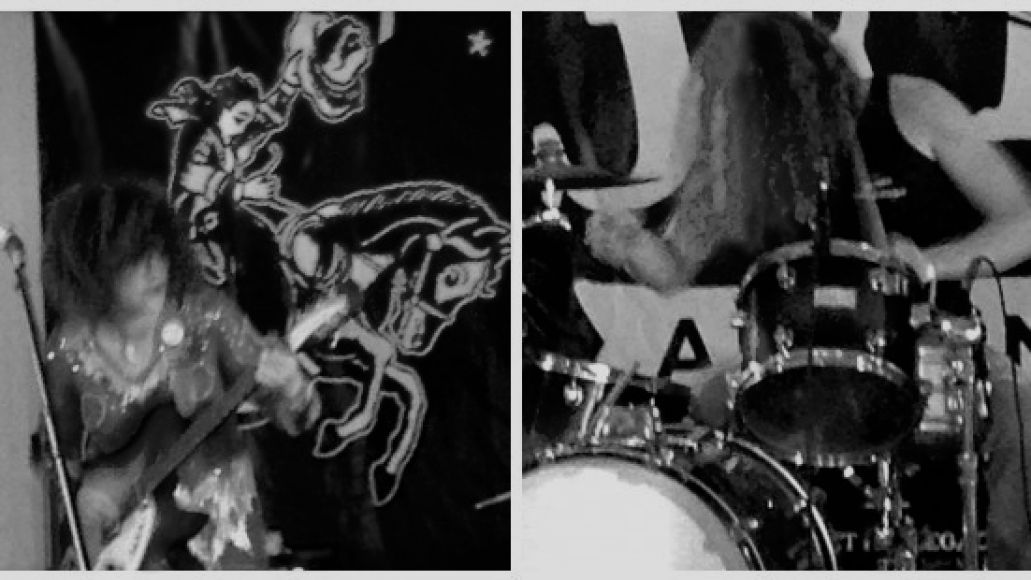 “He definitely just ripped the bandage off of a new tattoo while drumming,” the dude next to me said, dumbfounded. There was Francis White, red mane flopping ecstatically, smashing away at his kit so hard that the wing nut on one of his cymbals popped off, and he was doing so with a freshly minted, Sailor Jerry-approved tattoo on one arm (the venue would, apparently, give you a free tattoo, the style of which was chosen by a spin of a wheel). The equally redheaded and ferocious Alex White stood a few feet away, tearing at her guitar with every swipe. Tracks like “Secret Garden” roared with the kind of exuberant abandon that would come with traveling from Chicago and relishing SXSW life for a few days (trust me). –Adam Kivel 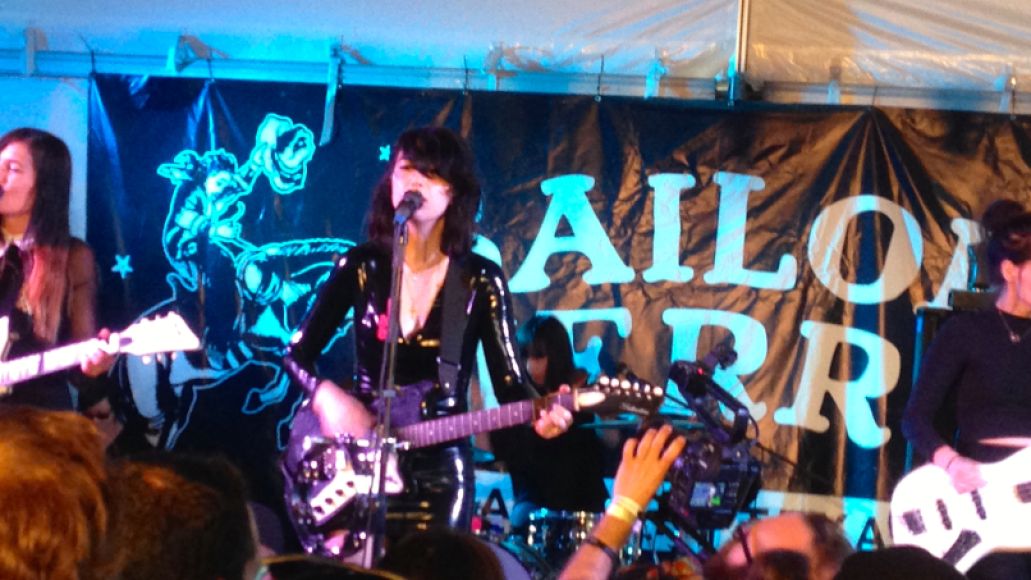 There wasn’t much banter or even small talk during the Dum Dum Girls’ set at the Sailor Jerry House. This was a professional barnstorming, the black latex-clad Dee Dee and her black-clad band taking the stage, ripping through their set without a second thought, and then leaving the large crowd giddy and wanting even more. While a previous SXSW set had featured Ms. Debbie Harry, the only hero being worshipped at this stage was Dee Dee herself, droves of adoring fans packing in under the awning to see the Girls knock out swoon-worthy jams like “Rimbaud Eyes”. The band played like an oiled machine, bassist Malia hopping onto the kick drum for a while and still dropping every weighty note with an almost supernatural precision. While their albums might run into some fuzz and haze, their live sets continue to run on a leaner energy, forgoing the synths and getting straight to the heart of the garage pop tunes. –Adam Kivel

I usually try and avoid such pretentious, slightly hipster malarkey, but I knew and adored Donald Glover, a.k.a. Childish Gambino, before all y’all, back when he was more actor than rapper and released nerdier fare like 2009’s Poindexter. I’m not revealing any of this to earn cool points, or to tout that I was ahead of the curve; instead, I say the following as someone who has followed him from the infancy of his musical career and is beaming with a sense of pride: he’s truly become a superstar in his own right. 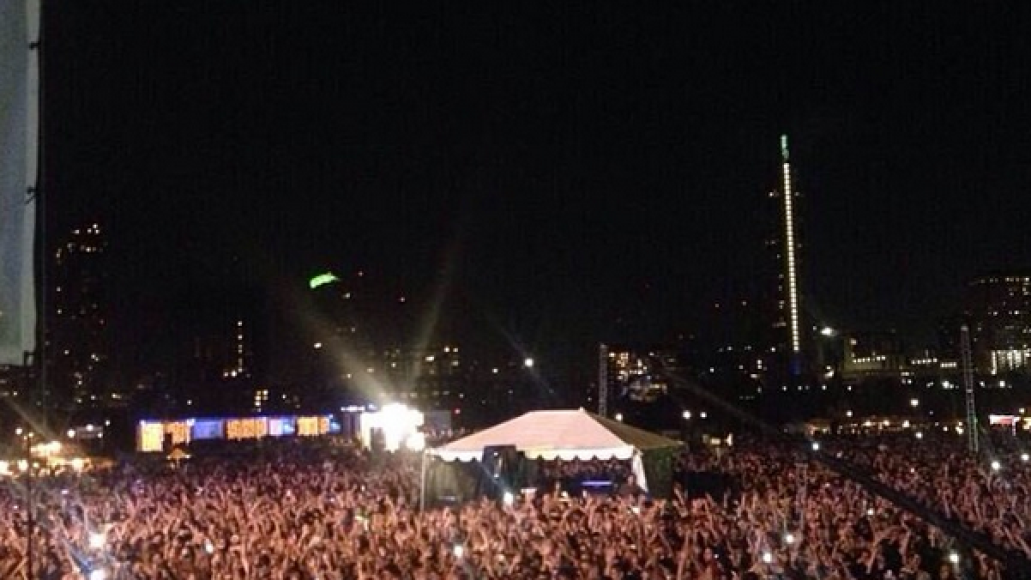 If you had asked me three years ago, when he was rapping lines like “You lucky that I’m Randy, Aziz Ansari”, if I thought Gambino would be playing to a crowd of 15,000 people, I probably would have said “Troy Barnes? No way, bra.” Now, putting his acting career on the back-burner for a bit and really focusing on developing as a musician, Gambino’s ascended to new heights, looking increasingly comfortable and more than capable in becoming a big(ger) name in rap. Gambino was already one heck of a rapper/singer/dance/master of ceremonies, and now he’s reached a new plateau, finding extra confidence and inspiration to take his inherent charisma and natural abilities up a notch or three. Be it a doubly raw, doubly visceral couplets from “Worldstar”, some extended harmonizing on “3005”, or just a total dance party/freak-out moment during “The Worst Guys”, Gambino’s bag of tools has grown by leaps and bounds, demonstrating a suaveness and certainty this self-professed nerd lacked for many years.

If Gambino hadn’t become more confident, then there’s no way his current stage show would work. At the most very basic level, the “Deep Web” tour is a true test of any artist’s mettle; hell, it begins by giving fans an opportunity to tweet whatever awful trash they have rolling around their heads and have it displayed on a big screen. From there, Gambino slowly unravels a thinly-structured narrative involving otherworldly parental advice, broken relationships, youth violence, and threesomes. It’s an almost unnecessary addition, but it does offer Gambino a chance to indulge his other creative interests; plus, it’s a mighty balancing act between putting on a hell of a performance and maintaining some intricate storyline that occasionally borders on the Fellini-esque.

If there’s one complaint, though, it’s that playing Because The Internet most of the way through can be a little daunting; sure, it’s solid material, but it often feels like he’s working harder to tell a story than to simply entertain. It’s fine when the momentum picks up, but it does harm the show’s sense of kinetic energy during the album’s slower, more deliberate moments.

Luckily, Gambino regains any lost steam with a killer encore. Rattling through Camp and assorted mixtape standouts like “All The Shine”, “Fire Fly”, “Bonfire”, and “Freaks and Geeks”, among others, Gambino eschews his artistic vision in favor of displaying his prowess as a dynamo on the mic and a consummate crowd-please. It’s clear he understands the separation between his material (BTI has the artistic merit and progressiveness, while the rest of his catalog is more playful and immediately entertaining) and he’s willing to do what’s needed so he has his cake and the audience can eat it, too. Perhaps more than anything else, that’s the most valuable lesson he’s gleamed, and definitive proof that Gambino’s come a long way in a very short time. –Chris Coplan 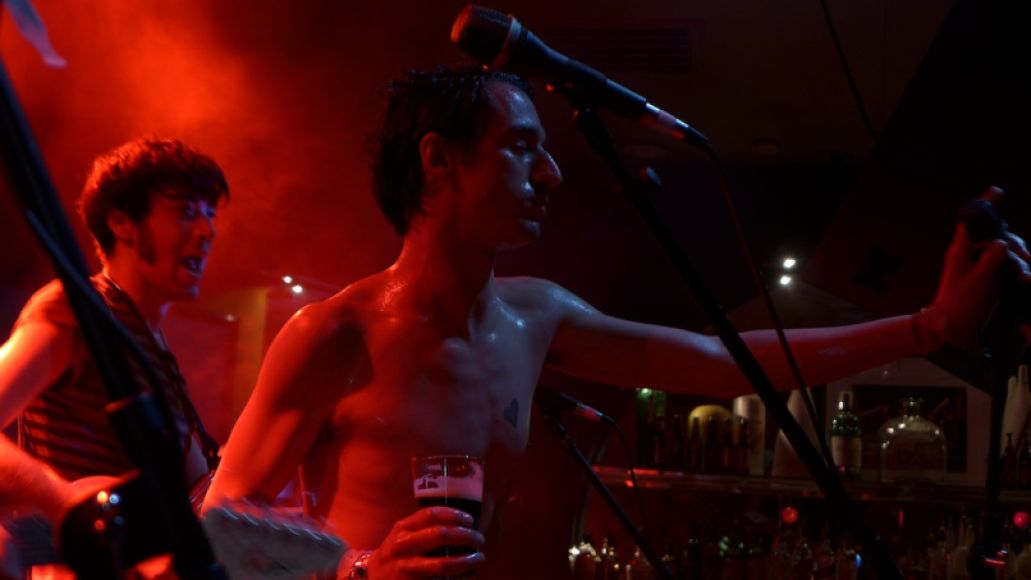 this band looks like the movie napoleon dynamite I'm so upset

HE IS SEMI ERECT

how did this happen to me

I think I found the worst band 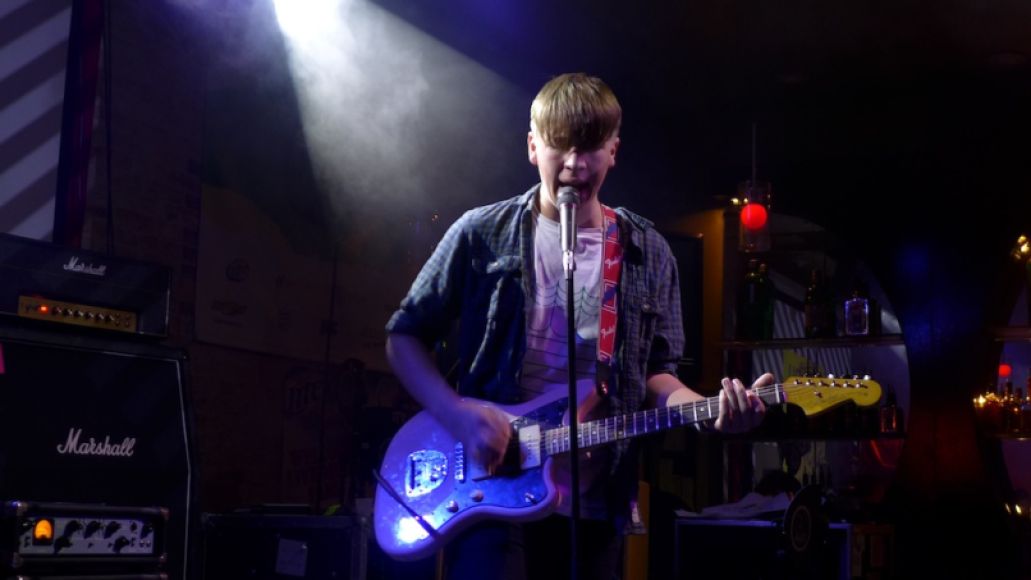 Drenge only sound fun for a moment. The guitar-and-drum duo match the volume and the roughness of the most carefree punk on the planet, but there’s a dead weight hanging from their warped neo-grunge. During Saturday’s final slot, Drenge unwound song after bristling song into the dark and dirty corners of Latitude 30.

Eoin Loveless, who probably takes his name from another western European group that likes to be loud, might be England’s answer to Ty Segall, though he’s laden with a post-punk bleakness that California’s garage rock golden boy would never touch. Drenge’s self-titled debut was a bitter breakup record that got downright nihilistic at points, and that darkness loomed even higher when Eoin and his brother Rory got to play it out loud.

Eoin isn’t much of a technician on the frets, but he navigated a pile of pedals to cast a slant on his guitar and build it into a shuddering noise vortex. The music was heavy and slow; I watched two men translate the urge to mosh into a drunken, intimate slow dance. With the immense closer “Let’s Pretend”, Drenge shook a club that had already been cracked at the seams. –Sasha Geffen