In many ways, the music industry is a lot like the world’s geo-political infrastructure. Labels are the countries, bands are the citizens, and albums and merchandise are the goods and services that make up a given “country’s” gross domestic product. Just as the rest of the world’s breakdown of individual citizen’s wealth is greatly stratified, so too are there sizable gaps in the incomes of bands/artists across the musical spectrum. As a new report by MIDiA Consulting has uncovered, the top 1% of all artists earn 77% of all recorded music income. 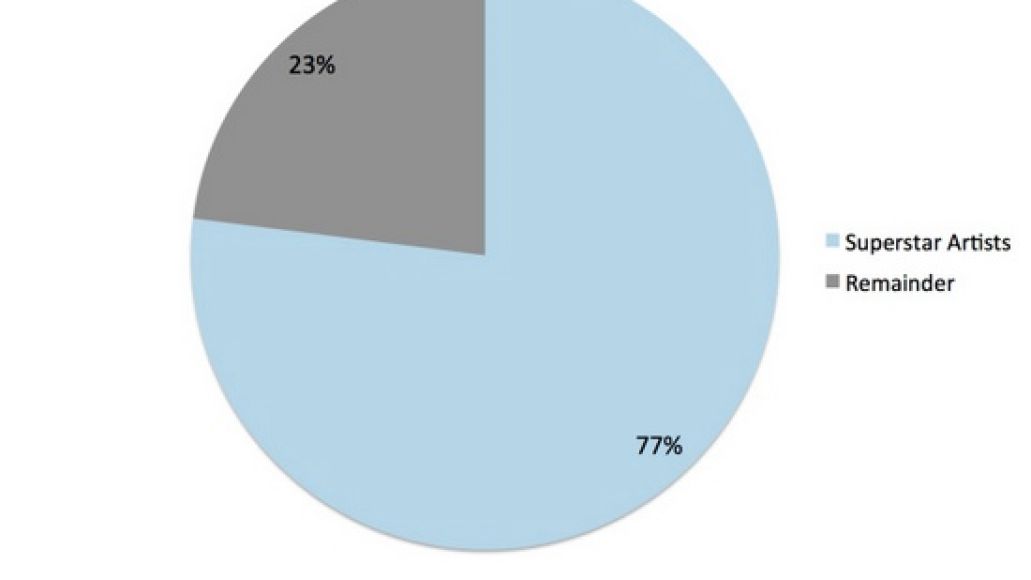 According to the report entitled, The Death of the Long Tail: The Superstar Music Economy, the disparity is complicated by recent developments in the industry. While the income from all recorded music fell by over a billion dollars between 2000 and 2013, artists’ share rose from 14% to 17% in the same span of time. Still, as the report explains, the disproportionate incomes stem from the behaviors and attitudes of fans/consumers, who, instead of embracing the plentiful choices brought forth by the digital music revolution, “have actually been completely overloaded by it.”

The concept of the long tail seemed like a useful way of understanding how consumers interact with content in digital contexts, and for a while looked like the roadmap for an exciting era of digital content. Intuitively the democratization of access to music – both on the supply and demand sides – coupled with vastness of digital music catalogues should have translated into a dilution of the Superstar economy effect. Instead the marketplace has shown us that humans are just as much wandering sheep in need of herding online as they are offline.

In fact digital music services have actually intensified the Superstar concentration, not lessened it (see figure below). The top 1% account for 75% of CD revenues but 79% of subscription revenue. This counter intuitive trend is driven by two key factors: a) smaller amount of ‘front end’ display for digital services – especially on mobile devices – and b) by consumers being overwhelmed by a Tyranny of Choice in which excessive choice actual hinders discovery. 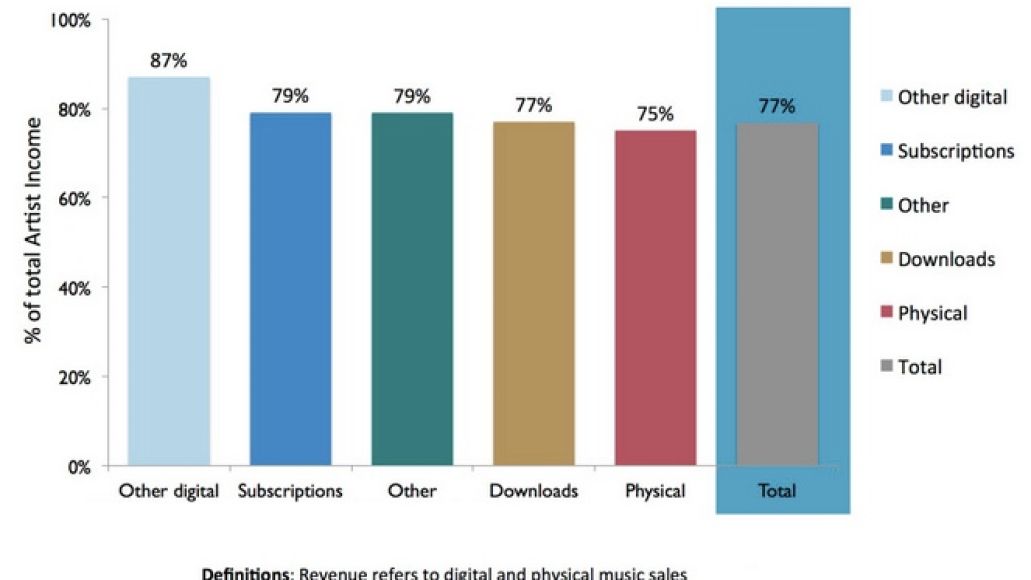 If anything, the report concludes that the digital revolution has only helped to make the financial divide that much greater. The greatest culprit, though, are streaming services like Spotify, Pandora, and Rdio, who are engaged in a “catalog arms race which has become entirely detrimental to consumers’ digital music experiences.” With so many options, and too few authoritative voices, author Mark Mulligan says there has to be a culling of music to equalize the financial landscape:

Action needs taking urgently to make sense of 25 million songs, not just through discovery and editorial, but also by taking the brave decision to keep certain types of content, such as sound-alikes, outside of music services’ main functionality.

Until labels, distributors and artists come to together to fix the issue of digital catalog pollution – sound alikes and karaoke especially – the Tyranny of Choice will reign supreme, hiding 99% of artists under a pervasive shroud of obscurity and giving the Superstars another free lap of the track.

Still, as Mulligan points out, streaming services aren’t inherently bad; if used properly, he explains, they can help truly devoted music fans to find a well-spring of new acts while helping to redistribute the wealth, as it were.

Ultimately it is the relatively niche group of engaged music aficionados that have most interest in discovering as diverse a range of music as possible. Most mainstream consumers want leading by the hand to the very top slither of music catalogue. This is why radio has held its own for so long and why curated and programmed music services are so important for engaging the masses with digital.

Music has always been a Superstar economy and there will always be winners and losers in music sales, with the big winners winning really big. Over time the improved discovery and programming in digital music services should push the needle for the remainder artist tier but a) it will not happen over night and b) it will still have a finite amount of impact.

To read the complete report, head here. Below, enjoy a classic song that this writer feels is especially appropriate given the news.