One of my earliest musical memories was sitting in my parents’ grocery basket, singing to myself a toddler-style rendition of “That’ll Be the Day” by Buddy Holly. When I came up on the titular line “that’ll be the day when I die,” I shied away from singing it. It was an uncomfortable acknowledgment of mortality. In some ways, that’s what Buddy is, too. His death is as much a part of who he is as his phenomenal body of work.

But, what if that wasn’t the case? What if on February 3rd, 1959, the little charter plane carrying Holly, Ritchie Valens, and the Big Bopper had just kept flying instead of crashing in a cornfield? Or maybe we chose a world where Buddy had been a little bit less fastidious about doing his laundry and had just taken that broken-down tour bus to the next town instead of trying to make it to the hotel early to do a load of wash.

We reached out to several Hollites — specifically, senior staff writer Len Comaratta; Penn State Professor of English and Integrated Arts Ken Womack; and Nashville musician Robert Gay — and pieced together an Alternate History where we hypothesize: What if Buddy Holly hadn’t died? 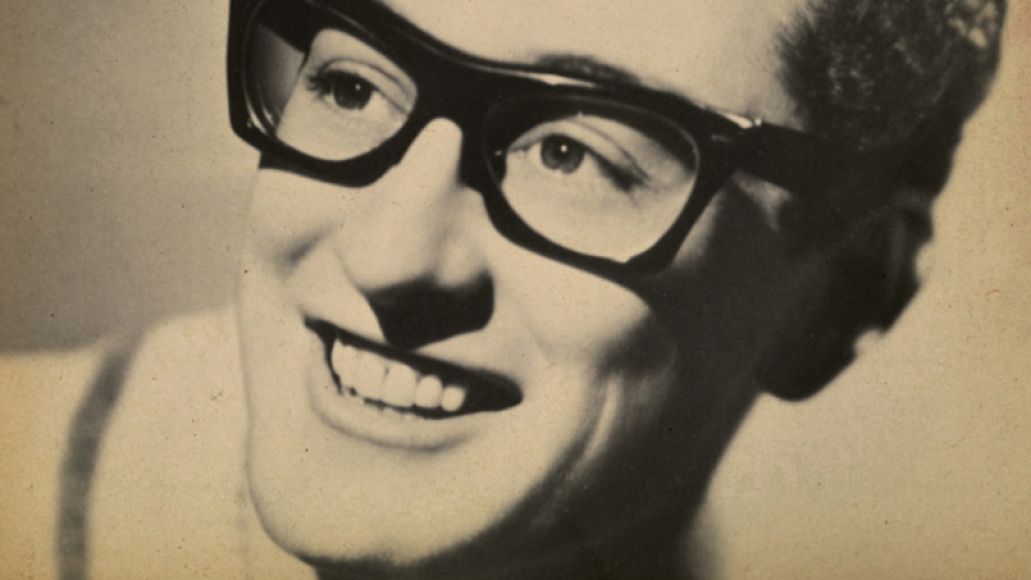 Erin Carson (EC): When he died, Holly was on a slight down swing. Like the Everly Brothers, he was just past that first burst of rock and was looking for what to do next. With the British Invasion a few years away, I’ve wondered what he would have done to stay relevant.

Len Comaratta (LC): Surviving the British Invasion would have been no problem if he had the right backing (record company and management). He’d probably land at CBS or Atlantic at some point and from there been able to achieve his dreams of producing. The latter if he had pursued his dreams of working with soul artists. The idea of Holly working with Jerry Wexler gives me a tingly feeling.

The biggest thing that would have held him back was his dislike of authority and strictness in the studio, which he felt stifled creativity. An earlier Brian Wilson if you will. Maybe Holly would have made the album that made Wilson make Pet Sounds, which made McCartney make Sgt. Pepper. If anything, Rubber Soul would have certainly been a different album. He probably could have worked with a lot of the British Invasion groups, especially the Beatles, maybe the Kinks.

Ken Womack (KW): There’s been a concerted shift over the last year of his life. The Crickets have receded; they’ll be the fake Crickets for the Winter Dance Party Tour. He’s moving into this orchestral period, and he’s only 22. What I always think about as a parallel to this is the Beatles. The Beatles go through their rock ‘n’ roll phase. They shift very quickly into a Dylan-infused folk period with the acoustic guitars; it lasts for a couple of years. Then they re-gather up their senses, and they take rock ‘n’ roll towards psychedelia and experimentation. They exhaust that and come out on the other end with rock ‘n’ roll again, reignited, more high octane.

The point I’m trying to make is Buddy is working a very similar arc… I think what might have been was going to be quite substantial and paradigm shifting in many of the same ways the Beatles were… He’s an enormous talent and was probably going to be, like the Beatles, sort of Gershwin-like in his ability to transcend generations. 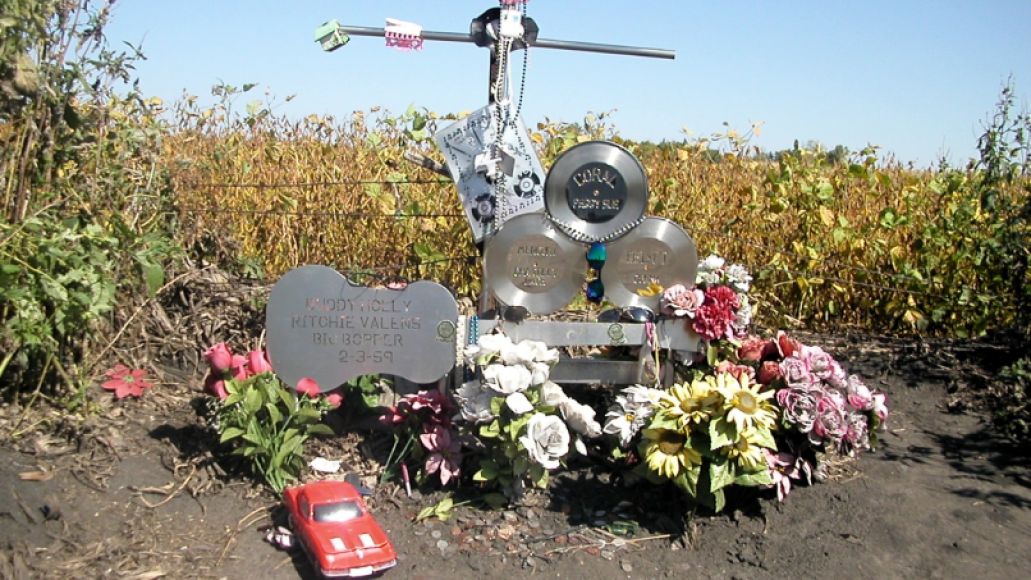 EC: And as part of that career evolution, there’s also been much talk of how Holly was saving money to start his own label.

KW: He had just begun what I’m sure we would have called the “New York Period.” As you said, he was taking a very strong interest in the business aspects of his career, and he was doing it, again, at such an early age. He’s way ahead of the Beatles in terms of being concerned about where his money is going, but we know that Norman Petty was not long for this world. Buddy was going to ditch him at any cost, no matter how significant it was. As you already noted, he was working toward his own label. He was probably going to not only be involved in his own music, but in the spearheading of music of others, almost certainly. He had that much energy and excitement about his business and his profession.

LC: The New York Period would have certainly affected the folk movement in the Village where Holly had moved. His final sessions a few months before he died also featured his first orchestral work. Imagine Holly working with an orchestra a la Miles and Gil Evans in the ‘60s, only with rock ‘n’ roll and not jazz as the base.

Robert Gay (RG): I think we can piece together the path Buddy might have taken by looking at the careers of artists like Nick Lowe, John Lennon (though he too was an early loss), Lou Reed, and Jack White. Buddy Holly would probably have passed down his bold and careful craft firsthand, and I suspect that he would have wound up working with at least several of the musicians who mourned him.

KW: I love what your other friend had said about Jack White. What a great way to think about it. I listen to Jack a lot. Imagine if Buddy had ever had the kind of freedom that Jack has just through home recording, and to be able to have that kind of fidelity and that kind of access to equipment and sound. The sky’s the limit. Buddy Holly is the kind who would still be working.

Very much like Paul McCartney is working class, brought up to make your way in the world, and was doing it just stupendously, he was very close to being able to call the shots. He might have very well built an empire like Quincey Jones, would have had a future in production. Everyone who knew him would talk about his nurturing side. 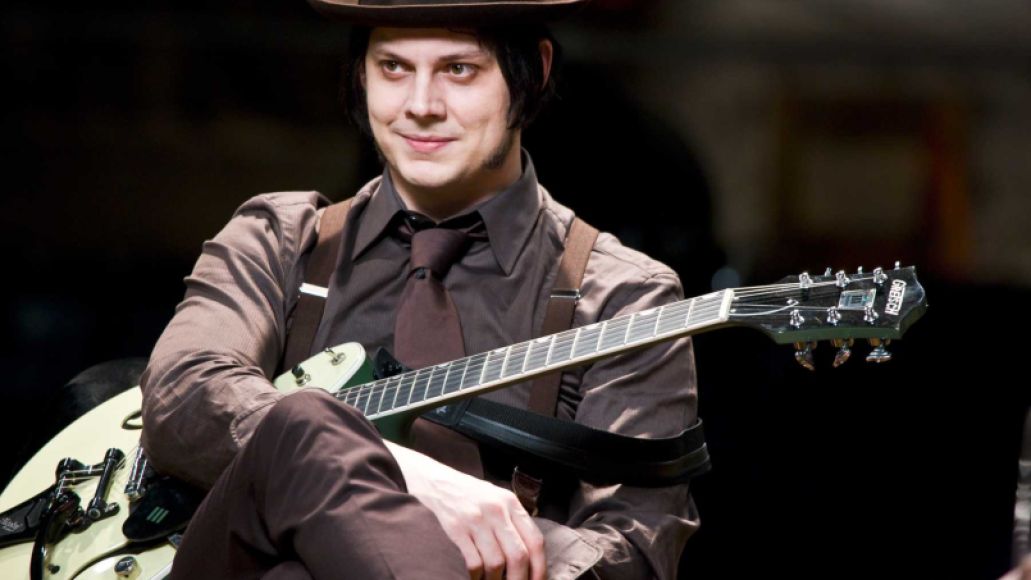 LC: I could see him with Jack White. I mean, he’d be up there in age, but so were Loretta Lynn and Wanda Jackson. Elvis Costello in the late ‘70s/early ‘80s would have been cool (not the late ’80s, though. With the way records were produced then, it would have been horrible. “Oliver’s Army” as done by the Fabulous Thunderbirds gives me shivers). But they probably would not have gotten together until Costello mellowed in the late ‘90s, which eventually led to albums like North and his work with Burt Bacharach.

EC: So, Buddy in the studio.

KW: The master recording of “True Love Ways” is one of the best things ever recorded. When you listen to it, make sure you listen to the full version where you can actually hear him getting the pitch from the orchestra leader. It’s a staggeringly high-quality recording. He was an audiophile. He was interested in high fidelity, and I think he would have been absolutely fascinating as he moved forward with experimentation and tried to use the studio as a larger place.

EC: I also wonder about his songwriting. Maybe he would have had a moment like Sam Cooke, for example, writing a song like “A Change Is Gonna Come” in contrast to previous lighter material.

KW: You need to look at his songwriting arc. He starts off with country and western, rockabilly; he starts turning that into a rock ‘n’ roll sound. His last major recording session was October 1958, when he recorded “True Love Ways”, which to me is a signpost in his career. It’s such a magnificent, big tune.

LC: His group was also one of the only white groups to play black theaters and clubs, including the Apollo. The Civil Rights Era would have certainly had an effect on Holly, especially him being from the South. His music would have probably become a bit heavier and darker and not so much “all my love, all my kisses…”

EC: Part of what we think of when we think of Buddy Holly is his mythology and aesthetic.

RG: Before Buddy Holly, there were no weirdos, no geeks, no one to claim rock and roll for the outsiders. When everybody else was racing off in their cars and hitting the beach, Holly was this skinny, reedy singer who had the guts to be wistful, sad, and vulnerable. Feeling was everything in his music, and I think that’s one reason why his early death was mourned so deeply.

KW: I think Buddy’s death certainly created a belated mystique, but it didn’t happen right away, and of course we can’t divorce ourselves from it. If we really try to pull back from all of the fame he’s enjoyed, particularly beginning in the mid ‘60s, all the way through, and then exploding with that Don McLean song, what I think we find is that he was on a trajectory toward something greater.

We probably don’t celebrate him in the same way because he went out sort of like the Titanic–explosively and hugely, all at once. It’s just part of the story. But if we try to, I think we have to admit that he wouldn’t have been quite as angelic, but he was on a trajectory toward something else that we can never know.

And, back to reality…

What if Buddy Holly Hadn't Died?