These days, Dan Caffrey is obsessed with album art, going as far as to rank the cover of every album Consequence of Sound will be reviewing this year. Hence: Album Art of the Month. Each month, Dan picks his favorite artwork and then talks to the visual artist about working on the record, their history with the band, and anything else that might come up. Come December for our Annual Report, we’ll then pick our Album Art of the Year.

This past March was the toughest month yet when it came to choosing great album art. The evocative images came in droves, from Liars’ use of yarn as a theme to MØ’s drab piece of bubble gum and theTron-like portal of Trust’s Joyland. But ultimately, we went with Wes Freed’s lush yet eerie gatefold artwork for the Drive-By Truckers’ latest record, English Oceans. Having created every album cover for the band since 2001’s Southern Rock Opera, Freed has made his southern gothic aesthetic as much a part of the music as the songs themselves. When we phoned him at his Richmond, VA, home, we couldn’t resist asking him not only about English Oceans, but several past DBT releases. Oh, and his pet possums, too.

When I first saw the cover for English Oceans, I thought it was the first Drive-By Truckers album since Southern Rock Opera to not feature the Cooley Bird, which has become a kind of unofficial logo for the band. Then I looked closer and saw two of them flying across the sky in the right-hand corner.

The thing about that one is I didn’t do it specifically for the record. It was actually a commission for a mutual friend of ours. Patterson [Hood] saw it and thought it fit with the theme of English Oceans. So, we used it. It’s actually a big three-foot by five-foot hanging-over-the-fireplace type of painting.

Did you add the two birds once you knew it would be the cover of a DBT album?

No, I had already put them in there because he was a mutual friend [and fan of the band].

How did the Cooley Bird come about? The first time I remember seeing it was on the front of Decoration Day.

It evolved out of something I came up with back in the late ’80s, which was a black flamingo. My wife at the time, her best friend, and all of the punk-rock girls were into collecting pink flamingos. I just liked the idea of a black flamingo. So I did some drawings and paintings of [one]. That’s initially how it came to be, but they evolved into something more like a long-necked crow or a phoenix or a dragon or something. It becomes what it needs to be for any sort of given visual situation.

I first did it for Decoration Day, and Patterson called me on the phone; this was before I had a computer or a scanner and could instantly send drawings of whatever I was making. I was telling him about it and said, “Yeah, I’ve got this idea. It’s a sinkhole and an old church in the background, and there’s these two black flamingos kind of dancing around the sinkhole.” There was a long silence. Then he was like, “Okaaay.” And I said, “Well just wait ’til you see it. I think you’ll like it. I hope you’ll like it. I pray you’ll like it.” And apparently he did. 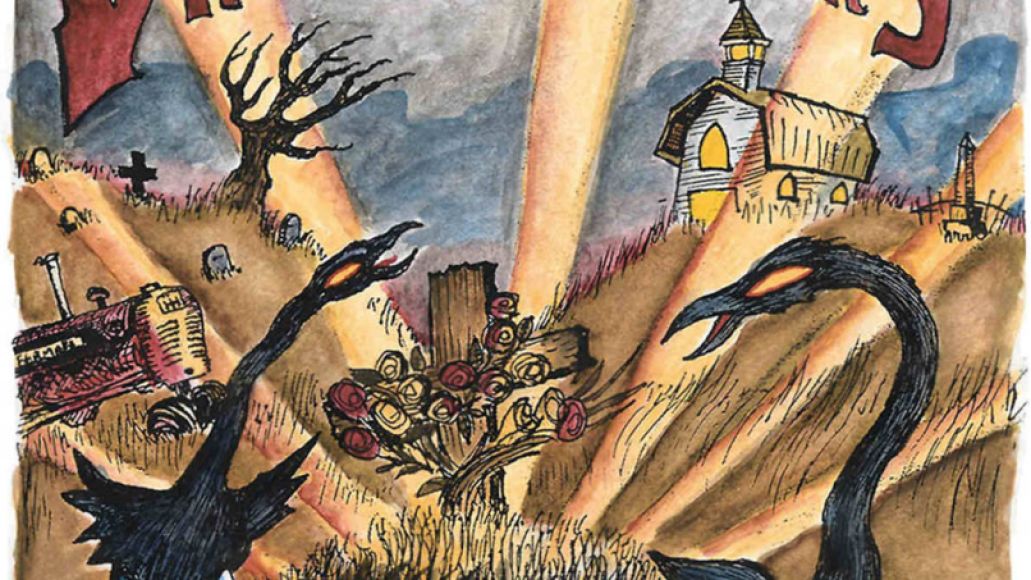 That cover references a lot of specific songs (“Sinkhole”, the title track, etc.), as does a lot of your artwork for other DBT albums. Has English Oceans been the only instance where the artwork came first, then the record?

This is the first time we’ve used an existing piece that just happened to fit in.

Are the three people in the water based on anyone specific?

It’s based on a photograph from Barr Weissman, the guy who did [Drive-By Truckers documentary] The Secret to a Happy Ending. He had commissioned me to do the painting from a photograph of his girls sticking their heads up out of a lake. It’s a really cool photograph and is just basically my take on that.

Is the background the same in the photograph? Are there spooky hills and trees?

No, basically everything except their heads sticking up out of the water is made up.

There’s also a painting of a white owl on the inside of the album. Closing song “Grand Canyon” refers to a white owl and, along with the entire record, is dedicated to deceased DBT comrade Craig Lieske. Is that owl a symbol of him, a sort of spirit that looks over English Oceans?

I’d say that’s exactly what it is. Patterson specifically wanted to use the white owl as an homage to Craig because he had prematurely white hair. Not even grey, just white.

Did Patterson ever refer to him as a white owl when he was alive?

I think that was more of a symbolic thing that came during the writing of the song. I don’t know for sure about that. One of his nicknames was Greythoven because his hair was real wiry and wild like Beethoven’s. 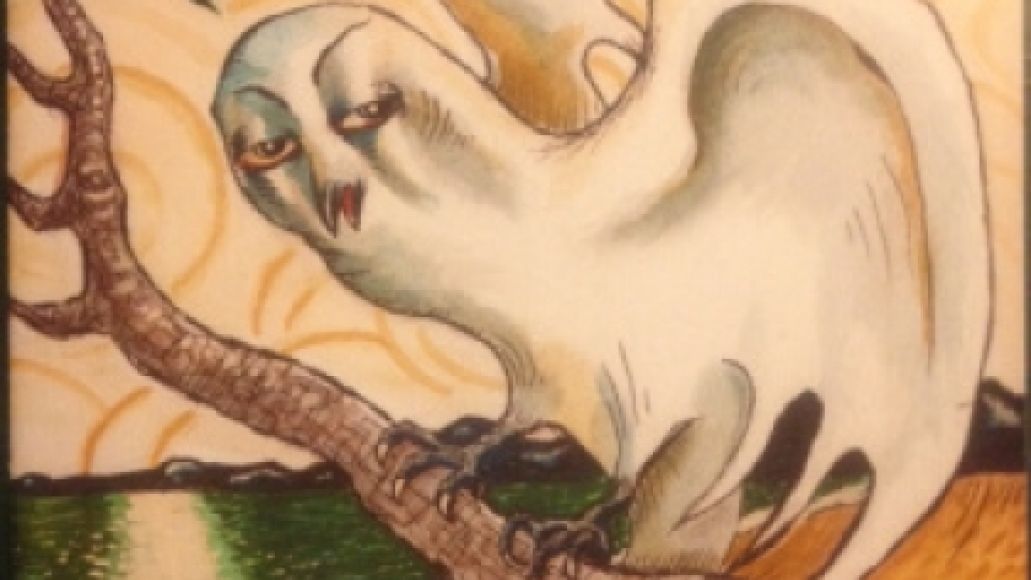 Whenever you include imagery from specific songs in the album artwork, is that because Patterson or someone else in the band asks you to? Or do you just give the whole thing a listen, then decide what you what to paint?

It’s a combination. For The Dirty South, the only thing they told me was they wanted a tornado on it. So, I decided to have the tornado coming out of the smokestack on a train. You know, “It sounded like a train.” [ed. note – a lyric from the song “Tornadoes”] The devil playing poker on a stump in the woods came from [Dirty South opener] “Where the Devil Don’t Stay”.

A Blessing and a Curse, recorded two years later, doesn’t seem to reference any of the album’s songs on the cover. What’s going on with that one? The Cooley Bird is entering what looks like a surreal garden. Is it something biblical?

The plants that are on either side of the bird are mimosa, which is an invasive Asian species. Around here, we call it ghetto palm. It’s a weed that takes over your yard, but when it blooms, it’s really beautiful and smells great. [So] it’s kind of like a blessing and a curse.

Going back to Decoration Day, your painting for Jason Isbell’s “Outfit” depicts a skeletal version of the narrator’s father in the song. Skull aside, is that what Isbell’s dad looks like in real life?

That was more just all the old painters I’ve known and worked with. At that time, I was still working as a house painter, and that was just an homage. I was actually thinking more of [Mike] Cooley, because Cooley was a house painter, too.

Was painting houses at all artistically fulfilling? Were you able to do anything creative with it, or was it more or less busy work?

It was backbreaking and soul-crushing. I mean, there were times when we’d get to do interesting stuff. But for the most part, it was just rolling out walls.

Did you and Cooley ever get to paint houses together?

No, we knew each other, but I think he was living in Atlanta, and I was here in Richmond.

Finally, I have to ask, do you still take care of possums?

No, we had one batch, one set of siblings. We gave the girl away because the boys… when they get to a certain age, they become more than a little incestuous, and they don’t really ask who your daddy’s momma was or anything like that. I gave one to someone else, and she ran away. But we kept the other two from October ’til Easter. When it got warm enough, I took them out to a friend’s farm. They were fun to have around, though. 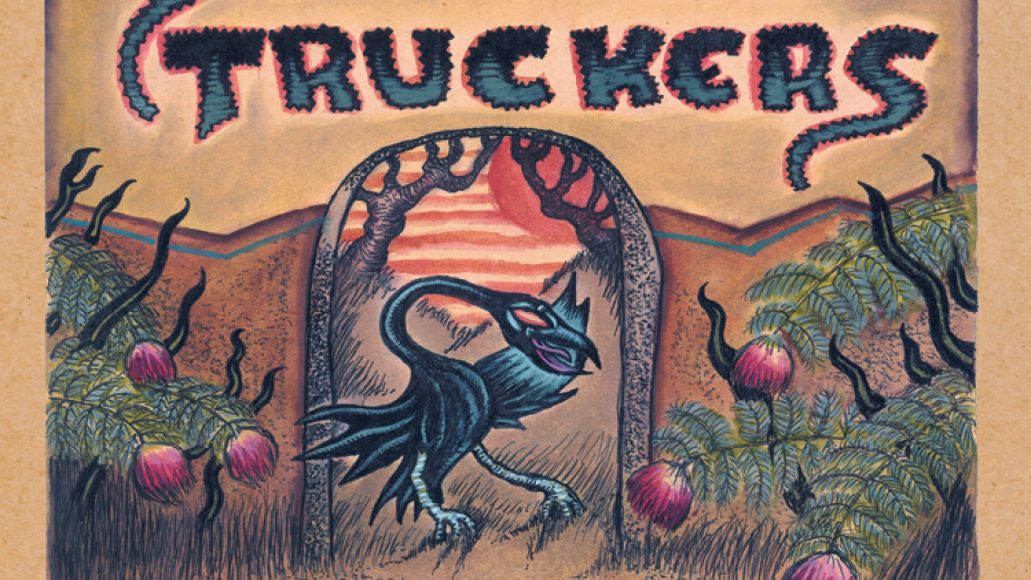 Did you train them at all, or did you just leave out food for them?

We’d play with them and let them crawl around on us and stuff. They’d crawl down in my shirt and try to get my cigarettes, pull my cigarettes out of my vest pocket. I’ve got a picture of me holding up one of them by the tail with a cigarette in its mouth. I’d go to smoke a cigarette and not be able to draw on it, then realize that the filter was perforated with tiny possum teeth. They’ve got like 50 teeth upper and lower, and they’re all razor sharp. They are a little bitey.

Oh yeah, the elephant episode! That one’s great, too. Your comic strip Willard’s Garage centers around an entire community of possums. Where did your fascination with them begin? I grew up in Florida, and they’ve always seemed kind of nasty to me.

I don’t know. I’ve always hated rats, and most people confuse them with giant rats. And it’s like, “No, it’s not. It’s a possum! It’s different! A possum’s a giant marsupial. A rat is a varmint.” But I don’t know, though. I grew up in the Shenandoah Valley, and I fell in love with their big, soulful eyes.

When you took care of them, did they ever get rough with you or each other?

We had to separate them from each other. We had turned the closet into a possum habitat with a branch going from top to bottom, and little shelves and a litter box on the bottom. For them, a litter box is a box of water. You’d put newspapers down on the floor. But after their sister went, they started turning on each other and getting aggressive with one another, so we had to build another cage to keep them separate.

Are you taking care of any other unconventional animals right now?

No, that was the end of that one.

Why the New James Bond Needs to Be In His 30s