I’ve met Dylan Baldi four or five times. And every chance I’ve run into him, his eyes seem to acknowledge that he recognizes me, or at least that’s what I’d like to believe. The truth is that I feel like I’m meeting a new person again and again whenever I shake his hand to introduce myself… and that’s simply because I have no idea who he is. I know he’s the singer of one of the top garage acts at the moment — Cloud Nothings — and that he’s from Cleveland, OH, and that he’s loud and boyish with guitars and that somehow he’s pieced together all of these terrific songs by himself. Yet he remains a mystery to me; in fact, I have a better rapport with the guy who delivers Thai food to my building.

“I’m not telling you all I’m going through,” Baldi sings on “I’m Not Part of Me”.

I can’t help but think about this line as I stumble into Brooklyn’s Luckydog dive bar on a cold Thursday morning in January. The word “quaint” doesn’t exactly do justice to the rustic-with-an-attitude mentality of the place, but whatever, let’s go with it. (C’mon, they allow dogs to run around as their respective owners sip cheap beer and talk about things people talk about on Thursday mornings in January.) When I step inside, I catch the band in the corner, and like an idiot, I walk over to say hello, not realizing they’re in the middle of an interview. They all turn to me — writer included — and offer up a weird death stare straight out of Philip Kaufman’s remake of Invasion of the Body Snatchers. 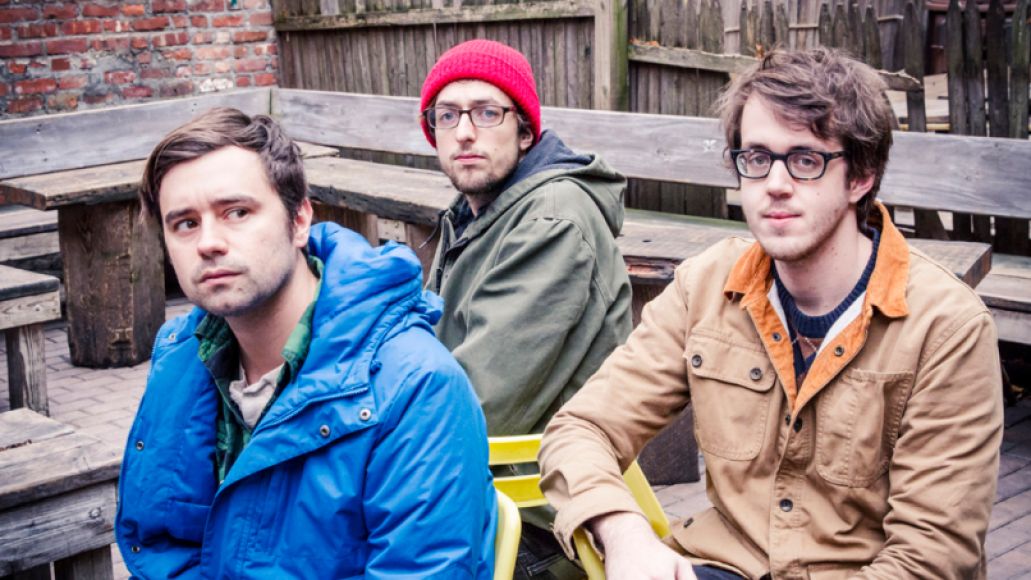 While we wait, here’s a quick recap: In 2009, Cloud Nothings started as a personal hobby of Baldi’s, who spent his weekends recording music on GarageBand in his parents’ basement while attending Cleveland’s Case Western Reserve University. Once he started uploading his music online, he caught the ears of Bridgetown Records, who released the Turning On EP, prompting New York City rock promoter Todd Patrick to invite Baldi’s then non-existent band to open for Woods and Real Estate. By 2010, Baldi signed with Carpark Records, who released the one-man project’s 2011 self-titled debut and the fully operational outfit’s coup de grâce, 2012’s Steve Albini-produced Attack on Memory.

Now, they’re back with their third album, Here and Nowhere Else, and by “they” I mean Baldi, bassist TJ Duke, and drummer Jayson Gerycz. Produced by John Congleton, the album’s an enviable follow-up, a Top-Rated garage rock masterpiece that Philip Cosores insists “is ultimately about survival, making it through the day in front of you, and living with an inherent disconnection from all others.” He’s not wrong. Songs like “Psychic Trauma” and song of the year contender “I’m Not Part of Me” speak less from any tattered pages or scribbled notes and more from a mind that’s bruised and shared by all. It might be the first time Baldi’s actually speaking to us directly, and it might explain why I feel I know him more on record than in person. 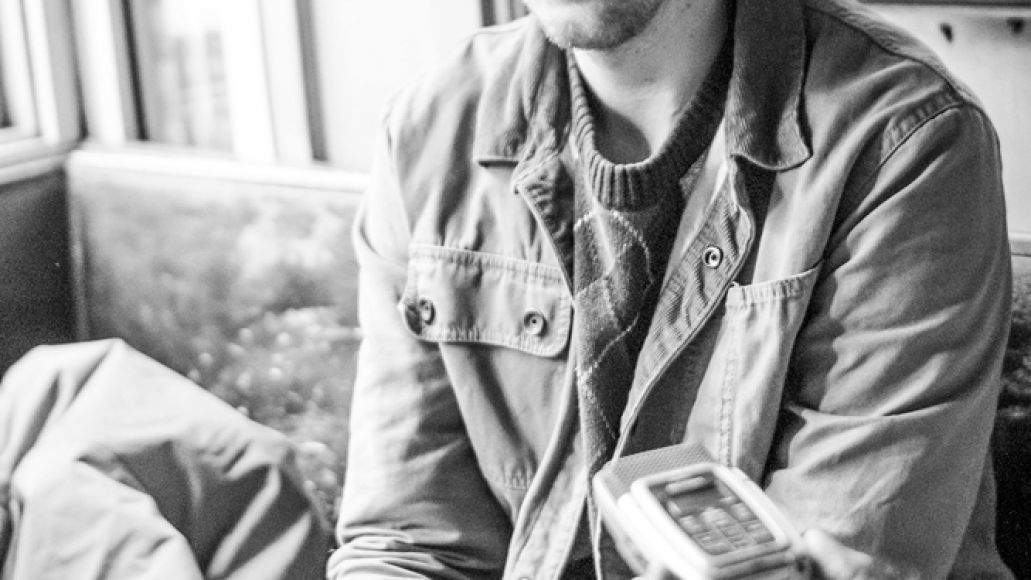 “I have two parents. I was raised in a suburb in Cleveland, Ohio, ended up in college for a semester, dropped out, and then I started this band,” Baldi says, outlining the shortest oral autobiography in rock ‘n’ roll history. “And I’m only 22, so my life hasn’t been much else since then.”

It’s a rough start, and although we’re all frosty from taking photos outside, we’re warming up with pitchers of beer and a few rays of sunshine peeking in through the front window. Little pieces of Baldi unravel: his parents are retired teachers, who both taught in Cleveland’s inner city schools; he started on the piano and majored in saxophone; and he was a former fat kid. As someone who’s also tipped the scale northward, I try to dig a little more here, hoping to connect in one way or another.

“I used to have a license when I was 15, and I was like 240 pounds on it,” he admits, smiling. “I would get denied from venues. People wouldn’t let me into places. They were like, ‘This is a fake ID,’ and I was like, ‘No, it’s not. It’s a real one,’ so I eventually had to get a card for it.” I relate a couple of stories where this exact same situation happened to myself, even as recently as a couple of years ago at Chicago’s Metro for a show I was supposed to cover. I, too, discarded the ID.

He adds, “I was telling someone earlier that I had an AC/DC shirt when I was a kid, because I love them, but they’re all XLs, so I swear to god it just went away, and I couldn’t wear those shirts anymore.”

Throughout the entire hour-long interview, this is about the only tangible intimacy I get from Baldi. We discuss books (“I read a lot”), video games (“Whatever was around, the current system”), his early songwriting process (“I didn’t really know how to write songs; I was just making things and putting them online”), and how it hasn’t changed much since (“I kind of go for it and see what happens; get something that sounds good and just keep going with it.”), but we never connect like that again. Instead, I switch gears and start revisiting a few anecdotes from past shows of theirs.

One thing that always sticks out at any Cloud Nothings gig is how much energy the three expel during each performance. Baldi spits his intestines into the microphone, Duke chisels down his fingers to little stubs, and Gerycz dissolves his kit. Out of the five or six times I’ve seen them, they’ve never appeared sluggish, blazing through vast stretches of guitar instrumentals or six-minute drum solos with due cadence. In fact, the only time I’ve ever seen their pace even slightly skip was during a sweltering 30-minute set at Louisville’s Forecastle Festival in 2012. As the Southern sun glazed the stage, Baldi’s skin appeared blue and gangly as he hustled back and forth no different than Day of the Dead‘s Bub.

“I think my amp melted, too, from the heat,” Baldi recalls. “After that show, I needed to change shirts really badly, and someone said I could change my shirt in the trailer nearby. So, I walk in and Wilco is in, and I just saw Jeff Tweedy and he was like, ‘What are you doing?’ They let me change! Wilco is nice.” 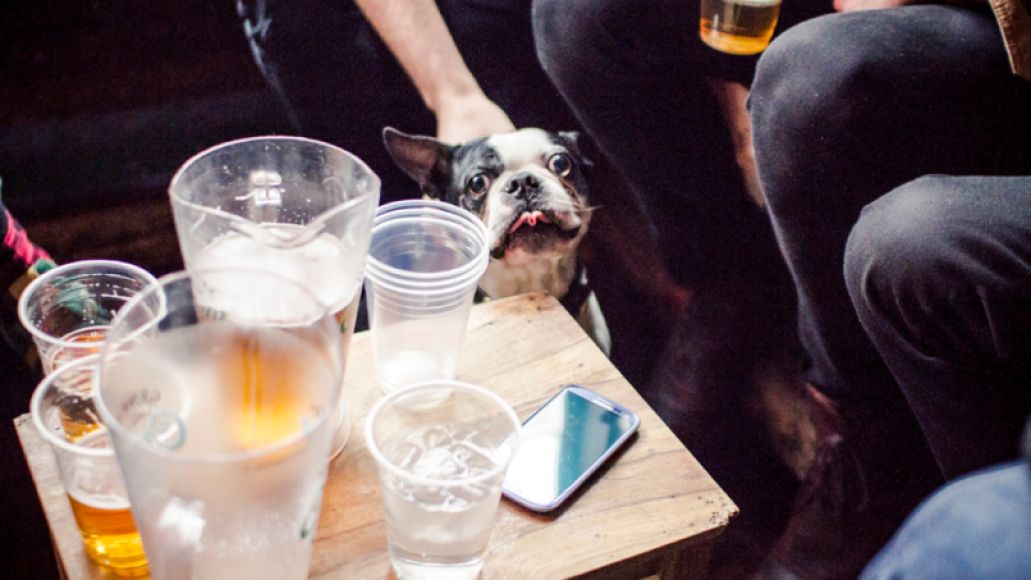 A cow-spotted French bulldog shuffles into our corner. Rather surprised, we all laugh and pet the pooch as it sits on Duke’s feet, comfortable and seemingly feeling like one of the guys. Beers are sipped, a short discussion about steam punk is kicked around by Gerycz, and then we’re talking about the new album. After all, they’re only hours away from unveiling it live at nearby Brooklyn club Baby’s All Right.

“The whole record is about just taking separate influences and being yourself from those influences, like creating your own life,” Baldi says. “All the songs deal with that.” That carefree ethos is something that he attempts to apply to everyday life. He adds, “I think all of us just do what we want most of the time.”

Two pitchers later, the sun shifts in the window and the sky’s yellows turn grey. It’s definitively winter out there, and there’s an abrupt solace to the silence that settles after a drawn-out, somewhat tenuous conversation. We chat about classic rock — Black Sabbath, Zeppelin, and Pixies — and even speculate about the next season of Game of Thrones. It’s a boring scene, really. There’s absolutely no anxiety about the album’s live debut, which, spoiler alert, they perform to great effect, and whatever demons they possess are ignored for a later exorcism. Baldi shares a few last thoughts, smiles, and I leave. 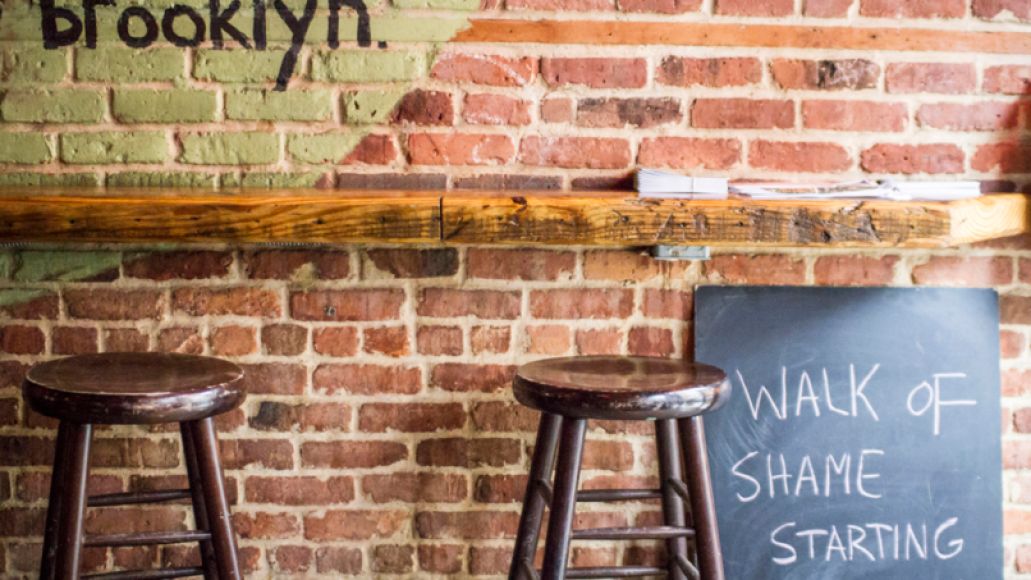 “If I look around at people my age right now, I see a lot of confused kids not sure what the world really has to offer them, or not sure of their place in that world,” Baldi explains in an e-mail weeks later. “That disturbs me, and it’s a pretty endless source of lyrical content. [Here and Nowhere Else] is less angsty than prior ones, there’s a sort of faux-existential “que sera sera” thing going on. But that’s just where my head is at now.”

And that’s when I realize he’s just as confused as I am.