As spring fast approaches, the ramp-up to the summer blockbusters has already begun. This season will see Marvel characters flying across the silver screen in four separate films from three different studios. The first from Marvel Studios, Captain America: The Winter Soldier, set for release this Friday, is being described as a gritty ’70s-styled political thriller and action film and has already garnered praise, including nods for being an even better film than Marvel’s juggernaut The Avengers.
j


Marvel’s second release as part of its Marvel Cinematic Universe will be Guardians of the Galaxy, a rough and tumble “Cosmic Avengers” that puts five irascible, highly volatile, and very self-centered individuals together in the hopes of saving the universe (as well as closing Marvel’s Phase Two of the studio’s long-term cinematic goals). The studio is taking a big gamble with the film, and many wonder if there’s an audience for it. Still, Kevin Feige, President of Marvel Studios, likes to point to the loud naysayers that whined when Marvel initially announced plans to make an Iron Man movie. How’d the third one do at the box office last year again?

Come May, Spider-Man will swing across the silver screen for a fifth time in the rebooted series sequel, The Amazing Spider-Man 2. Shortly after, the mutants will take over with X-Men: Days of Future Past, a landmark tale in the comic’s mythos that will feature members of X Teams from the original trilogy of films as well as versions of their younger selves as introduced in 2011’s X-Men: First Class. Suffice it to say, this summer will certainly be Marvel-ous. Sorry, DC fans. This summer just isn’t for you. Don’t worry, though. Batman and Superman will return fairly soon.

Because we’re music fanatics by day and comic nerds by night, we thought it would be fun to uncover bands, rappers, producers, et al who found themselves inspired to a degree by comics — whether it’s taking their name from a franchise or lifting something straight out of their legendary inked pages. Ahead, we detail some of the DC and Marvel titles that found their way into the world of rock and hip-hop (along with some independent and imprint titles that followed suit).

Who knows, maybe it’ll motivate you to visit your local independent record store and nearby comic shop. 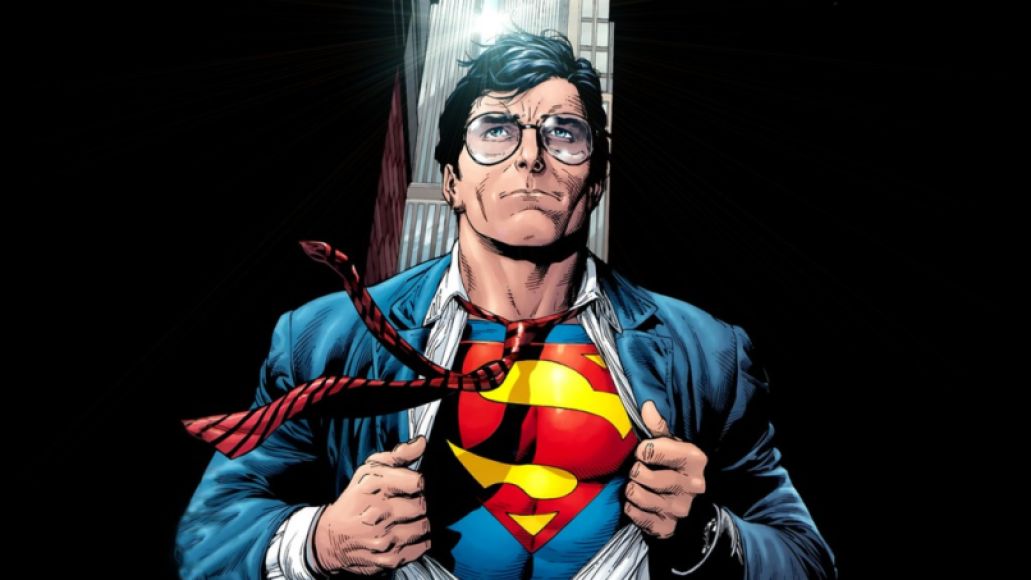 Rodgers and Hammerstein once suggested that the best place to start is at the beginning, so if we’re discussing comic book characters and musicians, then perhaps the best place to tip off is with the first superhero (and according to an IGN poll – the greatest of all time): Superman. In this case, however, it’s more of a focus on Superman’s bespectacled alter ego, Clark Kent, the mild-mannered reporter for the city of Metropolis’s major newspaper, The Daily Planet.

Created by Jerry Siegel and artist Joe Shuster, in high school no less, Superman went through a series of rewrites before he first graced the cover of Action Comics #1 in April 1938. (At one point, he was a bald, telepathic villain bent on world domination — sound familiar?) Inspired by the films of the day, Clark Kent took his name from actors Clark Gable and Kent Taylor, while his physical appearance was inspired by legendary silent film comedian Harold Lloyd and Shuster himself.

Rodolfo Franklin derived his own alter ego, DJ Clark Kent, after leading a crew of DJs called “The Supermen”. In the mid-’80s, he began his career with Slick Rick compatriot, rapper Dana Dane, though he would go on to produce a few vital records — specifically “Player’s Anthem” (feat. Notorious B.I.G. and the debut of Lil’ Kim) and Original Flavor’s “Can I Get Open” (feat. a young Jay-Z). Later, he would produce three tracks for Jay-Z’s debut, Reasonable Doubt, and receive praise on Jigga’s “My 1st Song”.

Outside of producing, Kent worked at Atlantic Records as a director of A&R and assisted in the birth of Roc-A-Fella. Though, not all is golden in Kent’s musical Metropolis. After all, he was instrumental for introducing young rap hopeful, Jamal Barrow, aka Shyne, to Bad Boy Records mogul Sean Combs. And if you recall, that didn’t end up too well for Shyne, who served nine years in jail and was eventually deported after taking blame for a shooting incident in NYC allegedly involving Combs.

Lately, Kent’s been focusing on his costume, having designed a special, limited-edition pair of Nike Air Force 1s. Needless to say, Jor-El would be proud. –Len Comaratta

From Ink to Sound: How Comic Books Influenced Music