As a Jersey boy and graduate from Monmouth University (then Monmouth College) circa 1969, I had the rare opportunity to see Bruce Springsteen in his early days, back when he was really beginning to take off with the E Street Band. Even compared to those halcyon memories, last night’s performance at the BB&T Center in Sunrise, FL (a far cry from the Northeast, mind you) was just outstanding. Although the performance piled on the nostalgia – what better trip down memory lane than to hear rare covers of John Lee Hooker’s “Boom Boom” and Southside Johnny’s “Talk to Me” — I could also feel where Springsteen has been throughout his career and a glimmer of what’s to come.

In addition to a career-spanning setlist of the hits and modern hymns, Springsteen had a couple of surprises for his adoring fans. Early into his three-hour performance, he asked the audience, “Are you ready for an E Street Band premiere?” After some near-deafening applause, he proceeded to play a rocky rendition of “Linda Let Me Be the One” for the first time ever, only to revisit it once more after joking: “Man, we really fucked that one up!” Per tradition, Springsteen reached into the audience to pull up signs and comment on them. One sign from a fan asked whether or not he could hook her up with his son. “You know you’re getting old,” he started, “when people start asking if your son is available!” Another woman’s dreams came true when he called her up on stage to dance with him while he played “Dancing in the Dark”, which was #153 on her bucket list according to her sign. Later, he even launched himself backwards into the audience, where he was carried by the crowd for nearly half the length of the ground level before being returned to the stage.

Over the years, I’ve long committed his discography to memory, in addition to a number of his past performances. Last night, however, The Boss made it clear (at least to me) that he has never stopped growing as an artist, and he has never stopped appreciating the countless people — over 17,000 in that arena alone — who have pushed him to where he is today. Because of this long-storied allegiance, Springsteen has carried many titles: The Voice of the American Proletariat, The Man in the Business of Love, The God of Rock. On April 29th, 2014, he proved worthy of each one of them.

But maybe that’s how he rolls every night. 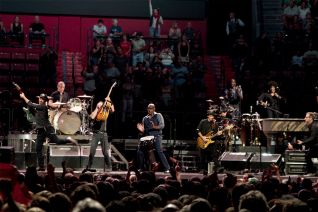 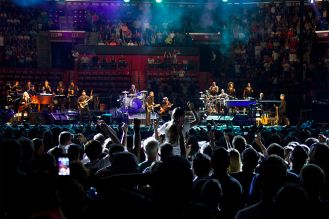 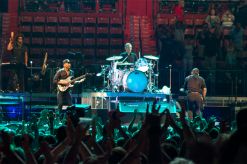 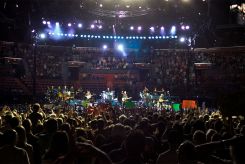 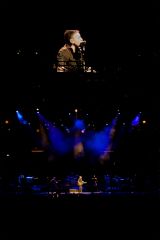 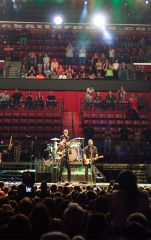 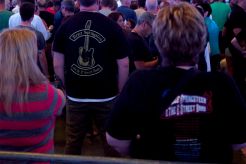 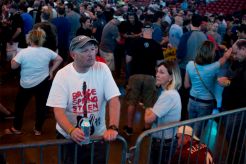