Seated high up at London’s O2 arena, it was little surprise that most of those around me boasted strong northern accents. After all, two of the north of England’s favourite sons were on hand to dispense the kind of homespun wit and wisdom characteristic of the region, alongside brands of music that play hard with your emotions.

London’s iconic 20,000 capacity venue once housed the infamous Millennium Dome, but tonight it felt transported to the suburbs of Manchester. Yet the crowd was disrespectfully sparse as Doves frontman Jimi Goodwin and a trio of band mates set off proceedings with the bowel-wrenching opening chord of “Terracotta Warrior”. There is something about the raked elevation of the upper tiers of this auditorium that induces high anxiety when the seats aren’t filled — at worst a momentary craving to cast yourself down lemming-like into the elongated standing area facing the far-flung stage. The venue slowly filled as Goodwin worked brightly through a no-filler nine-song set drawn from his recent solo album with a couple of Doves classics (“Snowden” and “The Last Broadcast”) thrown in. 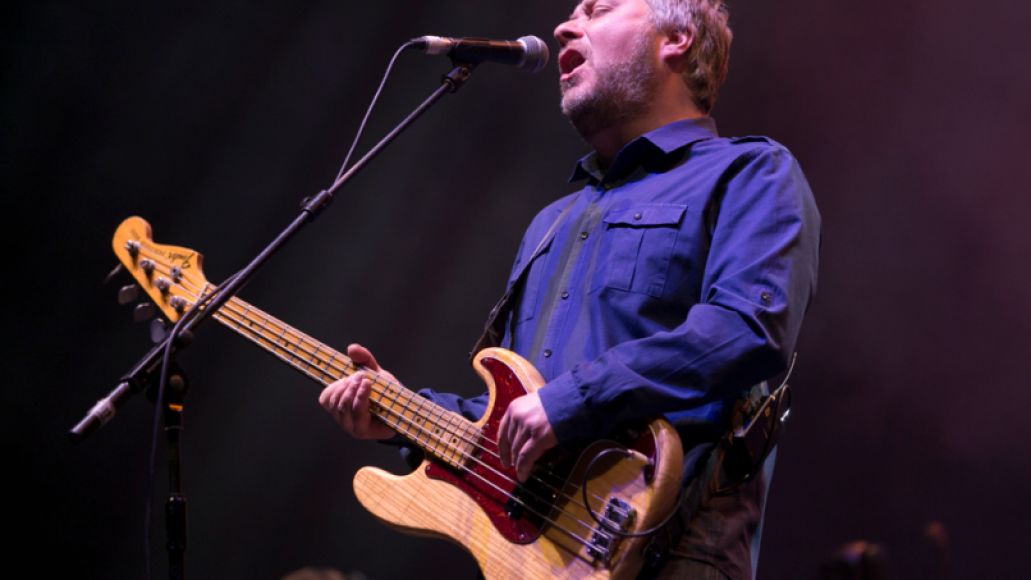 Late comers missed a real treat as bassist and vocalist Goodwin and his tight combo of guitar, keys, and drums did a solid job of recreating the studio sound.The material Goodwin selected from his solo record was that closest to Doves oeuvre, and at times it felt like you were listening to that band, though currently on hiatus — a clear testimony to the significant role Goodwin plays in it. Vocally, he was in fine form, his heart-worn rasp adding texture to an earnest delivery. Instrumentally, his rhythmic, ever inventive bass playing shone on melodic gems like “Didsbury Girl” and “Ghost of the Empties”. Goodwin traded bass for acoustic guitar for the rollicking “Oh! Whiskey” and ended the set on a triumphant note as the rhythmic builder “Lonely at the Drop” reached a crescendo of interplaying synth and guitar.

The band hug and bows that followed Goodwin’s set seemed like gestures of genuine affection that paved the way for the entrance of Elbow to a now almost full arena. After an instrumental intro, Guy Garvey took to the stage like everyone’s favorite uncle, casually strolling down the gangway to the platform in the crowd dispensing customary insights. The rest of the band, augmented by prodigious strings and brass sections, meanwhile melted into the shadows onstage, now and then to be illuminated by some serious lighting. “Charge”, a song from the new album dealing with the grouses of an aging drinker, was a little ponderous as an opener, but the pace was picked up encouragingly on “The Bones of You” from Seldom Seen Kid. 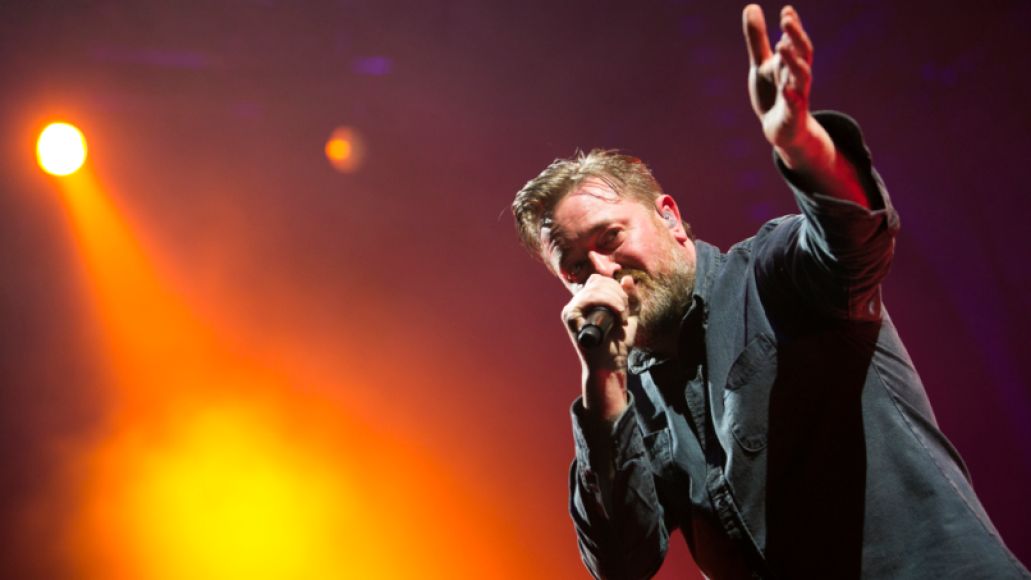 At times, Elbow hit a note of intimacy that cut through the cavernous setting, but for much of the first 10 songs, the audience reaction seemed politely muted; appreciative, yes, but maybe too knowing to lose restraint. New song “Fly Boy Blue/Lunette”, dedicated to the inventor of the trampoline, stood out for its smoothly hypnotic segued transition, while “The Loneliness of a Tower Crane Driver” hit the spot with epic drums countering the isolation of its subject matter. A characteristic of almost all the songs tonight was the way they ended softly and naturally without the need to work through extended codas much loved by bands occupying similar territory to Elbow. Equally Garvey’s operatic baritone glided effortlessly throughout the evening, as clear as the night air. 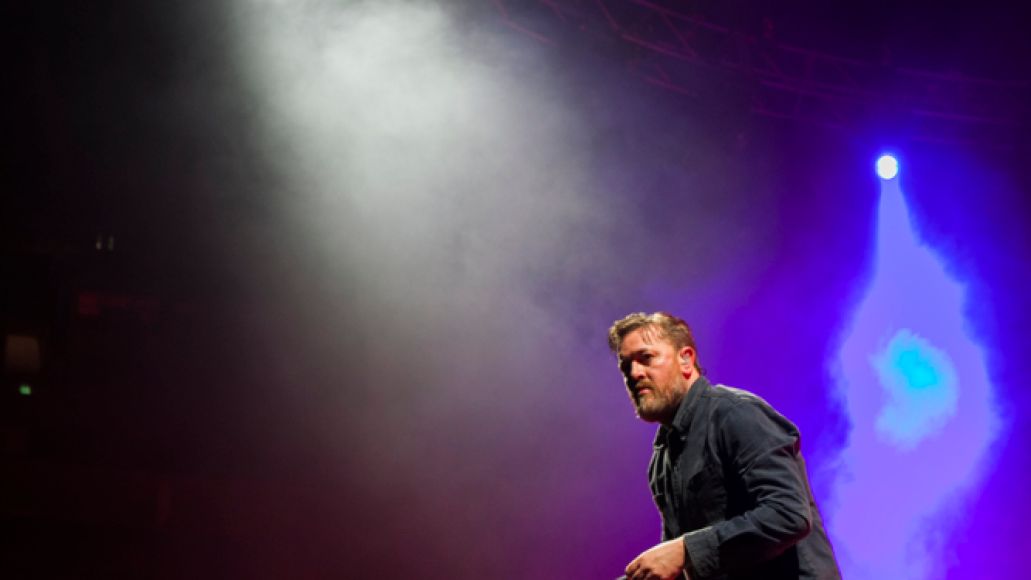 This fostered audience restraint rather than fervor, but after Garvey fruitfully orchestrated a Mexican wave throughout the auditorium, there was a change in the atmosphere. Lighting effects aping the title during “Mirrorball” also seemed to have a liberating effect. “The Birds” built into a proper anthem, and the crowd’s vocal responses to Garvey’s calls in the oddly less than promisingly titled “Grounds for Divorce” was total. The very best was saved for the last in the Shakespeare-referencing shape of “My Sad Captains”. Charting the loss of a group of drinking buddies whose activities are labelled affectionately “what a perfect waste of time,” the song’s terrific melody was emboldened by Morricone-like trumpets.

A three-song encore was lapped up by an audience now totally onside, whistling during “Lippy Kids” and smacking away balloon balls that fell from above. Elbow’s signature anthem “One Day Like This” was finally played out as a communal sing-along that continued way past the band’s exit. It was a fitting demonstration of the pride and passion that Elbow can muster.

Jimi Goodwin Setlist:
Terracotta Warrior
Didsbury Girl
Live Like a River
Oh! Whiskey
Snowden
Keep My Soul in Song
Ghost of the Empties
The Last Broadcast
Lonely at the Drop

Elbow Setlist:
Intro (This Blue World)
Charge
The Bones of You
Fly Boy Blue / Lunette
Real Life (Angel)
The Night Will Always Win
New York Morning
The Loneliness of a Tower Crane Driver
Great Expectations
The Blanket of Night
Mirrorball
The Birds
Grounds for Divorce
My Sad Captains
Encore:
Starlings
Lippy Kids
One Day Like This