How does one accurately gauge the talent of a singer? Unfortunately, there’s no pH test or special scanner to help separate the true songbirds from those that should maybe become a or guitar tech. However, there is one way to determine a very basic idea of any singer’s inherent talent and potential: examine their vocal range. Now, Concert Hotels have put together a handy-dandy chart comparing the ranges of the world’s most well-known singers. The results are possibly more shocking than this guy.

So, just who has the best vocal range, and thus, at least technically speaking, is music’s greatest singer? Why none other than Axl Rose, who has an insane range of five octaves. (For comparison, the world record holder, a man named Tim Storms, has a range of 10 octaves.) Rose beats out a truly jam-packed top five that includes Mariah Carey, Prince, Steven Tyler, and James Brown. I should have seen this coming the first time I heard “Welcome To The Jungle”.

Perhaps more interesting, though, are who comprise the bottom five. Country singer Luke Bryan may have the smallest range, but he’s joined by some A-listers like Justin Bieber, Taylor Swift, Sam Cooke, and Karen Carpenter, who aren’t all that far behind. In fact, the iconic Cooke and the tween-worshipped Bieber actually have near-identical ranges, as do Swift and Carpenter. I guess it just goes to show it’s what you do with what you’re given rather than what you’ve actually got in the first place.

Other interesting tidbits gleaned from the chart:

— Despite sounding like he gargles gravel every morning, Tom Waits has a wider vocal range than the likes of Cooke, Swift, Stevie Nicks, and Björk.

— Despite her status as a vocal powerhouse, Aretha Franklin only ranks in at #37 on the list. In fact, she’s beaten out by the likes of Kurt Cobain, Miley Cyrus, Bono, Bruce Springsteen, and even Thom Yorke. In fact, Yorke ranks among the top 10, with a total range of four octaves.

— There’s plenty of names on the list you wouldn’t expect to have such a noteworthy range: Johnny Cash, Neil Young, John Fogerty, and Rod Stewart.

Check out the full chart below: 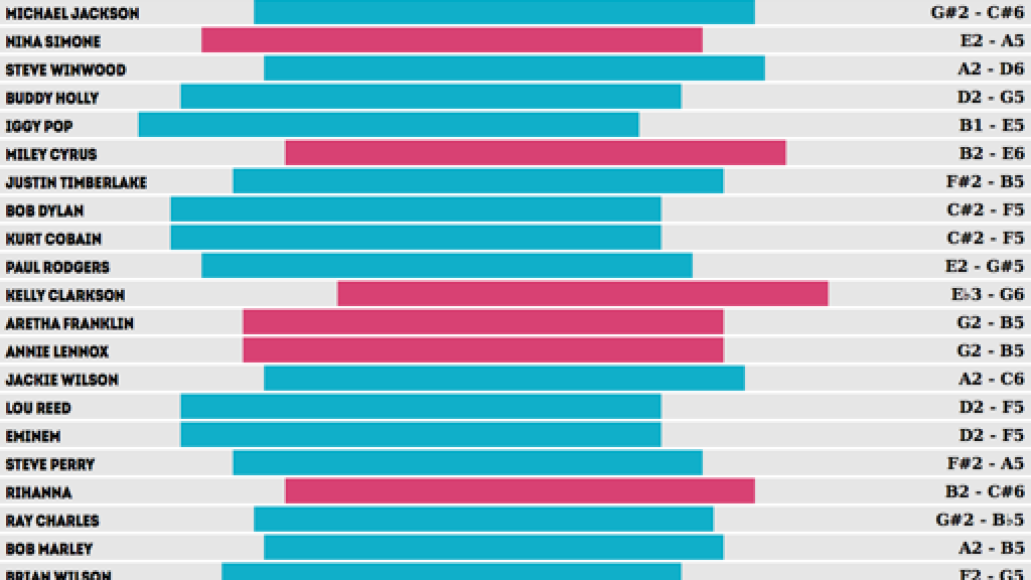 Head over to the Concert Hotels site to tinker around with an interactive version, which also offers up song examples for each accompanying singer. Other artists featured include Beyonce, Tina Turner, Iggy Pop, Paul McCartney, Christina Aguilera, Elvis Presley, and many, many more. Below, enjoy a few samples from the top five.

Axl Rose is the greatest singer of all time -- or, so says this chart