Bob Dylan memorabilia does big business. Just last year, the Fender Stratocaster he played during his history-making appearance at the 1965 Newport Folk Festival earned $965,000 at auction, breaking a Christie’s record previously held by Eric Clapton’s $959,500 guitar. Now, as Line of Best Fit points out, the first drafts of Bob Dylan’s iconic “Like A Rolling Stone” are hitting the Sotheby’s auction block. The expected asking price? Try an estimated $1 to $2 million.

The early drafts see Dylan experimenting with several rhyming sections that were later abandoned for some reason, including the name “Al Capone” with a line to the lyric “Like a complete unknown” and a note that reads “…dry vermouth, you’ll tell the truth”. In addition to the lyrics themselves, the drafts, described as “stray thoughts on American cultural imagery”, feature several “interesting doodles”, including a bird, what’s either a record player or a black hole, a fancy hat, and what I can only describe as a sock-puppet deer.  Each of the four pages is written on the stationary of Washington, D.C.’s Roger Smith hotel. 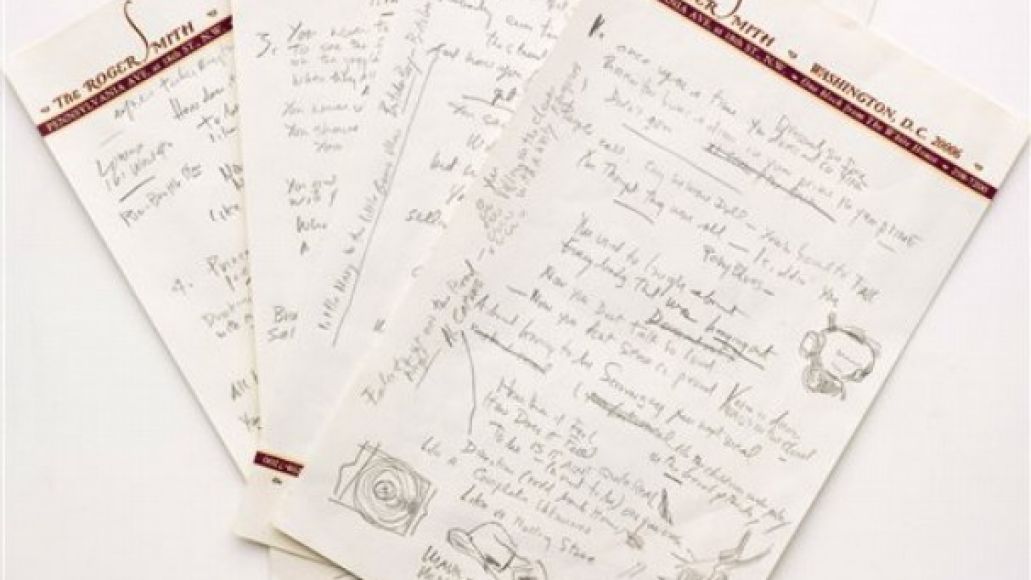 According to Sotheby’s, the lyrics are “the only known surviving draft of the final lyrics for this transformative rock anthem.” The anonymous seller, who hails from California, reportedly “met his hero in a non-rock context and bought directly from Dylan.”

The auction begins June 24th (head here for more info). Now if you’ll excuse me, I’m going to go reconsider moving away from comic book collecting to scouring the Earth for rock and roll memorabilia.