When Owen Pallett meets me at the front desk of his hotel in West Hollywood, we cordially banter through the elevator ride to the bar and restaurant area. Pallett never appears happy during our talk, but he’s not unfriendly either, just professional and aware that he is at work, and aware that I am as well.

Still, he likes giving interviews, saying, “I don’t really talk about my music with my family or friends, so it is nice to talk about myself for a bit.” He even asks me at one point, “How’s my candor level? Am I too candid? Or am I not candid enough?” Truth be told, talking to Owen Pallett is the ideal mixture of thought-provoking, idea-driven dialogue (from him — I just try to keep up) and human interaction. When he asks me the occasional question, he is not trying to be polite, he actually wants to know the answer.

It’s his ability to empathize that connects his personality to his music. Michael Stipe sang the line “not everyone can carry the weight of the world,” but Pallett seems like one of the few who would at least try. On his latest album, In Conflict, he is nearly doing that, examining extreme situations that leave people vulnerable, and these are of the highest interest to the Canadian multi-instrumentalist and composer.

“Part of this is just a symptom of when you have a crazy person in your life,” Pallett says, and I’m not sure what “this” is but I’m taking the ride anyway. “Whether it is ADHD or moments of depression or dysphoria, you have to engage in some kind of affectatious behavior when you’re around them, whether the affectatious behavior is being comfortable with their Asperger’s syndrome or being relaxed with their ADHD or training yourself to refer to their preferred pronouns. All those things are what I want to feel all the time of my life. 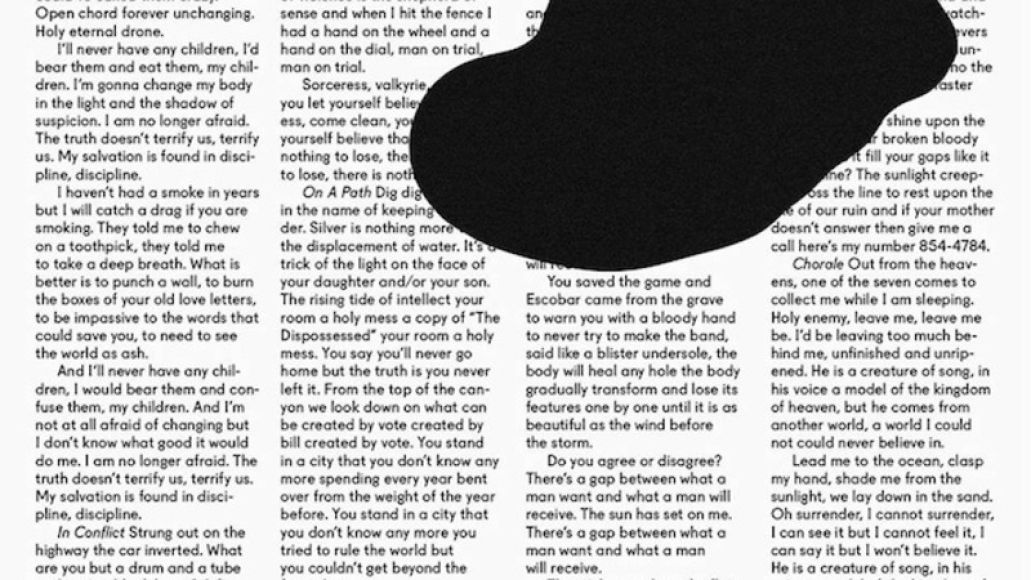 “I never want to be unchallenged in a relationship with a person,” he continues, “and I realized it is something I truly value, even if it’s actual, physical sickness when you have a cold at a party you are like, ‘Why am I here?’ It’s just a constant feeling of being a burden on people around you. So hopefully this record is definitively establishing in the new songs that it is the preferred state of being. Even if it’s just mild negativity, it’s the rejection of normal states of mind.”

Now, before you make the logical leaps, Pallett is quick to qualify that there are no rules or absolutes in his ideas of consciousness, and that obviously some abnormal states of mind can result in really bad things happening. Pallet explains further:

“A lot of this record was written at a time when there was a perceived epidemic of suicides among gay teens, when certain group of individuals decided to blame bullies for what was in my mind a completely normal state of being, the suicidal state, and one that can be dealt with in many different ways.”

Though Pallett seems greatly concerned with the success and stability of others, in groups or individuals, In Conflict is still a personal album with goals that relate to him. A new change of heart encouraged him to make cathartic music — an approach he was previously allergic to.

“What I’ve come to recognize is that many of my favorite songwriters do come from a point of view of catharsis,” he says, “but the songs are so good that you don’t notice. Chief amongst them is Little Earthquakes by Tori Amos, Blue-era Joni Mitchell, and to a degree as well, Red-era Taylor Swift. Finding this balance between showing yourself so listeners might see other people in you, rather than showing yourself for purpose of humiliation or for the purpose of shocking somebody.” 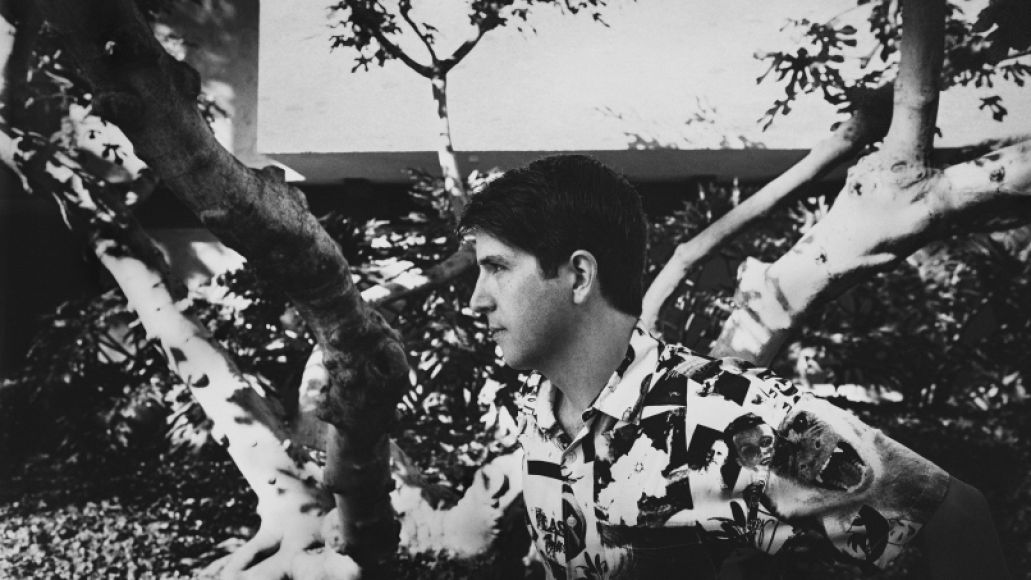 Pallett began playing the violin at the age of three as a likely result of his brother playing the cello, though he notes “having this memory that I think might be false of someone giving me a violin at a bluegrass festival.” As he further discusses his younger musical development, with mentions of Philip Glass and John Cale among others, I comment that this taste is pretty advanced for a child, to which he scoffs, “Well, I was really into rap for a little while, too.”

Pallett eventually says he’s never really acquired a taste for rock music, which is intense considering his band gig for the past decade has been as a recording member, and sometimes touring member, of Arcade Fire, with whom he composed music for the film Her. This brings Pallett to L.A., as he is in town attending the Academy Awards where he was nominated with Will Butler, chosen as the maximum two reps per pub.

“Ultimately, the guys who are all nominated are just people that do the same thing that I do,” Pallett says when asked if the experience was intimidating. “So, what’s the big deal? I don’t think that it is all that crazy to be here. I did wonder if I’d feel like a fish out of water, and the week before I was worried about this dinner we had where I met the other nominees. But they were all really nice and welcoming.”

Pallett didn’t end up with an Oscar, but the award didn’t sound like he was living or dying on the results. His relationship with Arcade Fire in general is more removed than an all-in band member would be, and can be characterized as businesslike, well-aware of his situation but keeping up appearances.

“The reason for getting back with Arcade Fire was really two-fold: They asked, and it seemed like a good idea,” he says. “I missed them socially, I enjoy the music, and their touring is cushier than my own touring. I didn’t do The Suburbs or Neon Bible tours. And they offered me an ultimatum, which is the correct word but it suggests it was more acrimonious. They said, ‘It kind of sucks when you are not around, can you address your schedule so you are always around?’ And I was like, ‘I got too much stuff going on,’ so we kind of parted ways and I would still play live with them whenever we happened to be in the same city. But when we were doing the orchestral elements for Reflektor, Win asked me if I’d join them and I said yes because it seemed like it would be a wonderful thing.”

In Conflict has these sort of decisions to thank for Pallett’s ability to put an album out in the world without too much worry. Or, if there is worry, it is of people liking it and thinking it is good, not needing it to make money.

“What was ruining me was that moment where music made for artistic and personal reasons, like the solo work, becomes the primary source of income,” he says. “It sort of poisons the well. For example, if a writer gives a negative review, it is less about getting my feelings hurt but wondering if this is going to hurt my job. I think a lot of critics forget that. And I really couldn’t get over it. So, as this record was coming together and I was in my 30s now, I realized I didn’t have expansionist policies. I don’t want to be playing to larger audiences than I already am as a solo musician. So, that way of thinking allowed me to take the job because I wanted to continue to make records and not drive myself crazy doing it.

“You are always reading these articles about ‘how to succeed’ and ‘monetizing your music making’,” he adds, “and as soon as you monetize your music making, your life is awful. That is one of the reasons I like working with Arcade Fire is it doesn’t feel like an artistic endeavor. Obviously I’m artistically invested in it and I want them to succeed, but it’s my job. It’s a job I love and it’s a job I wouldn’t trade for anything, but at this point I’m able to make a record like In Conflict and put out ‘The Riverbed’ as my first single and not worry about scaring off all the pussies that listen to my music.”

Pallett laughs loudly at this, going on to note he takes on other day jobs, too, when Arcade Fire isn’t touring the world as they currently are. In between Heartland and In Conflict, the four years were filled with his own touring, arranging 40 records, four film scores, and ten music commissions, including a ballet and a violin concerto. “I took a ski vacation,” he notes dryly.

“There is the feeling that every day I’m spending on someone else’s music is a day I’m not spending on my own,” he says, and though we talked about Drake and Shia LaBeouf and Sun Kil Moon (Pallett notes that he is almost always on the side of the artist in media squabbles), he is able to bring it full circle, empathizing with the celebrities and bringing them into the world In Conflict focuses on, where unhinged states of being are optimal.

“Famous people are walking, talking crazy people,” Pallett says. “Basically what they need is people telling them they are a genius every day or they will have a total meltdown. What do you expect? It is really emotionally damaging and difficult to be doing what they are doing. And when they have a meltdown people feel the need to say he’s having a hissy fit, it’s like, ‘Go fuck yourselves.’”

Owen Pallett: Carrying the Weight of the World