This year marks the 20th anniversary of Oasis’ 1994 debut album, Definitely Maybe. To celebrate, the band’s remastered the 7x Platinum classic for a new deluxe reissue that includes two additional discs of material. Though, before you Anglophiles digest it all, contributing writer Luke Bradley sliced into the band’s discography, studying the many musical references and odes that lace most of their music. So, study up below and definitely, maybe add your own insights in the comments section shortly after.

HERE’S A SONG, IT REMINDS ME OF WHEN WE WERE YOUNG

Sharp feedback dims to reveal a goading Liam Gallagher. “Does it matter if it’s out of tune?” he asks rhetorically, as his brother bickers back, off-mike. Tony Carroll counts in a quicker, simplified version of the descending chords that introduce the Beatles’ “I am the Walrus”. “I yam heeez, you ahr heeez, you ahr real and we ahr all togeth-ah!” In spring, ’94, Liam’s voice is still malleable, fully living up to its frequent billing as “Rotten meets Lennon”. To the older contingent of the crowd, it may come off as a parody of Northern swagger, but to those coming of age in the mid-90’s, Gallagher’s voice is male youth. Oasis are touring in support of their soon to be released debut, Definitely Maybe, 11 anthems for striving, hoping, and standing tall.

Many fans half-expected more than a deluxe reissue package for the 20th anniversary of the first Oasis album, due to different rumours circulating practically every week over the last several months, and with Liam Gallagher himself recently stoking speculation. But even if a reunion is still a ways off, the reissue provides a worthwhile challenge of trying to remember the brief period before the Gallaghers were permanent caricatures. Oasis’ early fusion of timely insight and green songwriting with an ever-present spectre of three decades of UK pop resulted in one of the key albums of its generation. There’s an easy joke to be made about how Oasis’ approach is so studied, they even followed the career blueprint of idols The Stone Roses by only ever releasing one good album. 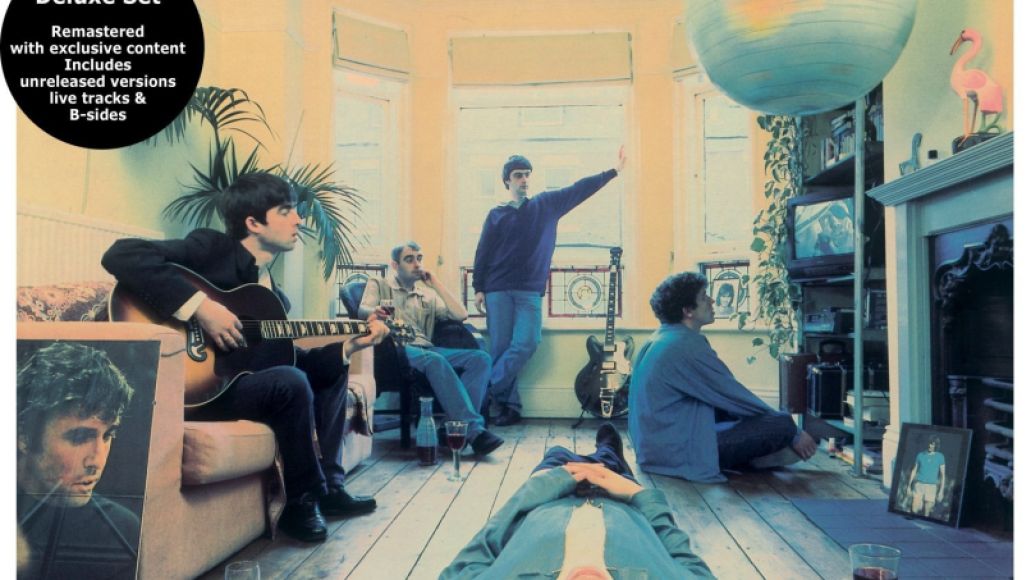 Definitely Maybe is a youth-obsessed album, and the theme seems intensified when returning to the record after witnessing the band’s 12-year creative decline. Liam’s voice has dropped about a dozen octaves in the years since their debut and is now an odd combination of gruff and nasal. One forgets that, as central as Liam’s attitude is to his performances, he used to be a very good singer.

It’s generally accepted that a huge percentage of all rock music from the ‘70s on takes cues from The Beatles, in some shape or form. Yet there are some hallmarks of Beatles songwriting that are so innovative and unique – be it certain kinds of vocal harmonies or embellished guitar chords – that it requires a good deal of premeditation to mimic them. Many Oasis songs sound like the Who, the Kinks, or the Small Faces in a generalized way. The Beatles (and the solo Beatles), though, account for the most sources of explicit, direct plagiarism in the Oasis catalogue.

Definitely Maybe’s release followed three successful singles: “Supersonic”, “Shakermaker” and “Live Forever”. In John Harris’ The Last Party, still the go-to treatment of the Britpop era, the author notes that the marketing for the album marked a break in traditional music industry practices. Definitely Maybe was advertised in football magazines and even match programs, part of an effort to cultivate an Oasis brand and lifestyle from the get-go. Upstart designer Brian Cannon retooled the old black-and-white, boxed Decca recordings logo, as seen on Rolling Stones LPs, for the Oasis wordmark. (A font “inspired” by Noel’s beloved Adidas was attempted, but the result didn’t work visually.) Oasis’ sleeve photography would be a high-gloss, contemporary take on Peter Blake’s pop-art, collagist ethos of the mid-‘60s.

So, from the outset, and not even considering their music, Oasis’ identity was built on recycling. The Definitely Maybe cover features bits and pieces of English pop culture history – a portrait of famed footballer Rodney Marsh, a pack of Benson & Hedges, a Burt Bacharach picture, stained glass in the form of the RAF/mod roundel, and a giant inflatable globe suspiciously like the one Ian Brown iconically batted around onstage at The Stone Roses’ generation-defining Spike Island show. (Several commentators would cite Oasis as one of the groups who picked up the spirit of the Roses once they fizzled after 1990.) Oh, and the whole thing is sepia-toned! 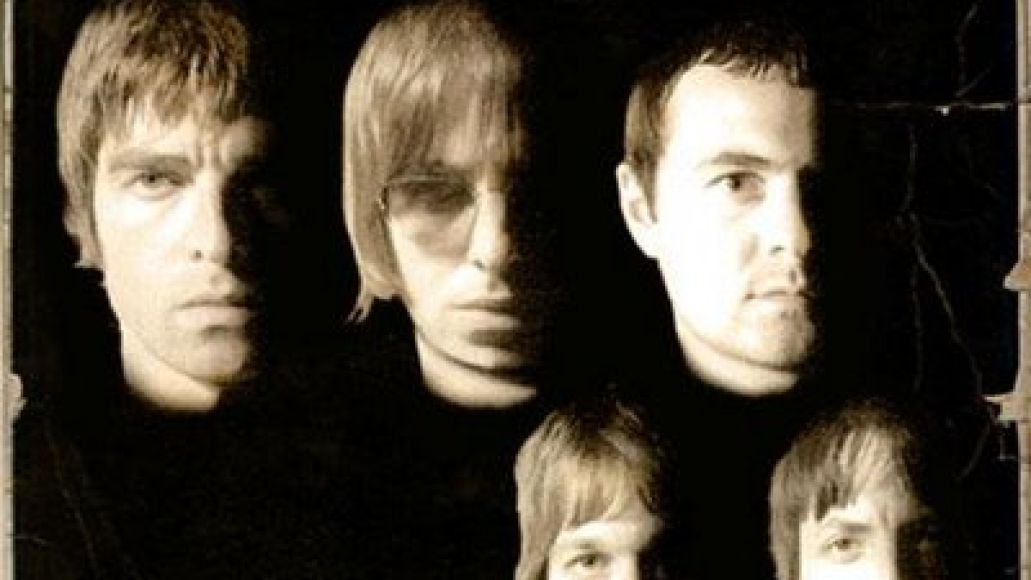 As the group caught fire, they pursued twin strategies of self-promotion. According to Oasis themselves, they were “the new Beatles,” spearheading an enormous, sweeping backwards-looking cultural trend, and also “the best band in the world,” who had arrived to revitalize the British music industry and speak to all walks of youth. For all their cribbed riffs and concepts, the sum of Oasis’ ideas, at least on Definitely Maybe, didn’t really sound as much like the Beatles as one might expect from the media’s comparisons. Oasis did grow out of the band Rain, which also happens to be Noel’s favourite Beatles song. But by 1994, the band had developed their own sound – if not 100% unique, then at least new in its combinations from pop history. Oasis’ early psychedelia blended the ‘60s and late ‘80s acid house versions, as evidenced by the LP standout “Colombia”. Originally appearing in sprawling demo form on the “Supersonic” single, the song was transformed into a faster, steady groove for the album. Noel admits the melody was derived from a house track he likely heard coming of age at the Haçienda, the historic Manchester dance club.

With the first single, “Supersonic”, we get the lyrical nod “you can sail with me in my yellow submarine,” Oasis’ first actual quoting of the Beatles, barely a minute into the band’s recorded career. But the song has a lot more to offer than allusion; its lyrics are about present-tense sensation and promise, more than history. I think one of the keys of Oasis’ appeal, particularly early on, is the careful navigation of Liam’s rebel front and Noel’s romanticism. These contrasts are virtually written into the songs, with minor/major key flip-flopping for verse and chorus being a favourite device of Noel’s. “Supersonic” is the first example of this, beginning with blustery aggression before turning into a celebration, complete with handclaps.

The second Oasis single, “Shakermaker”, ended up costing the band $500,000, such were the “similarities” with “I’d Like to Teach the World to Sing” (better known as “I’d Like to Buy the World a Coke”) by the New Seekers. The real act of brazenness here is that Oasis didn’t even bother to come up with entirely new words to fit the melody. Two lines in “Shakermaker”’s first verse also begin with “I’d like to…”. Noel loads this song, as with so many others, with arpeggiated major 7th chords, recalling “You Can’t Do That” and other A Hard Day’s Night-era Beatles.

If the first two singles were announcements of what was to come, “Live Forever” was a full-on manifesto. Oasis weren’t up-and-coming; they’d already arrived. Here, the stream-of-consciousness, quasi-absurdist lyrics of “Supersonic” and “Shakermaker” are toned down considerably. The result is a striking balance of earnestness and stridency that compliments the most ambitious Oasis melody up to that point. “We see things they’ll never see” is perhaps an update of The Who’s “the simple things you see are all complicated” from the mother of mod anthems, “Substitute”.

Even after Definitely Maybe was finally released, there were still singles to be culled; “Cigarettes and Alcohol” and “Rock ‘N’ Roll Star” are among the most anthemic and self-summarizing songs in the Oasis catalogue. According to interviews, Noel’s peacock-y riff at the core of “Cigarettes” was originally laughed off as unusable by the others in the studio, as it was so close to T-Rex’s “Get It On”.